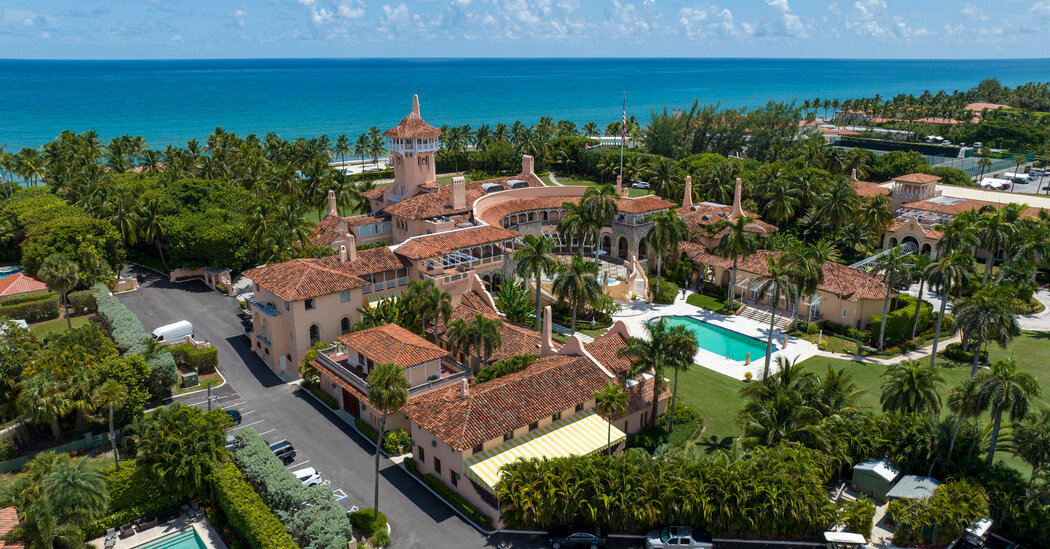 The filing, a detailed list of items retrieved in the search, was unsealed on Friday as part of the court fight over whether to appoint an independent arbiter to review the materials taken by federal agents when they descended on Mr. Trump’s estate, Mar-a-Lago, on Aug. 8.

Along with the empty folders with classified markings, the F.B.I. discovered 40 more empty folders that said they contained sensitive documents the user should “return to staff secretary/military aide,” according to the inventory. It also said that agents found seven documents marked as “top secret” in Mr. Trump’s office and 11 more in a storage room.

The list and an accompanying court filing from the Justice Department did not say whether all the contents of the folders had been recovered. But the filing noted that the inquiry into Mr. Trump’s handling of the documents remained “an active criminal investigation.”

The inventory also sheds further light on how documents marked as classified were stored haphazardly, mixed with everyday items.

The list suggests the files Mr. Trump took to his Florida home were stored in a slapdash manner and appeared to underline concerns that he had not followed rules for protecting national security secrets.

It also offered the clearest indication yet that promises by Mr. Trump’s team that all sensitive records had been returned were untrue.

The inventory listed seven batches of materials taken by the F.B.I. from Mr. Trump’s personal office at Mar-a-Lago that contained government-owned documents and photographs, some marked with classification levels up to “top secret” and some that were not marked as classified. The list also included batches of government records that had been in 26 boxes or containers in a storage room at the compound.

More on the Trump Documents Inquiry

In all, the list said, the F.B.I. retrieved 18 documents marked as top secret, 54 marked as secret, 31 marked as confidential, and 11,179 government documents or photographs without classification markings.

A federal judge in Florida, Aileen M. Cannon, ordered the inventory list to be released during a hearing on Thursday to determine whether to appoint an outside expert known as a special master to review the government records for any that could be privileged. Judge Cannon said that she would issue a written decision on the matter “in due course.”

Mr. Trump appeared to acknowledge on social media this week that he knew that much of this material was at his estate, complaining about a photograph that the Justice Department released on Tuesday night cataloging some of the evidence that had been recovered.

The photograph showed several folders with “top secret” markings and some files with classification markings visible. All the material was arrayed on a carpet near a placard labeled “2A,” presumably to document what was in a box of that number before the F.B.I. removed it from Mar-a-Lago.

A shorter inventory, released earlier, said Box 2A contained materials found in Mr. Trump’s personal office. In a social media post, the former president declared that the folders had been kept in “cartons” rather than “sloppily” left on the floor, suggesting that he had been aware of the presence of the materials.

In May, after extended negotiations between the National Archives and Mr. Trump’s lawyers failed to result in the return of any documents from Mar-a-Lago, the Justice Department issued a grand jury subpoena for all materials marked as classified that remained there. In early June, two lawyers for Mr. Trump turned over some of the records while telling investigators that no others remained.

In the filing on Friday, prosecutors noted that the Justice Department’s review of the materials seized in August was only “a single investigative step” in an “active criminal investigation.”

“The investigative team will continue to use and evaluate the seized materials as it takes further investigative steps, such as through additional witness interviews and grand jury practice,” the filing said.

The government released a less detailed inventory of the seized items three weeks ago, at the same time it unsealed the warrant used to search Mar-a-Lago. And in a court filing this week, the Justice Department revealed that the F.B.I. had found 13 boxes or containers with documents marked as classified, amounting to “over 100 unique documents with classification markings” at the estate.

Shortly after the detailed inventory was unsealed, a spokesman for Mr. Trump, Taylor Budowich, denounced the government on Twitter.

“The new ‘detailed’ inventory list only further proves that this unprecedented and unnecessary raid of President Trump’s home was not some surgical, confined search and retrieval that the Biden administration claims, it was a SMASH AND GRAB,” he wrote.

The expanded inventory did not disclose the specific types of classification markings that were on the documents or give any hints about whether they contained information that could reveal confidential human sources or foreign intelligence surveillance abilities.

By contrast, a redacted version of the affidavit for the search warrant application listed specific classification markings that had been found on documents in 15 boxes of government files that the National Archives removed from Mar-a-Lago in January.

The discovery of files in the trove marked as classified led the archives to make a criminal referral to the Justice Department, prompting what initially began as an investigation into how classified documents were taken to Mar-a-Lago.

That inquiry expanded after the Justice Department retrieved additional documents marked as classified from Mar-a-Lago on June 3 in response to a subpoena. At that time, two lawyers for Mr. Trump told investigators that was all that remained.

The F.B.I., which obtained surveillance footage from Mar-a-Lago and interviewed multiple witnesses, acquired what it said was evidence that additional classified documents were at the property and that the government’s efforts to retrieve them had been obstructed.

In obtaining a search warrant, the bureau described the possibility of three crimes as the basis of its investigation: the unauthorized retention of national security secrets, obstruction and concealing or destroying government documents. None require a document to have been deemed classified, despite Mr. Trump’s repeated and unproven claims that he had declassified everything he took from the Oval Office.

At the hearing on Thursday, the Justice Department said it had performed its own review and set aside more than 500 pages of records that could be protected by attorney-client privilege.

But lawyers for the department fiercely contested Mr. Trump’s request for a review of the materials based on executive privilege, which protects confidential executive branch communications from disclosure.

The lawyers argued that executive privilege could not be used by a former president to keep part of the executive branch, like the department, from reviewing government files as part of its official responsibilities.

Judge Cannon was not entirely persuaded by that argument and left open the possibility that she would grant Mr. Trump a special master to conduct a wide-ranging review, encompassing both attorney-client and executive privilege.