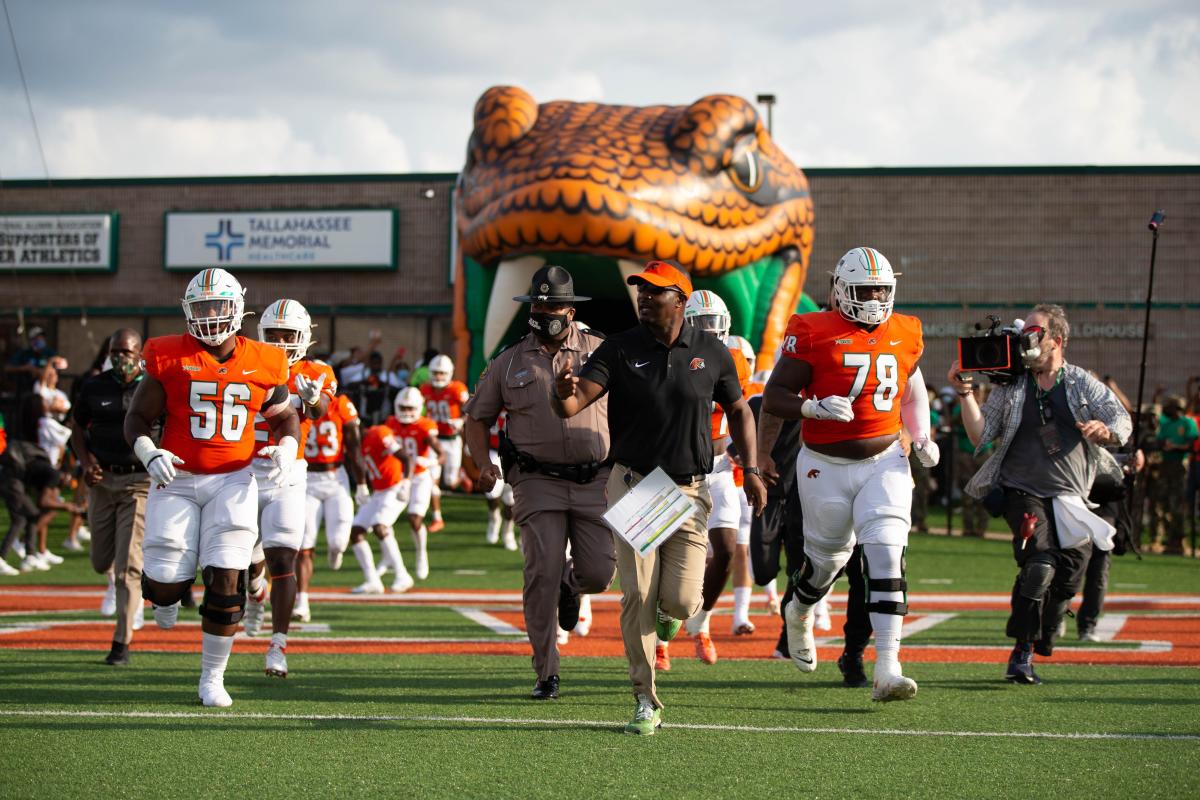 Last Thursday night, FAMU was informed by the NCAA it had 26 uncertified or ineligible players, ruling them out for the Week 0 season opening loss at North Carolina.

The Rattlers’ flight to Chapel Hill, North Carolina, Friday was delayed for over six hours as FAMU and the NCAA attempted to resolve the issues.

FAMU football players shared and expressed their frustrations in a five-page letter that was signed by 89 players. Players said they have been misadvised, underrepresented, and underappreciated.

Hours after the letter began circulating on social media, the university responded in an emailed statement  Monday evening, saying “We are confident that our processes are effective and timely. We will continue to monitor our efforts in this regards and to pursue all avenues to provide an excellent student experience to every athlete.”

Players in their letter also said they plan to continue to kneel post-game in protest during the Marching 100’s playing of the Florida Song and FAMU alma mater until “significant changes that facilitate a positive student-athlete experience are made.”

The team knelt in protest following Saturday’s 56-24 defeat at UNC.

Players also said the narrative of ineligible players is wrong and implies “we are not performing in the classroom.” Players pointed to university procedural issues within the registrar’s office, compliance department and academic advisement.

“We have kept these issues within the university structure, but since they have not been adequately resolved, we will release this statement to the Board of Trustees and Board of Governors,” the letter said.

Land registered for three two-hour credit classes to move closer to obtaining his bachelor’s degree. He took and passed the classes, but was deemed ineligible last week, citing that he needed three more hours to be classified as satisfactory in academic progress.

Land tweeted Sunday that “I can’t wait to suit up with my guys again, but only on God’s timing. To clarify, I am ineligible for a reason out of my control, but I CAN’T AND WON’T be denied.”

The letter stated that FAMU only has one compliance officer that doesn’t have any knowledge or assistance of athletic compliance. With over 300 student-athletes, players questioned how the one-person staff could accurately and swiftly do their task.

“It was very damaging to the morale of our football team to read on various media outlets, ’26 FAMU Football Players Ruled Ineligible,'” the letter said. “At the root of  this issue is the fact that our Academic Advisement and Compliance Officers are understaffed.

“The compliance office consists of one person, who has no expertise in athletic compliance. How can this person be expected to certify over three hundred athletes in a timely manner?”

Players feel they don’t have a voice

FAMU is still conducting final interviews for a new Director of Athletics.

As the university closes in on a new hire, no student-athletes were added to the 18-person search committee on hand. Players mentioned the school’s need to have an open mind by not eliminating candidates that haven’t been previously affiliated with FAMU.

“Concerning the next athletic director, it is our belief that the individual selected should have extensive administrative experience from successful NCAA member institutions, an efficient organizational structure model to address current existing personnel deficits, and a proven track of successful fundraising,” the letter said.

“The idea of placing a person in the position because of ties to FAMU is not appealing to us at all. We need fresh ideas and innovation to achieve the level of excellence that FAMU Athletics is capable of.”

When players make the decision to commit and sign to FAMU, this includes some leaving home for a new location.

Players say the transition has been complicated by late-arriving financial aid. Players said  “We are reportedly told, ‘It’s a new system, and it’s taking longer to post than normal.’ “

Players described these responses in their letter as “completely unacceptable. This delay in funds has repeatedly left us unable to pay for our basic needs.”

Previously, players were credited four tickets for families and friends to attend.

Just a week ago, players were informed that the tickets will be reduced to two tickets per player, which caused families who planned on attending to purchase tickets to the North Carolina game at short notice.

“Our family and support systems should not be burdened in this manner,” the letter said.

“The vast majority of them incur hotel and travel expenses, and the facilitation of game tickets should require minimal effort from our athletic administration.”

Players voiced their FAMU experience has not met expectations or promises.

“Dr. Robinson, when we signed our letters of intent to become student-athletes at FAMU, we agreed to perform at our peak in the classroom, on the field and in the community,” the letter said.

“How can we realistically be expected to perform at a high level when we’re concerned with having adequate academic resources and whether or not we will have a roof over our heads and nourishing for our bodies.”

In a statement released by the university Saturday morning, President Robinson promised change.

“The issues raised by these young men will get our full time and attention and will be prioritized by our recently established Athletics Support Committee, which includes administrators and staff from throughout the University community, These matters will be a standing agenda item at my weekly Senior Leadership Team meetings.  We will see progress.

On Monday night, the FAMU released a statement in response to Rattler football’s letter to the president.

In its reply, the compliance team claimed to have properly made assessments to complete the NCAA certification process on Aug. 11 and submitting waivers on Aug. 13— nearly two weeks prior to the Aug. 25 ineligible rulings and first kickoff at North Carolina.

The university said said 13 of the Rattlers’ 14 sports programs met the Academic Progress Rate (APR) requirements per the NCAA’s November 2021 APR Report in “spite of rumors and misinformation to the contrary.”

The FAMU football team, according to NCAA data released in June, did not satisfy the 930 threshold requirement at 901 – the lowest mark in Division I.

“FAMU is committed to upholding high standards and rigorous adherence to NCAA guidelines,” the university said in its release.

Gerald Thomas III covers FAMU athletics for the Tallahassee Democrat. Contact him via email at [email protected] or on Twitter @3peatgee.