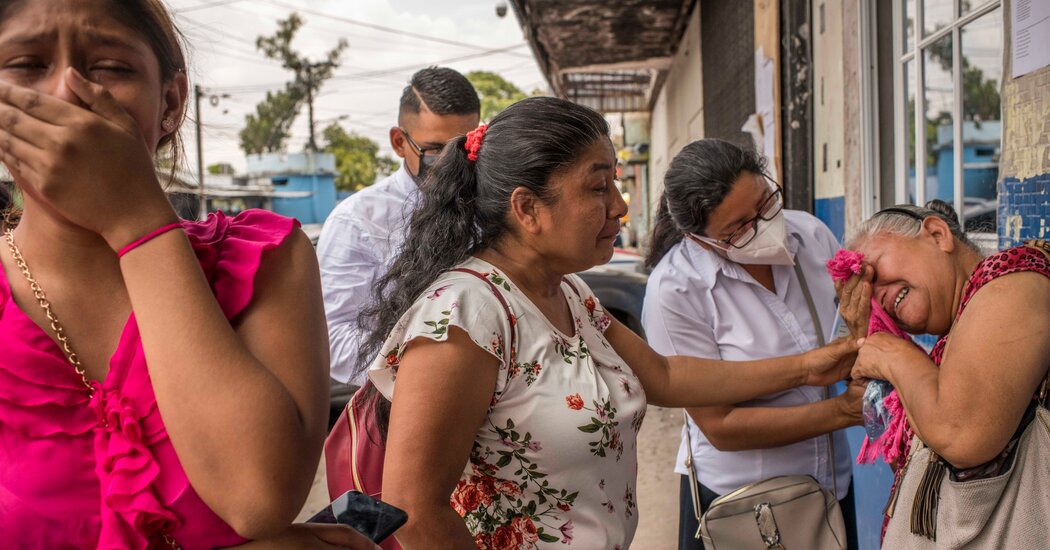 SAN SALVADOR, El Salvador — A 19-year-old stumbled out of a police car and fell into the arms of his girlfriend, who stole a desperate kiss. His older sister, watching, cried out. Seconds later, the young man, Irvin Antonio Hernández, was gone, dragged into the prison across the street.

The two women collapsed onto a nearby wooden bench next to strangers who understood better than anyone what had just happened. Their sons had all disappeared behind those same walls.

Following a record-setting weekend of gang killings in March, the Salvadoran government declared a state of emergency and suspended civil liberties guaranteed in the constitution. The campaign of mass arrests that ensued led to the imprisonment of more than 25,000 people in about a month and a half.

Many of those detained have been sent to a prison known as “El Penalito,” or “little prison,” a dilapidated building in the capital, San Salvador, that has become ground zero for perhaps the most aggressive police crackdown in the Central American country’s history. It is a first stop in what could be a long stay inside the country’s overcrowded prison system.

Many inmates spend anywhere from days to weeks inside El Penalito before being transferred to a maximum-security facility. After the crackdown, relatives of those detained started to gather on the street outside, waiting to find out what would happen next.

On a recent Thursday, dozens of mothers, grandmothers, sisters, and girlfriends crowded around rickety wooden tables facing the prison, hunched over handbags stuffed with the documents they hoped would prove their loved ones’ innocence — government identity cards, school records, work badges.

Maria Elena Landaverde took vacation days and persuaded a friend to drive her at the break of dawn to try to catch a glimpse of a boy who was picked up while bringing his family breakfast. Morena Guadalupe de Sandoval rushed over when her son called to say police officers had pulled him off a bus home from his janitor job in the city. Edith Amaya said she saw bruises on her son’s face before the cops took him away.

“We want to see him one more time,” said Ms. de Sandoval, sobbing next to her own mother, who helped raise her son, Jonathan González López. “Here, we’re all crying mothers.”

The question Ms. de Sandoval keeps asking herself is whether anyone cares. El Salvador’s president, Nayib Bukele, has conceded that innocents are being swept up in the crackdown, but insists they’re a small share of arrests. And the vast majority of Salvadorans — more than 80 percent, surveys show — support Mr. Bukele and approve of the government’s extreme measures.

Hatred of the gangs runs so deep in El Salvador that many want them subdued by any means necessary. Local and international media have broadcast images of family members begging the police for information about their sons and screaming as they’re taken away. So far, nothing has turned the tide of public opinion against the campaign of mass arrests or the president leading it.

But while the women searching for their sons in Salvadoran prisons are by no means an organized political group, their anger should not be underestimated, experts say.

Mothers in mourning have a history of banding together in Latin America, sparking more enduring challenges to autocratic governments.

For now, the women outside El Penalito are focused on keeping their sons fed. Mr. Bukele has bragged about rationing food to prisoners during the crackdown, so many families opt to buy their relatives meals from a government-authorized kitchen with a small outpost open outside the prison.

There used to be just one meal provider for everyone, but after so many arrests in recent weeks, another outfit next door was allowed to begin serving food and supply other necessities like toothpaste and boxers.

“It’s because of the whole monopoly thing,” said one of the women working in the original kitchen, who refused to give her name for fear of reprisals. Relatives of inmates had complained in the past about giving one business the exclusive right to provide breakfast, lunch and dinner, local media reported.

The women outside the prison learn a lot from the employees at the two meal providers, who are often among the first to know when inmates are transferred out of their holding cells and into another prison. Family members get much less out of the prison itself, which staffs a small window to respond to questions but offers few answers.

“We don’t know anything,” said Ms. de Sandoval. She held up a Burger King badge with a picture of her baby-faced son, Jonathan. “He doesn’t belong to any gang,” she insisted. Before his arrest, the 21-year-old worked at a different restaurant in the capital, his mother said, as a janitor.

Mr. González’s girlfriend, sitting next to Ms. de Sandoval, is now caring for their toddler without the help of his income. “What is she going to do?” Ms. de Sandoval asked. “We are poor. Who is going to help us?”

It has been difficult to determine how the Salvadoran police have identified their targets, because the detentions have been so rapid and widespread. The government would not grant an interview with the head of the national police, but relatives of those arrested during the state of emergency said in interviews that many were targeted if they had past run-ins with the police.

Irvin Antonio Hernández was arrested when he ran outside after his little sister, who had toddled after the family dogs. Mr. Hernández, shirtless and shoeless, ended up in handcuffs.

“The only thing they said was ‘kid, come over here’,” said Noemí Hernández, his older sister. “‘Put on shoes and a shirt and we’re going’.”

Mr. Hernández was arrested several years ago, his mother said, when she says two gang members running from the cops ducked into their house. The boy was taken away, too, though Ms. Hernández said her brother had nothing to do with the gang.

“He studied up until the ninth grade, and now he works,” she said, tears seeping through her mask. “He sells fruit and vegetables and has his own house.”

“We the poor put him there!” she said, referring to the president. “But we the poor are suffering now.”

In 2019, Ms. Aquino, 30, was disgusted with the political class in El Salvador and happily voted for the young Mr. Bukele. She called him “my president” and said people who worry about respecting the rights of gang members are absurd.

“A gangster doesn’t respect anything, he doesn’t think of me,” she said. Her mother used to sell sandwiches at a local market, and ran herself into the ground trying to make money and also cover the extortion fees a gang charged. At the end of the year, Ms. Aquino said, the gangs demanded that her mother give them a Christmas bonus.

“If you don’t pay, they kill you,” Ms. Aquino said. Even if you do pay, she said, you aren’t safe in El Salvador. Innocent bystanders get killed in crossfire from gang shootings all the time, she said.

She was outside the facility that day because her brother was recently arrested under suspicion of being a gang member, she said. But she insisted that he repairs appliances, and goes to work every day.

Ms. Aquino still stood behind the president and believed he has made the country a better place to live. Still, the arbitrariness of his brand of justice was starting to wear on her.

“He has helped a lot,” Ms. Aquino said. “But that help has come at the cost of many mothers’ tears.”