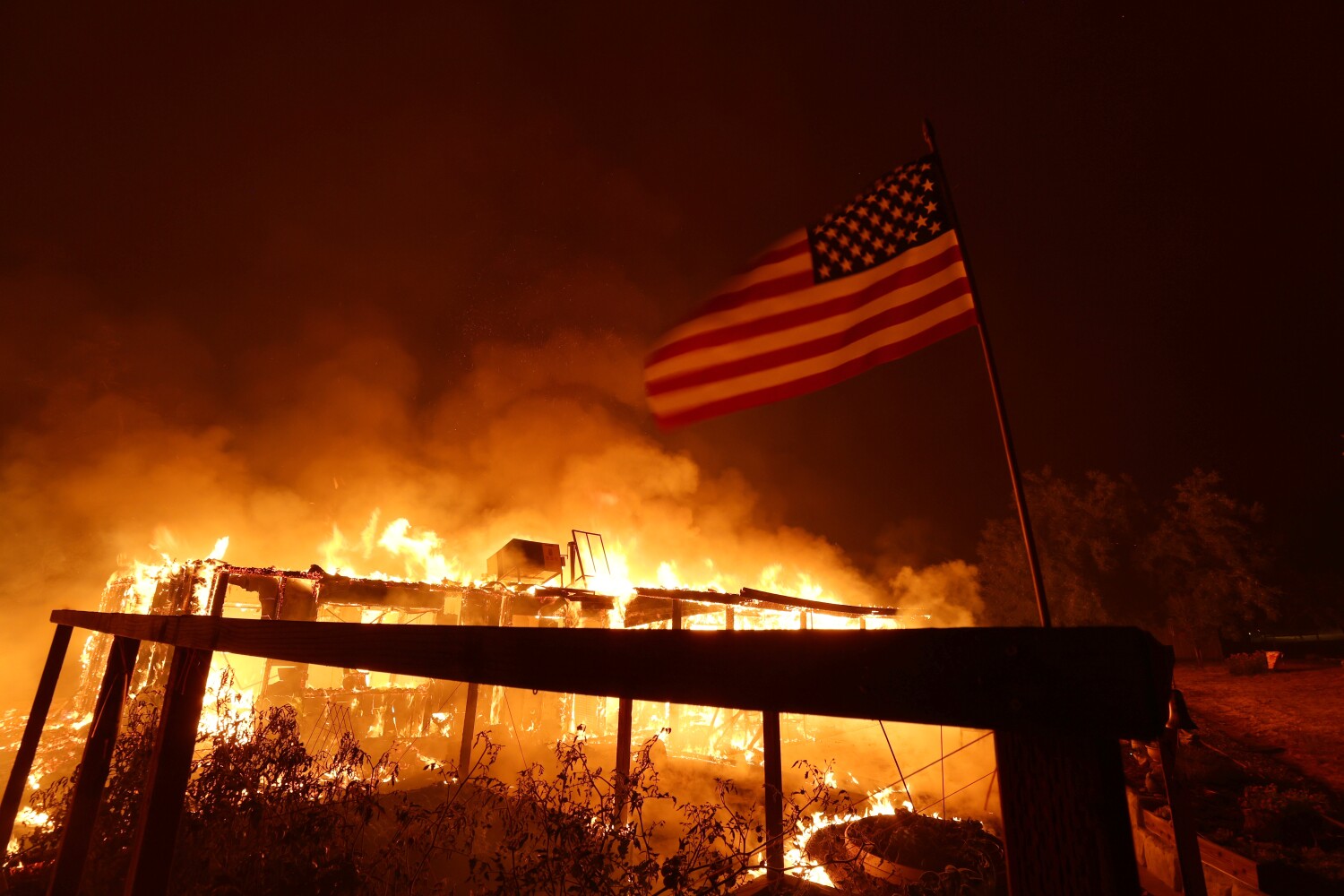 Firefighters were struggling to battle California’s largest fire of the season so far, a fast-moving inferno tearing through the Sierra Nevada foothills west of Yosemite National Park that has burned at least 10 structures, forced several thousand people to flee their homes and is threatening multiple mountain communities.

The Oak fire, which started Friday near Midpines and had spread to 11,900 acres by early Saturday evening, marked an ominous start to the state’s peak wildfire season, with more dangerous blazes expected due to a combination of drought, climate change and overgrown vegetation that has increased the likelihood of fires igniting quickly and spreading rapidly.

It came as much of the globe was in the grip of extreme heat, with record-breaking temperatures fueling fires across Europe and prompting alerts in large swaths of the United States and China.

“The troops out on the ground have got a really tough situation right now to deal with,” said Kim Zagaris, former state fire and rescue chief for the California Governor’s Office of Emergency Services who now works as advisor for the Western Fire Chiefs Assn.

“Mother Nature throws a lot at us,” Zagaris said. “Aviation resources and the wildland community are stretched even thinner in today’s day and age — and not just us, but all across the world.”

The blaze was one in a string of fires to hit the area in recent weeks. About seven miles to the southwest, the Agua fire burned 421 acres and destroyed three structures after it was sparked by a vehicle crash Monday. About 17 miles to the east, firefighters reported 79% containment of the Washburn fire burning in Yosemite National Park, having threatened a grove of giant sequoias and scorching 4,856 acres since July 7.

But those fires were rapidly outpaced by the Oak fire, which sent up a pyrocumulus cloud so large it could be seen from space and darkened skies with smoke for hundreds of miles, prompting air quality advisories as far away as Barstow and the Victor Valley. Its cause remains under investigation.

In the historic Yosemite-gateway town of Mariposa, residents and businesspeople kept a wary eye to the east as the familiar rhythms of evacuation returned.

“There’s a very ominous cloud of smoke over the hill,” said Aanthony Lerma, tour and volunteer director for the Mariposa Museum & Historical Center.

“I grew up here. I’m used to fires and procedures,” he said. “I’ve been evacuated a few times myself. I just pray that families over that way are safe.”

Lerma said he opened the museum Saturday morning for its president, a high school teacher, and his wife, who had to evacuate their home.

“They’re going to be camped out in the classroom today,” Lerma said. “They’re trying to stay safe and pray their house doesn’t burn down.”

For evacuees, lodging in town was scarce, forcing many to head toward the valley.

Wildt said many of the usual weekend tourists visiting Yosemite had canceled because of the fire, but the vacancies quickly filled with locals.

“Today we have a bunch of fire crews looking for rooms,” Wildt said. “We don’t have them. I believe most of town is full.”

Caleb Salas, manager of H&H Lumber, was on the job despite his home in Lushmeadows being under an evacuation order.

“Half my staff are out,” Salas said. “Who knows where they went — Clovis, Sonora.”

Salas said he thought his home was still safe, but he was worried about animals he’d had to leave behind: ducks, pigs and a cat that wouldn’t come to him.

The fire was reported around 2 p.m. Friday near Highway 140 and Carstens Road and quickly spread to the north, south and east at what officials described as a dangerous rate. It was being fueled primarily by dense, dry vegetation and fanned by steep terrain, officials said.

Parts of the Central Valley have endured 13 consecutive days of triple-digit heat, although temperatures in the low to mid-90s prevailed in the higher-elevation area where the fire started, said Felix Castro, meteorologist with the National Weather Service in Hanford.

The air was very dry, with a relative humidity of 8% or 9%, and that combined with the ongoing extreme drought meant vegetation had reached near-record dryness, he said. A recent study found this to be the driest 22-year period in at least 1,200 years and concluded the conditions have been intensified by temperatures sent rising due to greenhouse gasses accumulating in the atmosphere.

“Our drought indices are about as low as they can get, including the last two to three years, for much of our region, with the greatest dryness in the Sierra,” Castro said.

Flames chewed through parched grass, brush and woodland oak, advancing into timber stands littered with conifers killed by both drought and bark beetle infestations, to which drought-weakened trees are more susceptible, fire officials said. These dead conifers tend to carpet the ground with needles and are more likely to fall over both before and during fires, helping to carry flames higher up into canopies and posing a risk to firefighters, Zagaris said.

The dry, dead trees are particularly combustible and release large amounts of energy as they burn, stoking the massive cloud of smoke and ash that could be seen for miles over the fire, he said. Such clouds are capable of making their own weather.

“When you get a pyrocumulus column, it can pick up a pretty good-sized branch and actually draw it aloft into the column and in some cases drop it a mile or two miles down the head of the fire, which starts additional spot fires,” Zagaris said.

These columns eventually collapse, dropping air and debris instead of sucking them up, spreading flames in all directions and creating dangerous conditions for personnel on the ground, he said.

Firefighters on Saturday were “dealing with explosive fire activity,” said Natasha Fouts, public information officer with the California Department of Forestry and Fire Protection. That included long-range spotting, in which embers are hurled miles ahead of the fire, as well as area ignition, in which swaths of land go up in flames after the embers land in dry fuel beds, she said. About 403 personnel were assigned to the blaze, with more on the way, Fouts said. They were chiefly focused on protecting structures and getting fire lines established, she said.

The fire was threatening the communities of Lushmeadows, Midpines, Jerseydale and Bootjack, from which about 6,062 people had been evacuated as of Saturday afternoon, officials said. No injuries had been reported, although at least 10 structures had been destroyed and another 2,000 were threatened. Gov. Gavin Newsom proclaimed a state of emergency in the county.

The fire’s rapid progression in its first hours forced officials to move an evacuation center from the New Life Christian Fellowship church, which had been used in prior fires, to Mariposa Elementary School.

By noon Saturday, more than 60 people had checked in to the evacuation center at the school, said Taylor Poisall, spokeswoman for the American Red Cross of Central California.

Beds with privacy screens were set up in the school cafeteria and three daily meals are being served, Poisall said. A pet shelter was also opened at the school by the Central California Animal Disaster Team.

“We had a lot of people evacuate last night with their animals,” Poisall said. “Animals are family too.”

Emmanuel Scudder and his son-in-law Israel Lopez were driving to a Christian men’s conference in San Jose on Friday afternoon when his wife, Jaimie, called to tell him she had received a fire warning from Mariposa County.

It did not seem threatening then, but half an hour later she called back.

“Turn your butts around,” she told him. “We have to get the animals.”

Scudder, a chaplain for the nonprofit Merced County Jail Ministry, arrived at his home in Bootjack 2 ½ hours later to find that his wife and a friend had corralled the four dogs and three of the cats. The barn cat was missing.

“I called the Sheriff’s Department last night,” Scudder said. “They said they would get somebody on it.”

“The firemen found our fourth cat and let us know today,” he said.

Scudder is now staying at the evacuee center with the two large dogs. The rest of the family and pets have gone to stay in Tracy, he said.

Of the house, he has no information.

“As of last night they saved it,” he said. Since 8 a.m. Saturday he has not had an update.

“I’m glad everyone in our family is safe and the animals are safe,” he said. “The property we can replace.”