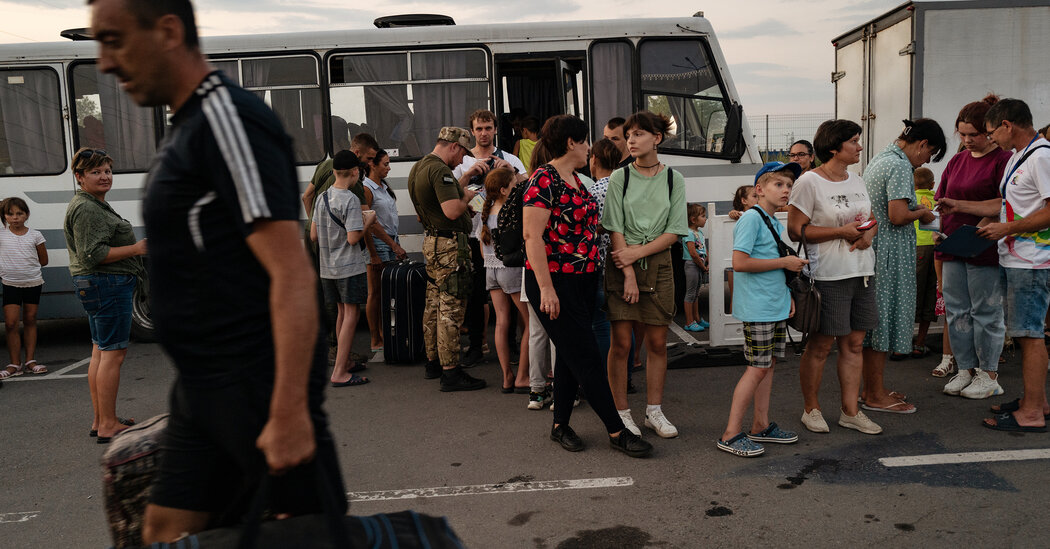 KYIV, Ukraine — As a team of international nuclear experts arrived in Ukraine’s capital on Tuesday hoping to ensure the safety of an imperiled nuclear plant, a senior Ukrainian official warned that many challenges remained to the team’s mission, not least finding safe passage through an active battlefield to the Russian-occupied facility.

Fourteen experts with the International Atomic Energy Agency, the United Nations nuclear watchdog, landed in Ukraine this week, where they are confronted by one of the most complicated missions in the agency’s history. The I.A.E.A. has also worked in Iraq, Iran and North Korea.

To reach the occupied facility, the Zaporizhzhia nuclear power plant, the team must negotiate the craters and trenches of the front and enter an area where frequent shelling has raised fears of a possible nuclear catastrophe.

Before the experts set out for the nuclear plant, Europe’s largest, they tried to broker some kind of deal with the combatants in a six-month war that is intensifying in the south, where Ukraine is escalating strikes in what could be part of broader counteroffensive.

Both Russia, whose forces seized the plant not long after invading, and Ukraine, whose military holds positions only a few miles away, say they support the I.A.E.A. mission. But they have disagreed on how it should be carried out. Russian officials have ignored pleas to withdraw from the facility to create a demilitarized zone around it.

Mykhailo Podolyak, an adviser to Ukraine’s president, said in an interview on Tuesday that key aspects of the negotiations were in question, among them the route to the facility. He said he was still hopeful, however, that the monitors would reach the plant “one way or another.”

A spokesman for the I.A.E.A. did not immediately respond to a request for comment on the status of the negotiations.

Conditions at the plant have been unraveling for weeks.

On Monday, it was shrouded in smoke from wildfires, ignited by combat nearby, and imagery released by a commercial satellite company showed blackened holes, punched by artillery, in the roof of one building. Overnight, Ukrainian officials said, rockets struck the Ukrainian-controlled town of Nikopol, across a reservoir formed by the dammed Dnipro River from the power plant.

Mr. Podolyak said that Russian forces had fired artillery at possible routes the monitors could travel to cross the front line and reach the nuclear plant. Fighting intensified sharply in the south on Monday, but the shelling at access routes seemed intentional, he said, and did not appear to be stray projectiles from the combat.

“The Russians are trying to put some psychological pressure on the delegation, so they panic” and cancel the visit, he said.

Russian officials did not comment on the claim, but they have regularly blamed Ukraine for the shelling around the plant. Ukraine in turn has accused Russia of using the plant’s buildings as cover to launch artillery strikes at Ukrainian positions, and of staging explosions in the area that it then ties to Ukraine.

The contradictory claims and relentless shelling have made it impossible for United Nations experts to determine from afar what exactly is going on, and they have made increasingly desperate pleas to assess the plant in person.

Ukraine has insisted that the inspectors start out from territory it controls, to avoid giving legitimacy to the Russian occupation, meaning that inspectors must pass through frontline positions. “I underscore that for Ukraine, it’s really crucial that the mission travels through its territory and is not under any influence from Russia,” Mr. Podolyak said.

Ukrainian officials say that the nuclear plant’s staff is overtaxed and working under duress, adding to fears that either the fighting or an internal accident could cause a radiation leak. The United States, backing Ukraine, has supported creating a demilitarized area around the plant, and on Monday called for a controlled shutdown of the two remaining active reactors.

“A nuclear power plant is not the appropriate location for combat operations,” said the spokesman for the National Security Council, John F. Kirby. Cycling down the active reactors, he said, is “the safest option.”

Mr. Podolyak said it was important that the I.A.E.A. experts do a top-to-bottom review of infrastructure and safety equipment at the plant because workers there are under increasing strain. Ukrainian officials have accused Russian forces of subjecting the plant’s staff to harsh interrogations, even torture, and of holding some of them at the site against their will. Employees who fled to Ukrainian-controlled territory have said that Russian soldiers have parked armored vehicles in two machine rooms near reactors.

The I.A.E.A. has said that its team will check safety systems, assess damage to the plant and evaluate the staff’s working conditions. Among the main concerns is that fires or other damage could cause cooling systems to fail and lead to a nuclear meltdown.

Reflecting the growing fears, the European Union on Tuesday announced it would donate 5.5 million potassium iodide tablets to Ukraine. Ukrainian officials had already begun distributing pills as a precaution to protect people living within 35 miles of the plant.

“No nuclear power plant should ever be used as a war theater,” the E.U.’s top official for crisis management, Janez Lenarcic, said Tuesday. “It is unacceptable that civilian lives are put in danger. We will continue to be on the lookout and stand ready to act.”

As the inspectors arrived in the capital, Kyiv, Ukraine’s military pounded targets across the south on Tuesday, saying its forces had broken through Russia’s first line of defense at multiple points along the front in the occupied Kherson region. But officials offered little detail and their claims could not be independently verified.

It remained unclear whether the strikes marked the start of a long-anticipated broad counteroffensive or were simply an intensification of efforts to disrupt Russia’s supply lines and isolate its forces.

The southern front stretches across a vast landscape of farms, fields and grassland, and includes territory that Moscow’s forces seized in the initial phase of their invasion. Ukraine has staged sporadic counterattacks in the region for months — including using long-range weapons supplied by Western allies to strike behind Russian lines — and Russia has heavily reinforced its positions.

By early August, military analysts estimated that Russia had as many as 25,000 soldiers west of the Dnipro River in the Kherson region, forming three defensive lines. Those forces now seem to be the most vulnerable, as Ukraine appears able to strike all of the major river crossings that Russia needs to supply those troops.

Overnight and into Tuesday morning, witnesses reported explosions at multiple river crossings, including around the Antonivsky Bridge, the main crossing into the city of Kherson, the only regional capital under Russian occupation.

The Ukrainian military high command has maintained a general silence on troop movements. Natalia Humeniuk, spokeswoman for the Ukrainian military’s southern command, declined to name any locations where Ukrainian forces had advanced or any villages that had been recaptured. Doing so, she said, could make them targets.

Russia at first denied that the Ukrainians were engaged in offensive operations in Kherson, then said that all enemy thrusts had been repelled at significant cost to the Ukrainians — but offered no evidence to support the claim. On Tuesday, the Kremlin spokesman, Dmitry S. Peskov, said Russia’s “military operation” was going according to plan.

Kirill Stremousov, the Russian-appointed proxy leader in Kherson, said the open terrain could leave the Ukrainians exposed. “This region can become a real trap for the Ukrainian forces,” he said in a statement.