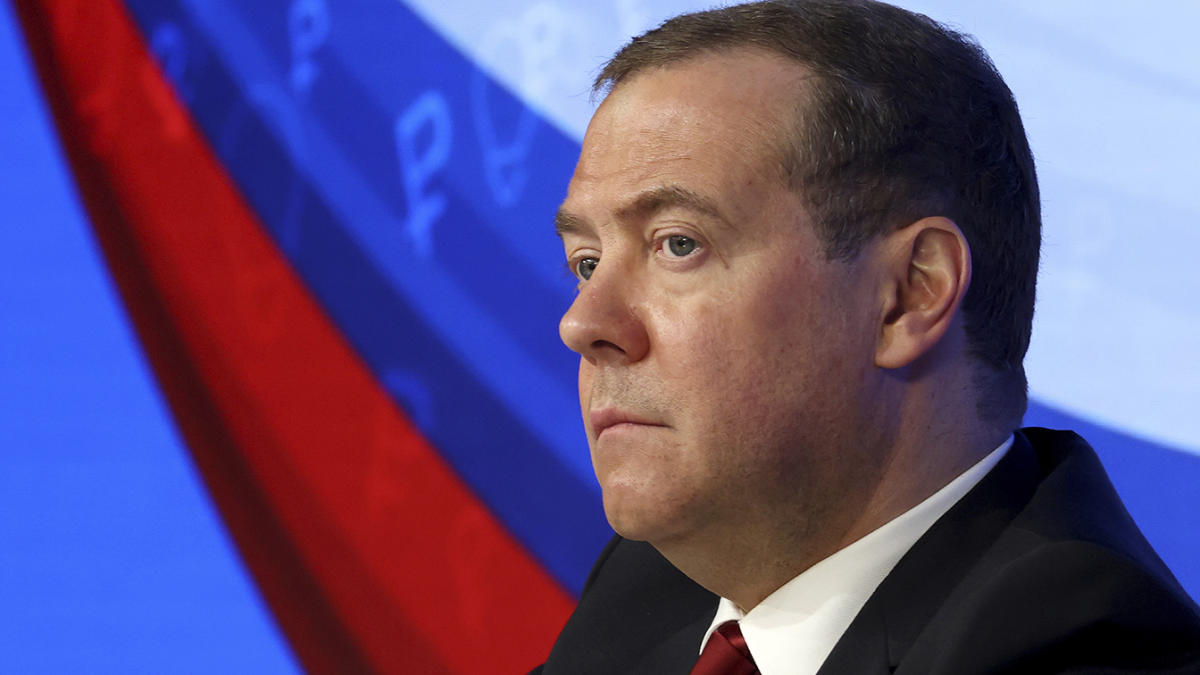 WASHINGTON — Once known as a moderating influence within the Kremlin, former Russian President and current top Kremlin security adviser Dmitry Medvedev has recently emerged as a strikingly bellicose presence, using lengthy, hard-edged posts on the social media network Telegram to justify the invasion of Ukraine, revise 20th century history and threaten the West with nuclear war.

In a post from late July, Medvedev described Ukrainian President Volodymyr Zelensky as under the influence of “psychotropic substances.” In another, he said that American democracy was little more than the totalitarian dystopia described in “Animal Farm,” George Orwell’s famous novel.

“If someone does not agree, he will be deprived of rations, crushed or sent to the slaughterhouse,” Medvedev wrote. In the same post, he accused Americans (and their British “lackeys”) of touting their exceptionalism with “Nazi delight.”

It has all amounted to what Russia scholar and podcaster Mark Galleoti calls “hysterical hawkishness” meant to raise Medvedev’s profile among the siloviki (loosely, “tough guys”) around President Vladimir Putin.

“I think he thinks he has to overcompensate and sound even more deranged than them,” Galleoti told Yahoo News. “And, humans being humans and thus prone to self-justification, he may even be making himself believe it.”

At the very least, Medvedev appears aware that his new persona comes across as discordant — a fact that does not appear to bother him. “People often ask me why my Telegram posts are so harsh,” he wrote in June, in seeming answer to his critics. “The answer is that I hate them. They are bastards and scum.”

In one recent post on VKontakte, another social media network popular with Russians, Medvedev suggested that the Kremlin had designs on Georgia and Kazakhstan, both former Soviet republics like Ukraine. “All nations inhabiting the once great and mighty Soviet Union will once again live together in friendship and understanding,” Medvedev wrote, promising that the “mistake of the early 1990s” — that is, the dissolution of the USSR — “will be corrected.”

The post was quickly deleted, with Medvedev claiming that he was hacked, but the incident only added to the litany of absurdly ahistorical claims and over-the-top threats that have puzzled observers who remember the once-affable Medvedev as a pro-Western moderate far more accessible than Putin, who served as both his predecessor and successor in the Kremlin.

Lately, Medvedev seems intent on imitating Putin’s belligerence — perhaps in hopes of eventually replacing him. The performance has left many in the West stunned, given how unlikely that effort is to succeed — and how much it has cost Medvedev, who once consorted with Western elites at Davos, in global reputation.

“He is opportunistically trying to rebrand himself. And what he’s actually done is, he’s become kind of a vanguard for some of the more extreme views and narratives in the Kremlin, making them mainstream,” Russia expert Samuel Ramani told Yahoo News.

According to Nina Khrushcheva, an international affairs expert at the New School, Medvedev is not influential or savvy enough to overtake Kremlin rivals for power, such as security chief Nikolai Patrushev or Sergey Kiriyenko. But even if he will never rule Russia again, Medvedev’s shows of zeal for the Ukraine war may be necessary to keep him from becoming irrelevant, an unthinkable proposition for someone whose life has been so closely associated with Putin’s nationalistic project. “He may be saying all this to assure that he is not eliminated for disloyalty,” she wrote to Yahoo News in an email.

Whatever the case, Medvedev is making his views known, in what has amounted to a disturbing exercise in geopolitical rebranding.

“Even by the standards of the Putin regime, this man is distinctly unhinged,” European diplomat Carl Bildt wrote on Twitter after Medvedev warned of a potential nuclear war if the International Criminal Court were to take action against Russia for alleged atrocities committed on the battlefield.

“The Fall and Fall of Dmitry Medvedev,” ran a recent headline in Foreign Policy, reflecting the profound disappointment in a man once invested with Western hopes of reform — hopes that, today, seem like little more than fantasy. Thirteen years before, the same outlet had described him as “Russia’s geek-in-chief.”

An attorney by training, Medvedev is, like Putin, a native of St. Petersburg. The two met in 1990, with Medvedev serving as a consigliere to Putin as he ascended to the ranks of Russian power. Medvedev rose with him, coming to serve as Russia’s president between 2008 and 2012, an interval that would allow Putin to return as Russia’s leader after a constitutionally mandated hiatus. (In 2020, Putin changed the Russian Constitution to allow himself to effectively serve in perpetuity.)

During his time as Russia’s leader, Medvedev never materialized into the reformer some in the West had expected, although he broke with Putin over offering support to Libyan strongman Moammar Gadhafi. And in a foreshadowing of his Telegram habits, Medvedev was criticized in 2011 for retweeting a message likening a political opponent to a “stupid sheep getting f***ed in the mouth.” The Kremlin blamed the retweet on a low-level tech support employee, and the obscene post was deleted amid the controversy.

The target of that message was Alexander Navalny, then emerging as the leading critic of what Russia had become under Putin. In 2017, Navalny released a 40-minute documentary alleging that Medvedev had engaged in corruption on an astonishing scale. Although corruption was hardly unusual among the nation’s political and business leaders, Medvedev was the country’s prime minister, one who had labored — however unsuccessfully — to present a friendly image to the West.

“He owns huge plots of land in the most elite areas; he manages yachts, apartments in old mansions, agricultural complexes and wineries in Russia and abroad,” Navalny wrote in an accompanying report. “All this property was purchased with bribes from oligarchs and loans from state banks.”

In early 2020, Medvedev resigned as Russia’s prime minister, in what was widely seen as a demotion precipitated by a loss of confidence by Putin. He was appointed to the Security Council, the position he held a year later when Russia decided to invade Ukraine.

Here Medvedev saw his chance. With Russia increasingly isolated, he took to Telegram to make the case for invading Ukraine — and much else.

“The frenzied Russophobia of the West will apparently never reach bottom,” he wrote in his first message, posted on March 17, as Russia’s initial offensive ground to a halt and the generals and janissaries around Putin looked for someone to blame. If nothing else, Medvedev had an answer, and he was willing to share it.

Four days later, in a post viewed some 938,000 times, Medvedev called Poland’s leaders “political imbeciles” for siding with the West against Ukraine. The post sparked concerns of a broader conflict in Eastern Europe, since Poland had become an epicenter of refugees fleeing Ukraine and of Western weapons flowing to the front. Any attack on Poland, a NATO member, would thus spark the kind of continent-wide war some had feared from the very start. “We should take this seriously,” Ukraine expert Alina Polyakova, head of the Center for European Policy Analysis, said of Medvedev’s disconcerting message.

In April, he mockingly contrasted the green energy vows made by Western nations to the anxieties posed by sanctions against Russian gas and oil: “I think the day is not far off when a smiling Greta Thunberg will appear in Europe in advertisements for American gas stations,” Medvedev wrote, adding a smiley face emoji for emphasis.

Critics have long accused Medvedev of heavy drinking, and there have been other allegations about his personal life. Nevertheless, he appears determined to rehabilitate his image with Putin. Whether he can do so, and rise in the Kremlin once again, is another matter.

“I don’t think Medvedev is seriously imagining he has another shot at the presidency,” says Galeotti, whose “In Moscow’s Shadows” podcast often delves into Kremlin intrigues. “I think he’s just desperately trying to cling on to some relevance.”

As any social media user knows, online provocation is one way to attract attention — and Medvedev certainly appears expert in that regard.

In a June post, he referenced Ukraine’s demand for a lend-lease energy program lasting through the fall of 2023, to help blunt the impact of sanctions on Russian oil and gas. “But who said,” he mused, “that there will be a Ukraine at all in two years on a map of the world?”