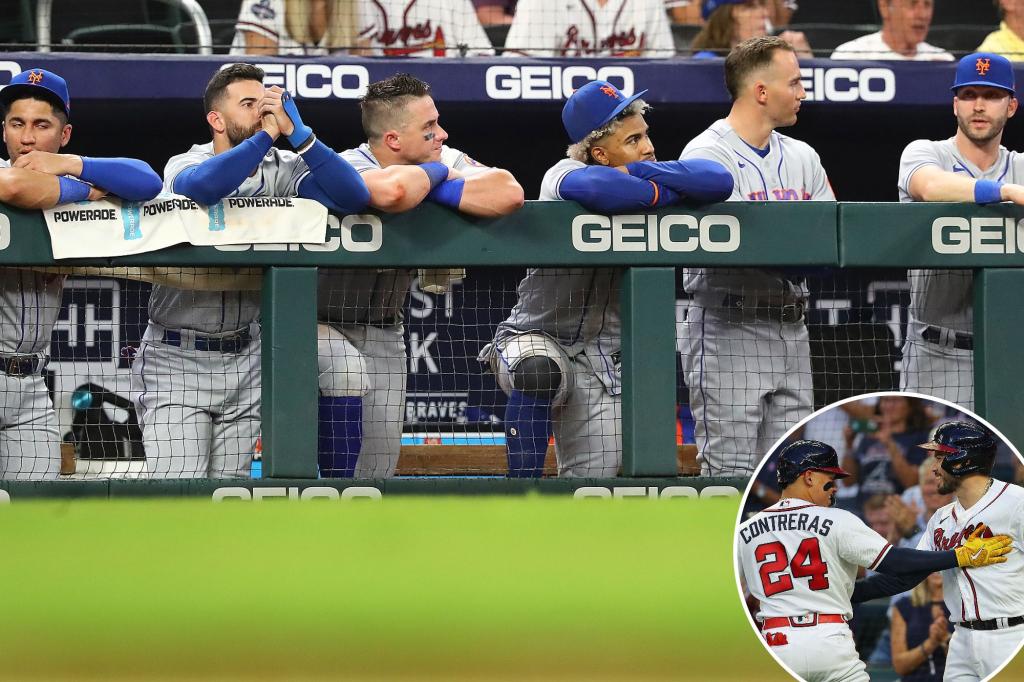 The Mets could not have had a less enjoyable day and night in Atlanta, even before this ungodly mess of a blowout took full form. They sat through a 55-minute rain delay, then watched 13-game winner Carlos Carrasco exit with left-side tightness hours after the bad news hit on Luis Guillorme’s groin.

To add insult to those injuries, Edwin Diaz’s anthem, “Narco,” became William Contreras’ home-run song, and Spencer Strider, the same rookie who called the Mets lucky after his Braves lost four out of five at Citi Field, got the decision in a 13-1 victory that wasn’t nearly as meaningful as the scoreboard suggested.

Hey, one brutal 24-hour news cycle doesn’t change four months of pure bliss, especially after Darin Ruf needed 14 pitches to get six outs in the seventh and eighth, and especially with Max Scherzer and Jacob deGrom scheduled to go against the second-place Braves on Wednesday and Thursday.

The Mets are still 34 games over .500, still 17-4 since July 23, and still 8-5 against Atlanta for the year. They are still the toast of the town and a team that has provided a sanctuary for its beleaguered customers.

The Mets fan has often been pitied and ridiculed, so the reality of being envied has to feel wonderfully disconcerting. Just take a quick look around New York, overrun by people who wish their primary teams were operating as efficiently as the Mets are operating right now.

Yankees fans are worried that what appeared to be an historic season might be coming undone.

Jets fans can’t even enjoy the early stages of a rebuild because their alleged franchise quarterback-to-be keeps hurting his knee.

Giants fans still have no clue if their alleged franchise quarterback-to-be is a worthy NFL starter as he approaches his fourth year.

Knicks fans still don’t know if Donovan Mitchell is coming, or if Jalen Brunson will help them secure their second playoff series victory in more than two decades.

Nets fans still don’t know if Kevin Durant will be head coach, GM, and part owner by opening night, or if the players he’s traded for will start yet another period of franchise dysfunction.

Meanwhile, meet the Mets. Step right up and greet the city’s best baseball team, by record, and the second-best team in the sport.

It’s an awful lot for the fan base to process, especially after Year 1 of the Steve Cohen Era felt so Wilponian at times. Somehow, some way, Year 2 has been a runaway hit on the mound, in the batter’s box, in the bullpen, in the manager’s office, in the owner’s box, you name it. The Mets got the unveiling of the Tom Seaver statue right. They got the combined Fab Five no-hitter right. They got the high-priced cutting of Robinson Cano right. They got Keith Hernandez’s number-retirement ceremony right. They got the packaging of Diaz’s entrance song so right, right, right.

Cohen even has a bigger payroll than the Steinbrenner Yankees’, not something Mets fans are accustomed to seeing. The Post’s Mike Puma recently reported that keeping this team together next season could cost Cohen at least $345 million. More amazing than that figure is the fact that Mets fans believe they now have an owner who might consider paying it.

“I couldn’t ask for better support than Steve’s given us,” Buck Showalter said after the owner ate about $40 million on Cano. “He’s been a rock for us. … Everything with Steve has been about baseball, and about what’s best for the team and the fans and the organization. … He’s eliminated a lot of excuses.”

So have the manager, Showalter, and the GM, Billy Eppler, who built a roster of pro’s pros who understand the value of team chemistry across a 162-game grind. This team, Showalter had earlier told The Post, “might be the best group I’ve ever had.” It will definitely be the best group he’s ever had if the Mets advance to the World Series, a stage Showalter hasn’t reached in his distinguished career.

Of course, there is no guarantee that’s going to happen. The Guillorme and Carrasco injuries are cruel reminders of how quickly things can change in sports. “It’s part of baseball,” said Showalter, who fully understands why nobody ever feels sorry about your troubles.

Maybe the Mets will soon run into the kind of dry spell that the Yanks ran into after the All-Star break. Maybe they will struggle to hold off the defending champs. The Braves’ five-inning winner, Strider, had told the Atlanta Journal-Constitution in Queens that the Mets are “having a lot of luck right now offensively” and that both teams will “see what things are like in October.”

Strider might have something of a point. Showalter has done his best work. Eppler’s trade-deadline acquisitions — widely considered underwhelming at the time — have made significant contributions. Scherzer, deGrom, and Diaz form a terrifying trio. Pete Alonso is having a monster year in Aaron Judge’s shadow, and Francisco Lindor is showing why Cohen paid him the big bucks. The Mets are on such a dream run, it seems like it can’t go on forever.

But it’s just not fair to read too much into Monday night’s misery, and to tell Mets fans that all of this fun is bound to end. Let them enjoy their time in the sun at last.