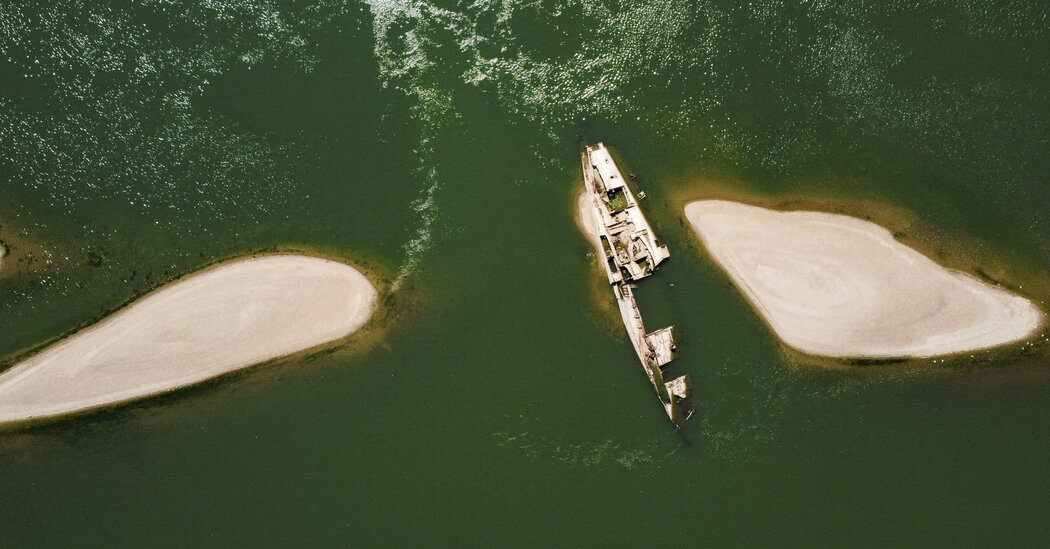 BERLIN — From the depths of the mighty Danube River, the hulking wrecks of more than a dozen German World War II ships have risen once again, exposed by a drought that has starved Europe’s rivers and led to some of the lowest water levels of the past century.

The exposed wrecks had been on the river’s bottom for nearly eight decades and emerge only when the water level is extremely low. An extraordinarily hot and dry summer rippling across Europe has dropped water levels precipitously, creating a hazard for local river transport and fishing on the Danube.

Broadly, the scorching weather has caused alarm across the continent as heat waves have increased at a faster rate, with scientists pointing to global warming and other factors as playing major roles.

The extreme temperatures have led to lower harvests and strained Europe’s ability to create its own energy supply. They have reduced hydropower in Norway and threatened nuclear reactors in France. Britain banned the use of outdoor hoses after England experienced its driest July since 1935. In Spain, towns in Andalusia have restricted water usage. In Germany, environmentalists are concerned that dried up lakes and rivers in the center of the country threaten the survival of fish and other wildlife.

The drought has also brought sustained scrutiny to relics dating back thousands of years that sometimes surface as water levels drop in rivers across Europe.

The foundations of a 2,000-year-old bridge in Rome emerged in the Tiber this summer. In Spain, the Dolmen of Guadalperal, a four- to five-millennium-old megalithic monument often compared to Stonehenge, rose from the waters west of Madrid. Earlier, a village in Spain, which had been abandoned and submerged when artificial reservoirs were built in the 1960s, became visible after years under water.

And in July, fishermen found a 450-kilogram bomb in the Po River in Italy.

The German ships exposed in the Danube — Europe’s second-longest river — had been part of Nazi Germany’s Black Sea fleet. They were sunk by the retreating German Navy in 1944 to prevent them from falling into the hands of the advancing Soviet Army.

The wrecks contain nearly 10,000 pieces of unexploded ordnance according to the Serbian authorities, which put the cost of removing the vessels and munition at nearly $30 million.

“The German flotilla has left behind a big ecological disaster that threatens us, people of Prahovo,” Velimir Trajilovic, 74, a local retiree who wrote a book about the German ships, told Reuters.

So-called hunger stones have also resurfaced as rivers have run low. The stones carry engravings from years past when water levels dropped, and the local populations knew the harvest would be bad and the ensuing year tough.

One widely reported example appeared again in the Elbe River close to the town of Děčín in the Czech Republic (it temporarily emerged in 2018).

The inscription, which appears to have been engraved in 1616, reads: “If you see me, weep.”