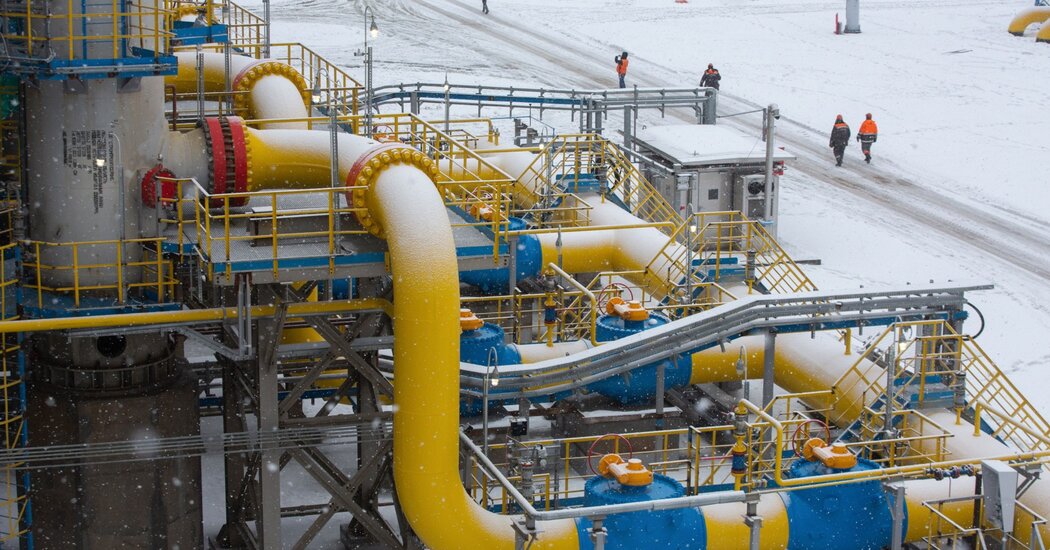 BERLIN — Not long after Russian forces invaded Ukraine, another mobilization began. European energy ministers and diplomats started jetting across the world and inking energy deals — racing to prepare for a rough winter should Russia choose to cut off its cheap gas in retaliation for Western sanctions.

Since then, President Vladimir V. Putin of Russia has fiddled with the gas tap to Europe repeatedly. Through Gazprom, the Kremlin-controlled gas monopoly, Russia has vastly reduced supplies or suspended them for days at a time — until last week, when it announced that it would indefinitely halt flows through the Nord Stream 1 pipeline that supplies Germany, and through it, much of Europe.

Yet when the blow finally came, it provoked more ridicule than outrage among European leaders, who say that by now they would expect nothing less from Mr. Putin and that they have accepted that the era of cheap Russian gas is over, unimaginable as that might have seemed just months ago.

In some corners, even as Europe’s leaders scramble to blunt the blow from lower gas supplies and higher prices, there is a growing sense that perhaps Russia’s weaponizing of gas exports is a strategy of diminishing returns — and that Mr. Putin may have overplayed his hand.

“It would have been surprising the other way around,” Robert Habeck, Germany’s economy minister, said this week of Russia’s announcement that Nord Stream 1 would remain shut. “The only thing from Russia that is reliable is the lies.”

Even the markets seemed to take the latest disruption in stride. After rising 5 percent on the heels of Gazprom’s announcement, prices are now lower than they were at the start of last week.

That does not mean that European nations are not feeling the pain, or have skirted the risk that the energy crunch could sow social unrest, fracturing their unity against the Kremlin this winter. But a lot of the damage has already been done, with gas prices several times above anything that would be considered normal and pressure mounting on consumers and businesses.

The question remains, then, of just how successful the hard pivot from Russian energy actually is — whether Europe has lined up enough new sources, whether its stockpiles can get it through the winter, whether conservation efforts can make a difference and whether governments can help shield consumers from rising prices.

Russian officials are watching and waiting for what they believe is the inevitable collapse of European resolve as the economic pain bites.

“I think that the coming winter will show how real their belief is in the possibility of refusing Russian gas,” the Russian energy minister, Nikolai Shulginov, said in an interview with the Russian state-run news agency Tass. “This will be a completely new life for the Europeans. I think that, most likely, they will not be able to refuse.”

Russian state news outlets are full of reports of protests in Europe. Italians, Russian state media reported, are being told to boil their pasta for just two minutes before turning off the heat, while Germans are forgoing showers.

The message: Sooner or later, the Europeans’ unity against Russia will crumble under the weight of high gas prices, while Russia’s standing has been elevated.

“We have not lost anything and will not lose anything,” Mr. Putin said on Wednesday.

But increasingly, Europe’s leaders are signaling that, having spent months preparing for this moment, they are ready for the showdown.

“Now our work is paying off!” the European Commission president, Ursula von der Leyen, said on Wednesday in Brussels. “At the beginning of the war, Russia’s pipeline gas was 40 percent of all imported gas. Today it is now down to only 9 percent of our gas imports.”

That is because European leaders — especially those from Italy and Germany, which rely most on Russian energy — have crisscrossed the globe. From Algeria to Qatar, Senegal, Congo and Canada, they have been negotiating deals to replace Russian supplies.

Germany has also leaned heavily on Norway and the Netherlands, which agreed to extend the life of its biggest gas field to combat the energy crisis.

As a result, Germany’s dependency on cheap Russian gas — once more than half its overall gas imports — decreased to less than 10 percent in August.

In Italy, consumption from Moscow has dropped to 23 percent from 40 percent.

Chancellor Olaf Scholz of Germany and other European leaders are defiantly claiming the end of an era.

For decades, dating to the days of the Soviet Union, Moscow had insisted to Germany and others that it was a reliable energy partner, no matter the political context. But now, European leaders say, Mr. Putin has shattered that understanding.

“Something that held true throughout the Cold War no longer applies,” Mr. Scholz said last weekend. “Russia is no longer a reliable energy supplier. That is part of the new reality.”

That new reality, perhaps, should not have come as such a shock. Mr. Putin’s gas brinkmanship dates to 2004, when Gazprom cut deliveries to Belarus, in a battle for control of a transit pipeline into Western Europe.

In 2009, as Ukraine sought NATO membership under a pro-Western president, Mr. Putin ordered a sharp reduction in gas flows through the country; after Ukraine elected a pro-Russian president a year later, the Kremlin rewarded him with a 30 percent cut in natural gas prices.

And even before Russia invaded Ukraine, it reduced exports in the summer of 2021, and did not refill Gazprom-owned storage sites in Europe.

Sergey Vakulenko, an analyst in Bonn, Germany, who worked for years in Russia’s energy industry, said that over the last two decades Russian officials had seen the geopolitical power that the United States derived from its influence over the global financial system, and sought to harness Russia’s status as a major energy exporter in a similar way.

“There was a great desire, as a superpower, to have something similar,” he said. “There was the feeling that oil and gas was the answer.”

Yet Russia’s cuts in gas exports to Europe since its invasion of Ukraine are of a different order of magnitude. “This is now just blackmail,” said Mikhail Krutikhin, a Russian energy analyst. “We haven’t seen it on this scale before.”

In going so far, Mr. Putin has also invited greater risks. An internal Russian government economic forecast described this week by Bloomberg News estimated that a full cutoff of gas to Europe would cost as much as $6.6 billion in lost tax revenues.

But with Gazprom netting a record profit of $41.75 billion in the first half of the year — $10 billion of which it passed on to the Kremlin — that is a cost Mr. Putin has calculated to be acceptable.

For Russia, oil is the biggest revenue source, and Mr. Putin may be keen to use gas as a political weapon while he can, said Thomas O’Donnell, an energy expert at the Hertie School, a public policy school in Berlin.

“This is where he’s got his biggest leverage to cause the most trouble in the European Union,” Mr. O’Donnell said. He added, “It’s a lever that he knows he’s going to lose in a year — or even maybe after this winter.”

And a lot may depend on the severity of the winter.

Even if liquid natural gas imports to Europe from other sources continue at their record high rate, a study released this week by the research institute Bruegel estimated that a complete stop to Russian supplies would require all of Europe to cut its consumption by 15 percent.

European nations that used to rely on Russian gas imports for big chunks of their domestic energy production have been racing to fill gas storage facilities. Germany’s are now at 86 percent capacity, Italy’s at almost 84 percent.

In Germany, large industry players have so far managed to drop their consumption by around 20 percent. A similar amount would have to be shaved off household usage, according to German energy and economy ministry models, should Russian gas remain shut off. If households don’t cut back, Germany’s gas regulator has repeatedly warned, the option could be rationing.

Europe is aiming to have enough liquid natural gas solutions in place by next year. Germany recently signed a deal for a fifth floating L.N.G. terminal, while terminals in Belgium, France and the Netherlands are fully booked.

The key to surviving this winter in the face of a Nord Stream shutdown will be how well European states work together.

So far, only Hungary has signed a deal for additional supplies with Gazprom.

France and Germany, in contrast, agreed this week that Paris would send any excess gas to Germany, where it is badly needed, and in return Berlin promised to send its extra electricity.

The tricky issue will be what happens should more critical German industry have to cut back, and voters begin to insist supplies not be diverted to neighbors — like the Czech Republic, where 70,000 people already came out in protest of soaring prices. It is a challenge many European leaders may face this winter, warned Annalena Baerbock, Germany’s foreign minister.

“That will be the central question that will really put us to the test in the coming months,” Ms. Baerbock said, at a meeting of German ambassadors in Berlin this week. “Will we be able to secure our energy supply for all people in Europe together in solidarity, or not?”