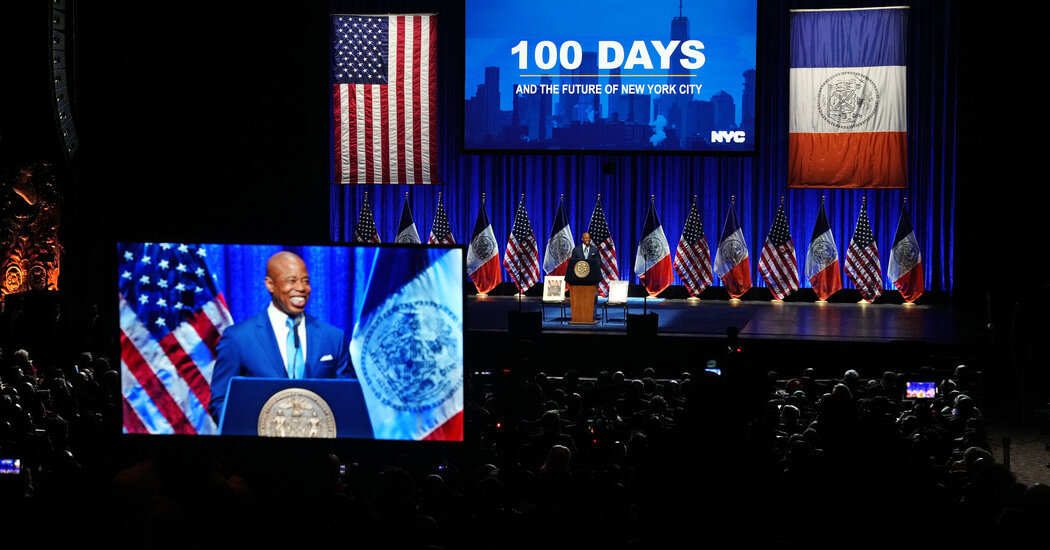 In his first months in office, Mayor Eric Adams has been confronted with a wealth of obstacles to New York City’s recovery.

Violent crime has risen, highlighted by a mass shooting on the subway this month. Coronavirus cases have been on a recent upswing, and the city’s unemployment rate remains higher than the national average.

In his first State of the City address, Mr. Adams acknowledged the immense challenges the city is facing after two years of disruption and devastation from the pandemic, saying on Tuesday that New York was “still in a time of profound concern.”

But seeking to mark a new chapter in New York City’s recovery, the mayor outlined a hopeful vision for its future, arguing that he would jump-start the city’s comeback by deepening his focus on public safety and inequality.

The mayor, a former police captain, pledged to invest more money to tackle what he said were the root causes of crime: guns, mental illness and homelessness. He proposed increasing the police budget by roughly $200 million to nearly $5.6 billion to pay for overtime and new anti-gun police teams.

“We cannot have a city where people are afraid to walk the streets, ride the subway or send their children to school,” he said.

Mr. Adams highlighted several spending priorities as part of his latest $99.7 billion budget proposal, including an additional $5 billion for housing over 10 years and $55 million to expand a program that sends emergency medical technicians and mental health professionals to certain 911 calls, rather than the police.

Mr. Adams also said that he would soon release a plan to expand child care that would allow some families earning $55,000 a year to pay only $10 per week.

The mayor had previewed other plans in recent days to spend an additional $171 million for homeless services to create 1,400 specialized shelter beds and more than $900 million over five years to make city streets safer.

“Despite the fear, the trauma, the uncertainty, and the heartbreak, we kept going,” Mr. Adams said to a crowd of hundreds of supporters at the gilded Kings Theater in Brooklyn. “Because every New Yorker knew in their hearts that our city would come back. It’s already happening. I can feel it everywhere I go.”

Mr. Adams has remained upbeat and said that he was inspired by President Franklin Delano Roosevelt who faced a “cascade of crises not unlike what we are experiencing today” after the Great Depression.

“F.D.R. understood that the people needed an honest reckoning of the problems and bold plans to solve them,” he said. “That is what I intend to deliver for my fellow New Yorkers.”

Mr. Adams, the former Brooklyn borough president, had planned to hold his inauguration ceremony at the Kings Theater in January, but he canceled it over safety concerns during a surge in coronavirus cases. Mr. Adams chose the theater, a lavishly restored cultural icon in Brooklyn, as a tribute to the borough that fueled his rise in politics.

In February, Mr. Adams released his preliminary budget and pledged to cut spending at most city agencies by 3 percent. He had proposed keeping the police budget flat and called for reducing the municipal work force, which rose to a record high under his predecessor, Bill de Blasio. Now he wants to add roughly 3,000 positions.

The mayor’s executive budget, released Tuesday, grew by roughly $1.2 billion from his previous proposal. The mayor and the City Council are required to reach a final budget agreement before July 1.

Leaders in the City Council criticized the mayor’s earlier proposal, arguing that it did not spend enough to help the city’s most vulnerable residents. The Council speaker, Adrienne Adams, and others called for the city to spend more on youth programs and mental health services and for $4 billion to be spent annually on affordable and supportive housing over five years.

Ms. Adams said on Tuesday in a statement that the new budget took “real steps” to address their concerns, but she indicated that the Council would “continue its efforts to secure additional investments in essential areas that require more support to advance our city.”

“The executive budget takes some positive steps but focuses on spending more, nearly to the exclusion of the savings, restructuring and efficiency needed to shore up the city’s fiscal house,” he said.

Mr. de Blasio gave his final State of the City speech virtually last year and pledged “a recovery for all of us” that focused on vaccinating millions of New Yorkers. Virus cases have risen again in the city recently, and Mr. Adams tested positive for the virus on April 10.

But Mr. Adams only gave a brief mention of the city’s vaccination efforts on Tuesday and did not talk about booster shots. More than 87 percent of adults in the city are fully vaccinated, but only about 45 percent have received an additional booster shot. Vaccination and booster rates are lower for children ages 5 to 17.

The budget rewards one of Mr. Adams’s closest union allies, the Correction Officers’ Benevolent Association. Amid the chaos and violence at Rikers Island, the union asked the city to hire 3,000 additional corrections officers in April, even though there is no staffing shortage there.

In his executive budget, the mayor partially acquiesced, including funding for 578 additional officers. Mr. Adams said they were needed to staff new housing areas at jails.

The mayor’s housing proposal did not meet the funding levels that the City Council and advocates had pushed for. Rachel Fee, executive director of the New York Housing Conference, urged the city to spend $2 billion more each year on housing.

“The Adams administration’s modest capital increase for housing merely treads water and will not make a meaningful dent in this emergency,” she said.

The mental health teams that respond to 911 calls are known as the Behavioral Health Emergency Assistance Response Division, or B-HEARD. The mayor wants to use additional funding to expand the pilot program to central Brooklyn, eastern Queens and the South Bronx.

“Not every emergency call needs a police response,” the mayor said.

But Mr. Adams also voiced strong support for the Police Department on Tuesday and criticized Democrats who he claimed have said “we don’t need our police” — part of his recent criticism of the “defund the police” movement.

“Let me tell you right here and right now: I will support my police, and we will make our city a safe city,” he said to cheers from the crowd.