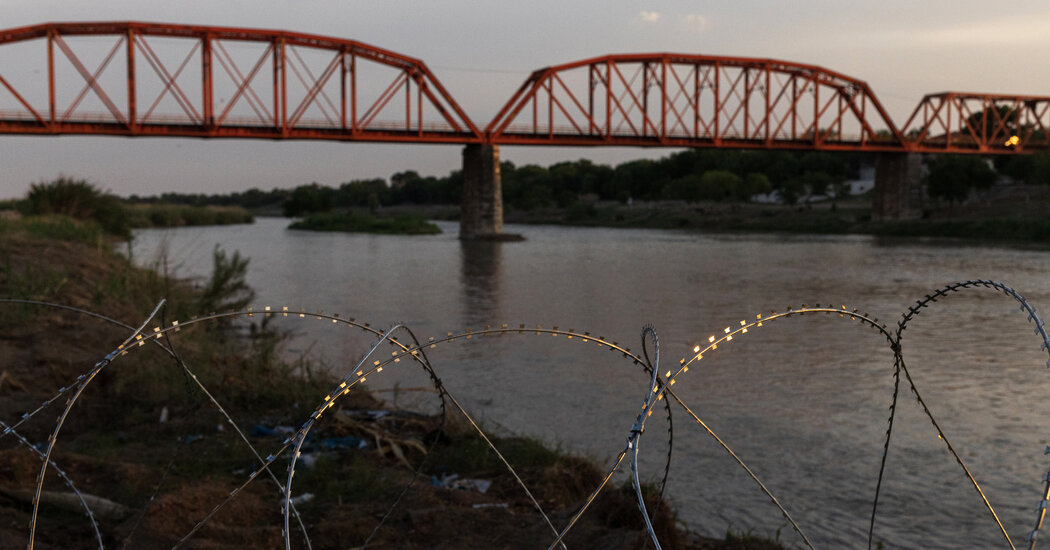 AUSTIN, Texas — Eight migrants drowned and 37 others were rescued as they tried to cross the raging waters of the Rio Grande to reach the United States, administration officials said on Friday.

The migrants were among scores of people crossing the river near Eagle Pass, a town in southern Texas that has become a major entry point for migrants in the last year.

After heavy rains, the Rio Grande is several feet higher than normal, and law enforcement officials have reported making a number of rescues, including some over the last weekend as migrants struggling to keep their heads above water were being dragged by turbulent currents.

Rick Pauza, spokesman for the Customs and Border Protection office in Laredo, Texas, said in a statement that the authorities were continuing with the aid of the local fire department and sheriff’s office to search for possible survivors.

In addition to the eight migrants who died, 37 others were rescued, the statement said, among a total of 53 migrants taken into custody by the U.S. authorities at the scene. The Mexican authorities apprehended an additional 39 migrants who were part of the group.

The fire chief in Eagle Pass, Manuel Mello, said fierce currents had swept a number of migrants downstream as they attempted to cross about a mile south of the international bridge.

Drownings have become an everyday occurrence in that section of the border, typically as many as one a day, and sometimes more, said the chief, a 58-year-old Eagle Pass native.

About two months ago, he said, 12 bodies were recovered on the same day — six by the Mexican authorities and six by U.S. rescue officials — after another large group tried to cross into the United States.

More recently, two boys, one 3 years old and the other 3 months old, slipped from the grasp of an uncle as they were attempting to cross, he said. The older boy drowned, and the infant was rushed to a San Antonio hospital in critical condition.

In Thursday’s tragedy, Chief Mello said, his firefighters used a swift-water rescue boat to recover the body of a young man in his 20s, clad only in underwear, while Border Patrol agents recovered the bodies of three other men found amid cane and brush on the edge of the Texas side of the river.

Once a quiet stretch of the border, the Del Rio Border Patrol sector, which includes Eagle Pass, has become one of the busiest crossing points into Texas for migrants.

Since the start of the 2022 fiscal year, agents have intercepted 376,000 migrants there, twice as many as during the same period last year. In July alone, border agents encountered 50,000 migrants in the Del Rio area, the equivalent of the number that would typically cross over a two- to three-year period.

Fatalities during migrant border crossings are common, but they have been on the rise as tightened U.S. border restrictions, exacerbated by a pandemic-related public health rule, have encouraged more desperate people to take risks.

In July, 53 migrants died in the back of a suffocating tractor-trailer that had no functioning air-conditioning, the deadliest smuggling event in the country to date.

The number of fatalities typically climbs in the summer months as migrants brave triple-digit temperatures during desert crossings in Arizona and heavy rain causes water levels to rise in the Rio Grande.

The Eagle Pass area has become the principal entry point for Venezuelans, who have been arriving illegally in the United States in record numbers in the last year, fleeing economic and political turmoil in their country. The Border Patrol encountered 110,467 Venezuelans along the southern border in the first nine months of this fiscal year, compared with 47,408 in the entire 2021 fiscal year.

More than 14,000 Venezuelans were apprehended after crossing the river in the Del Rio sector in July. About 10,000 Cubans were also taken into custody, another group that has been arriving in ever-larger numbers amid economic hardship and a crackdown on political dissent.

In September 2021, 13,000 migrants, mostly Haitians, entered the United States without permission in Del Rio, setting off a humanitarian crisis as authorities struggled to process them.

Since March 2020, agents have used a public-health emergency authority, Title 42, to expel hundreds of thousands of migrants back to Mexico. But those from far-flung countries — Asians, Africans and South Americans, most of them Venezuelans — are not accepted by Mexico. They are processed by U.S. border officials and released into the country with orders to appear in court for deportation proceedings. They now represent about four of every 10 crossers.

During the first 10 months of fiscal year 2022, Border Patrol agents along the southern border made more than 1.8 million apprehensions, and the number for the year ending Sept. 30 is expected to surpass two million, a record high, even though unauthorized crossings have declined in the recent hot summer months.