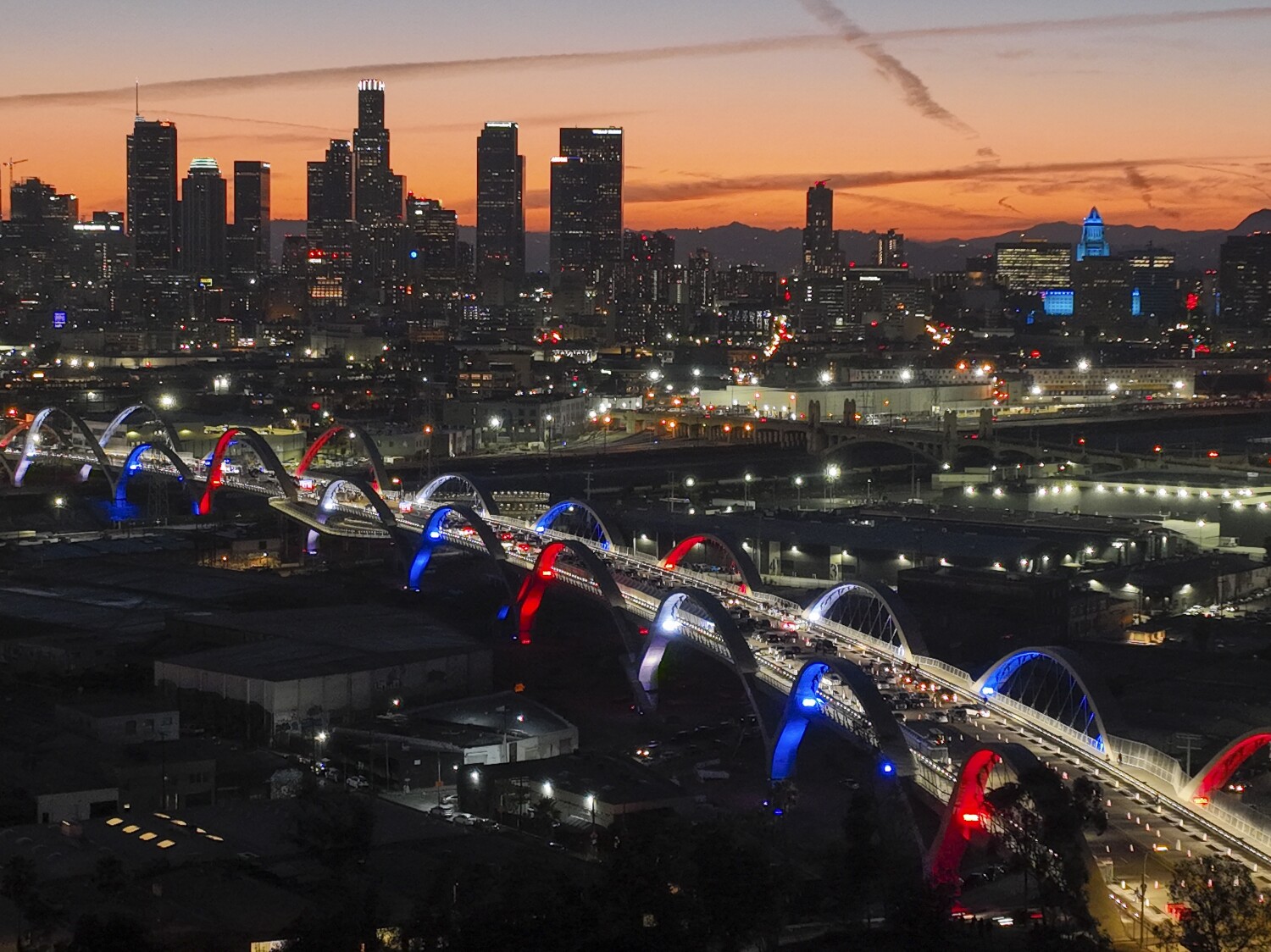 The new 6th Street Viaduct crosses more industry than water, spanning a scruffy flat of lofts, warehouses and rail lines. It does not soar over the East River or gild the windswept entrance to San Francisco Bay.

But the $588-million bridge that opens this weekend is designed as a Los Angeles monument in its own right, an iconic space to gather and to celebrate the city.

With its 10 pairs of tilted arches, it is the largest and most expensive bridge the city has ever erected, connecting downtown to Whittier Boulevard, the heart of the historic Eastside, and replacing a beloved Depression-era bridge that was demolished in 2016 because it was falling apart.

“It’s our generation’s love letter to the city,” Mayor Eric Garcetti said, standing on the bridge Friday morning, gray like the marine layer that hung over downtown’s skyscrapers.

While the Golden Gate Bridge and the Brooklyn Bridge are landmark expressions of their cities, the subtle beauty of the Art Deco bridges spanning the Los Angeles River has always attracted more local niche attention. They are widely used in props for Hollywood films, photo shoots and car commercials, as is the concrete L.A. River channel they cross. The badly deteriorating former 6th Street Viaduct made memorable appearances in “Grease,” “Terminator 2″ and “Repo Man” but never symbolized the city in the same way as the Hollywood sign, the Coliseum or City Hall.

“This will be in many ways what everybody sees in 2028 when they come to the Olympics,” Garcetti said. “I am sure it will be part of the torch relay when the Olympics come. We should put everything on here.”

The construction took six years, stalled by the pandemic and unforeseen soil conditions. But unlike most bridges built mostly to sustain the weight of big rigs barreling down them, the new bridge is meant to hold massive celebrations.

Engineers tailored its capacity for tens of thousands of people, not just cars and trucks. And its thousands of LED lights, tucked into the arches and under the beams, can turn the gray viaduct to Dodger Blue or any other color of the rainbow the occasion calls for. Officials have dubbed the new bridge the “Ribbon of Light.”

“It’s very rare that you configure a bridge so that it can be shut down and carry pedestrians,” said Michael Jones, a principal engineer at HNTB Corp. and the bridge’s chief project manager. “Most bridges aren’t designed for celebrations or special occasions. But the city hopes to use it for just that. For example, closing it down when the Rams win the Super Bowl again.”

The 3,500-foot-long bridge was designed by architect Michael Maltzan, who focused on creating “something that could knit the city together in a more consequential way.” The design was selected by the Bureau of Engineering through an international contest.

Some bicycling advocates like Michael Schneider, founder of the mobility advocacy group Streets For All, were disappointed with the final design. Bike lanes, he said, don’t have as many protections as the pedestrian walkway, which is shielded by a low concrete wall.

“I think it says a lot about Los Angeles that we spend over half a billion dollars on a bridge and people using bikes are an aferthought,” Schneider said. “The bike lane is protected by flimsy plastic bollards with these low rubber stoppers. Those aren’t designed to stop a car. They’re actually designed to minimize damage if a car touches it, and a cyclist could get killed.”

Others worry that the bridge will usher more gentrification into Boyle Heights, a predominantly Latino neighborhood where many working-class residents fear being displaced as more affluent newcomers push up rents and property values.

On an aesthetic note, walking the bridge and taking in the view captures so much of what makes Los Angeles. The freeways and skyscrapers, fancy lofts and rusting warehouses, jails, art, graffiti, palm trees and homeless camps, the mountains and the sea breeze, the grit and beauty of the city in one big sweep.

“The Hollywood sign has been the iconic symbol for Los Angeles along with Griffith Observatory, but there’s a new star in town,” said City Councilman Kevin de León, who represents the working-class Latino neighborhoods on the Eastside and the Arts District downtown. “It’s the 6th Street bridge and it symbolizes much more than the Hollywood elite. It symbolizes the working people of Los Angeles that are the backbone of this economy.”

The bridge, which was more than $100 million over budget and delayed by two years, replaced the 6th Street Viaduct. Built in 1932, the moderne bridge suffered from what engineers called “concrete cancer,” continually disintegrating due to a chemical reaction, and had to be replaced.

For conservationists, it was a painful loss, one of the most graceful of 12 spans built to cross the river as the once remote West Coast city was becoming a metropolis. Designed by city engineer Merrill Butler, the 6th Street Viaduct was the last and longest of its kind, called the “grandest of the monumental river bridges” by the Los Angeles Conservancy.

“The beauty and the function of our bridges are often forgotten,” said William Deverell, director of the Huntington-USC Institute on California and the West. “People often look past them, even when they drive them.”

But he has hopes the new span will live up to this weekend’s hype.

“You can’t really plan iconic status, it just has to happen,” he said. “But if you can energize a public space, gathering on a bridge — spanning the L.A. River — that can have all manner of cultural celebrations and gatherings, I think that could be absolutely iconic and extremely important.”

The six years of construction was a massive undertaking, with 89 subcontractors, 8,250 tons of steel and 15,000 feet of steel cable. The pandemic delayed some construction and supply-chain disruptions shot up costs. Even as it opens over the weekend, the railings on the stairs leading up and down the viaduct have yet to be delivered because of shipping delays and labor shortages.

“It’s beautiful,” said Rafael German, 24, who sauntered out onto the viaduct on Friday. “We have the best view of all of downtown, right here.”

He was born in Tijuana and grew up in Boyle Heights, and he can see the bridge from the home he shares there with his wife and 2-year-old. In high school he trained for basketball by running down Cesar Chavez Avenue to Union Station and then heading east, cutting across the old bridge toward home. He watched it being torn down in recent years, and after 12-hour days working security at a hotel, he often came after his shift to watch the new span being erected.

Underneath the bridge is a sprawling park costing $40 million that Garcetti said will be the city’s next “Central Park.” It is scheduled to open by 2024 and will feature a small amphitheater, soccer fields and walking paths.

German welcomes the changes, but like others is wary of further gentrification in Boyle Heights. New art galleries, breweries and the possible redevelopment of the 1927 Sears, Roebuck & Co. building into market-rate lofts have many worried that the character of the neighborhood is changing for a different class of resident. German’s rent has jumped $400 to $1,400 a month in the last two years.

He fears the bridge will bring the wealthier ever closer.

“I am just a little bit scared about . . . them taking over this side,” German said. “The people with money.”