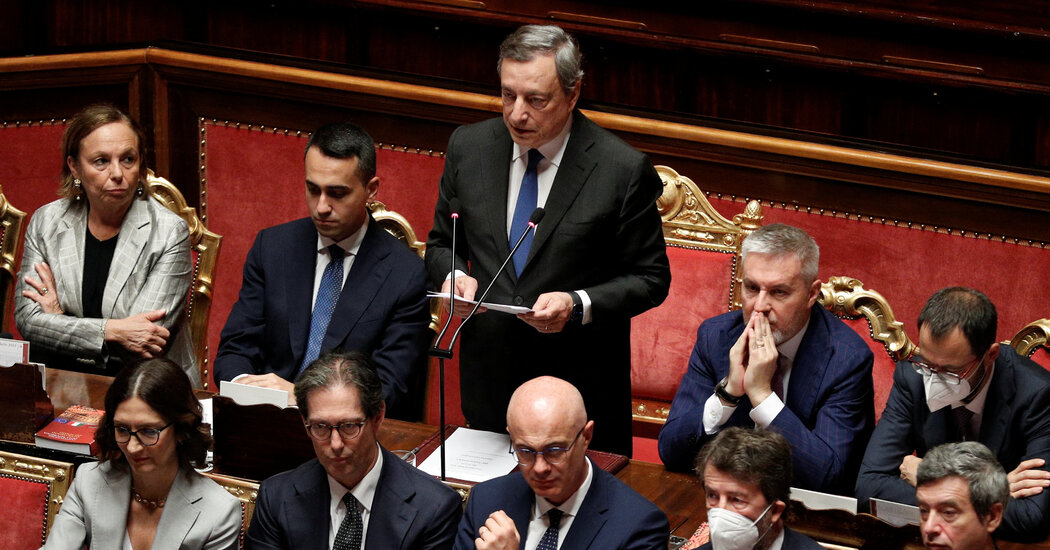 Five Star, which won 33 percent of the vote in 2018 and is, as a result, still the largest party in the government, has since cratered. It has dreaded elections for years, but as the country’s next scheduled elections approach in early 2023, the downside of early elections has decreased.

Still, the party, which has lost about two-thirds of its national support, would stand to be decimated at the ballot box. Mr. Conte’s decision to take a stand last week was widely seen as an effort to regain some of the party’s long lost anti-establishment identity. Instead, it seems to have backfired.

Mr. Draghi on Wednesday made it clear that his government would not cave in to Five Star’s demands. He held firm on military support for Ukraine, which Five Star opposes, and for the building of new gas facilities to give Italy energy independence from Russia as a matter of national security, something Five Star has also opposed.

He said that Italy’s universal income benefit for its poorest citizens, Five Star’s trademark achievement, was a positive development, but that it needed to be improved so that it actually helped those who needed it and did not become an incentive not to work. For now, it is loathed by the business sector and considered by many to be a drag on employment.

That hard line was met by heckling and disapproval from parts of the chamber.

The center-left Democratic Party, which is most supportive of Mr. Draghi, was also in a difficult position because it was counting on an alliance with Five Star, or what is left of it, to bolster its own electoral fortunes in the next elections. But now an alliance with Five Star — the party that prematurely ended the Draghi era — was itself laden with danger, and fractures had emerged in the left over its wisdom.

The right-wing coalition of the League party, led by the nationalist Matteo Salvini; Forza Italia, led by former Prime Minister Silvio Berlusconi; and the hard-right Brothers of Italy, led by Giorgia Meloni, was currently leading in polls, though it was not clear how eager they were to govern at such a delicate time.