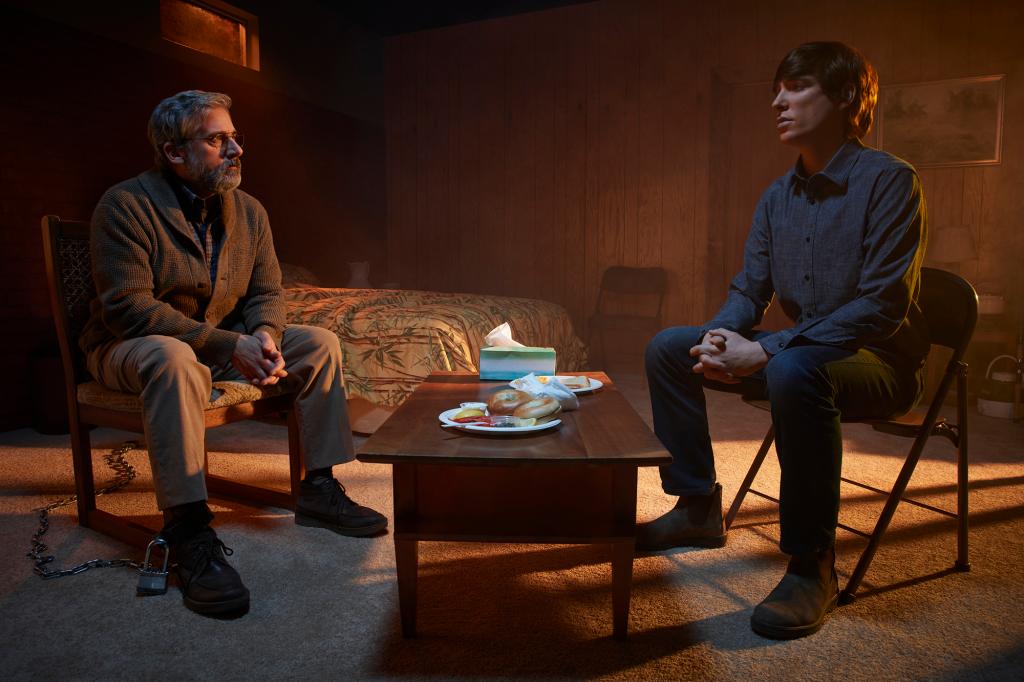 “The Patient” adds a horrific wrinkle to the patient/therapist trope that’s been spoofed and dissected in big-screen comedies (“What About Bob?,” “Analyze This”) and on television dramas (“The Sopranos,” “In Treatment”).

The 10-part FX series, premiering Aug. 30 exclusively on Hulu, revolves around Sam Fortner (Domnhall Gleeson), a patient with daddy issues, and his therapist, Dr. Alan Strauss (Steve Carell), who’s mourning the recent death of his wife and his estrangement from his grown son.

On the surface, it all seems typical enough, until Sam kidnaps Alan, chains him up in his basement, unmasks himself as the strangler known as “The John Doe Killer” — and demands that Alan cure him of his compulsions … or else.

“It’s an interesting proposition,” Gleeson, 39, told The Post. “[Series creators] Joel Fields and Joe Weisberg were into the notion of making Sam … not as relatable as possible but as normal as possible. Yet there’s this huge thing — he wants to get better, yet if he were truly empathetic there’s a quick way to deal with all of this, which is to turn himself in, and he’s not choosing to do that.

“His selfishness is at the core of what he’s doing and yet he’s trying,” he said. “I think that’s very relatable for a lot of people; everyone is selfish and most people are trying to be better people — but this is pushing that to the furthest extreme.”

That’s an understatement. Alan’s legcuff confines him to a short perimeter around the bed on which he sleeps in the roomy basement, decked out in ’70s-era decor, but it’s close enough to the chair in which he sits opposite Sam, who drinks a lot of Dunkin’ Donuts coffee during their enforced therapy sessions. The monster hidden beneath Sam’s benign facade is soon exposed, while Alan simultaneously analyzes his own faults — and his fractured family dynamic — while living the perpetual nightmare that he will be Sam’s next victim if he can’t fulfill his end of the twisted killer’s plan. Gleeson and Carell are riveting, intense and masterful in their disparate roles.

“There’s a dramatic engine all the way through with how much do you believe that Sam has done these things — it’s clear that he is what he says he is, but that’s not an aspect of him that is presented for whole episodes at a time,” said Gleeson, alluding to scenes in which Sam is seen at his job as a county health inspector and in several other outside scenarios. “You see that Sam has a temper, that he has struggles, and you see he’s messed up in lots of ways … but his lack of control, and the awfulness of what that is … that’s hidden beneath the dialogue and covered up.”

The Irish-born Gleeson (Bill Weasley in the “Harry Potter” franchise, “Star Wars: Episode IX — The Rise of Skywalker”) — he adopts an American accent for Sam — waxed enthusiastic about working with Carell.

“Steve is just exceptional. Anybody who’s seen him [in his 2015 Oscar-nominated role] in ‘Foxcatcher’ will understand the depth that he is capable of going to,” he said. “Obviously, as a comedic actor he’s stunning but as a dramatic actor he’s also extraordinary and he made it a joy. Those scenes are hard, and what you’re planning is hard, but he made it easy as possible in all the right ways. I can talk forever about him.”

This is not the first time that Gleeson has played a killer. “I was a cannibal interested in young people, and I played the worst of the worst, but it was only for a scene in a film by John Michael McDonagh [2014’s ‘Calvary’] opposite my father [Emmy-winning actor Brendan Gleeson]. There’s a trip, and my father’s performance is absolutely stunning,” he said. “I also played a hitman in a film called ‘The Kitchen,’ so I have played people who kill people.

“It’s a strange place to go in your head,” he said. “There’s the general serial killer and then there’s Sam. To me, he has an absolutely huge blindspot where he doesn’t understand that there’s an easy way out of this. It just never really occurs to him because his ego is so huge and his selfishness is so ginormous that he can’t conceive … of a way to stop other people’s suffering.

“With serial killers generally, I think, incorrectly, that there’s a mystique built up around them in the public consciousness,” he said. “They want to exercise control over other people to the ultimate extent and, in a way, that’s not fascinating, that’s just horrible.

“That’s the way they should be viewed.”