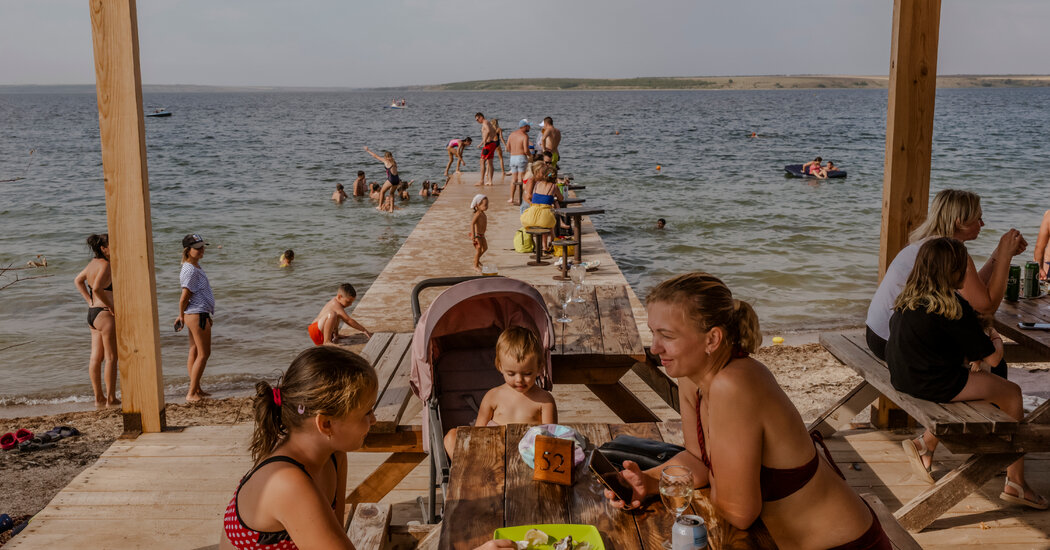 TYLIHUL ESTUARY, Ukraine — Senior Lt. Kirill Vikhrov stripped off his uniform and waded into the shallow estuary, the long rays of afternoon sunlight glinting in his blond hair.

Slowly, the 25-year-old soldier lowered his whole body into the briny water, closed his eyes and, for an instant, seemed to let himself go.

It had been nearly six months since Lieutenant Vikhrov last had a moment for himself, free of the shelling, the guns and the death that had only intensified in recent weeks along the front lines in southern Ukraine. The stresses of war have become difficult to endure.

“People are getting tired,” he said. “For some their nerves are failing. It’s constant shelling, constant tension. You can’t sleep normally. So some people are breaking.”

For a brief Sunday afternoon, though, Lieutenant Vikhrov retreated from the bloody conflict that he and his fellow troops have been locked in for months with the Russian forces entrenched in the nearby Kherson Region.

He and his girlfriend have escaped to a small, peaceful oasis about 50 miles from the front lines. The spot, along the banks of the Tylihul Estuary, has become a popular respite, where the war weary swim and sunbathe and pretend that life is normal, if only for a short while. The estuary is one of the few bodies of water along Ukraine’s Black Sea coast that isn’t mined or used for some military purpose.

It also has an attraction that might seem exotic even in quieter corners of Ukraine: oysters.

A few years ago, a Ukrainian businessman with a flair for the unconventional started an experimental oyster farm in these waters. Despite the war, the little creatures, along with the business, have thrived.

On a recent Sunday, the small outdoor cafe run by the farm was packed, many of the wooden picnic tables occupied by those seeking a break from the fighting.

There was a table of frontline medics, and a firefighter from the nearby city of Mykolaiv, where rockets rain down nearly every night. Lieutenant Vikhrov was there as well, with his girlfriend, Yulia Vasilyeva, who said the idea of eating oysters and sipping wine by the water was “like something European,” that made her feel far from the war.

“Now is not the time for tourism; now is the time for survival,” Ms. Vasilyeva said. “But something like this helps you switch off for a bit.”

Andre Pigulevsky, the owner of the farm, named The Oysters of Scythia, reopened it shortly after Lieutenant Vikhrov and his comrades repelled a Russian advance along the Black Sea coast early in the war that had threatened to swallow his business, along with a large chunk of southern Ukraine. In appreciation, he has decreed that soldiers and their families can eat all the oysters their stomachs can hold for free.

“The purpose of this place is to have a few hours rest to feel like it is peacetime,” said Mr. Pigulevsky, 40.

Since the war began, Ukrainians have surprised the world not only by their fighting prowess but also with the way they have carried on living. In cities that have been enduring withering artillery attacks, municipal workers continue to prune trees and maintain flower beds. The young throw raves at the sites of bombed-out buildings to encourage cleanup efforts. The internally displaced open florist shops in their adopted cities.

Even in the idyllic setting of the oyster farm, however, the signs of war are not completely absent.

The Ukrainian military at first resisted Mr. Pigulevsky’s desire to reopen, citing safety concerns about large gatherings of people so close to the war zone, but officials convinced them that local residents needed some place to unwind.

To put more of a buffer between his oyster farm and the fighting, Mr. Pigulevsky is moving it across the estuary to the Odesa Region side, where he has also built a small cafe and beach resort called Oysterville.

He sells one kind of oyster, a Japanese variety called Crassostrea gigas, which he buys as small spuds from suppliers in France and grows in netted sacks out in the estuary. Recently he has branched out to growing snails and bought five goats from a local family for making cheese.

On an August weekend, the beach in front of the cafe was teaming with very large men in small Speedos and small women in even tinier bikinis, all swimming, slurping oysters and sampling the local chardonnay made at a winery in nearby Odesa.

For Mr. Pigulevsky the unexpected success of his business in wartime Ukraine has put him in a bit of a bind. With Russian troops bearing down on his farm in March and April, he decided to sell about 80 percent of his oyster stocks at a loss. Now, he only has enough oysters out in the estuary to last him until the end of September.

“I was scared,” he said of the early months of the war. “I was sure they would be here any day.”

Though Ukraine has not been known in modern times for its oysters, they were once a regional delicacy. One of the first references to oysters was in the 5th century B.C. by the Greek historian Herodotus, who described them in his writings about the Scythians, whose empire encompassed much of what is today Ukraine.

Ukraine’s oysters have weathered crises before. In the early 20th century, a major earthquake changed the salinity levels in the waters off Crimea, wiping out a thriving oyster industry there, said Sergei Shevelyov, the manager of the Oysters of Scythia location on the Mykolaiv side of the estuary. After World War II, ships crisscrossing the Black Sea brought with them a predatory mollusk that again decimated the oyster population, he said.

Few of his guests had any desire to discuss calamities past or present. For most, it was the first day they had been able to relax since the war’s beginning, and even if they were allowed to go into specifics about their work, no one was inclined to.

“The satisfaction from today needs to last me a week or two or maybe a month,” said an ultrasound technician named Liliya, who asked that her last name not be published because of safety concerns. “Today is simply about relaxation.”