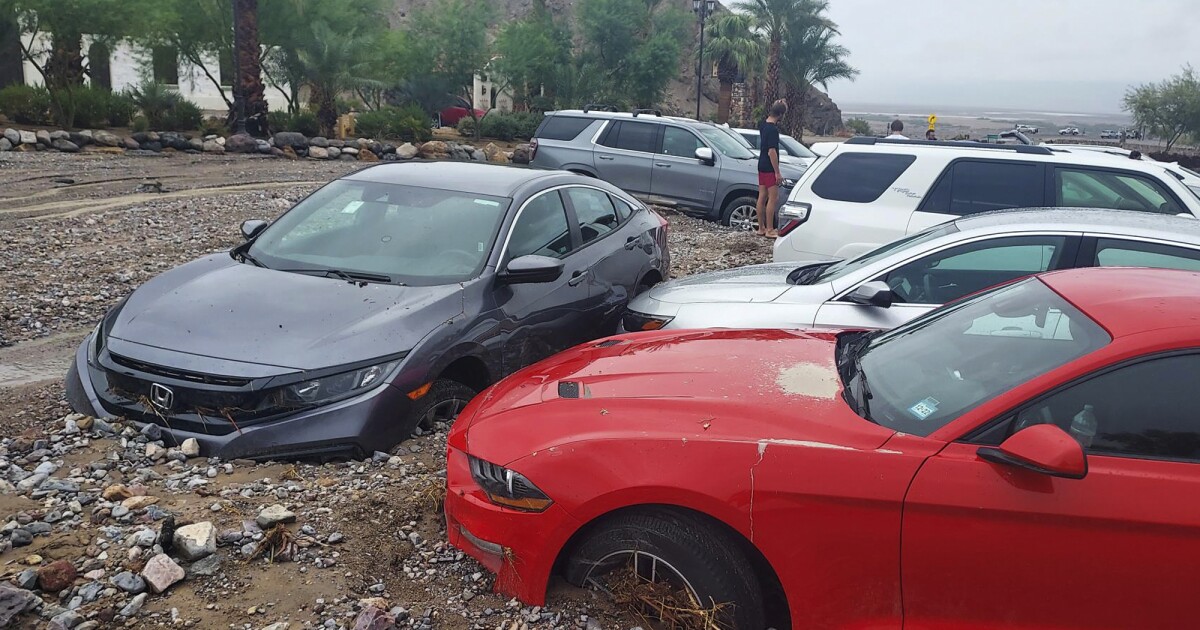 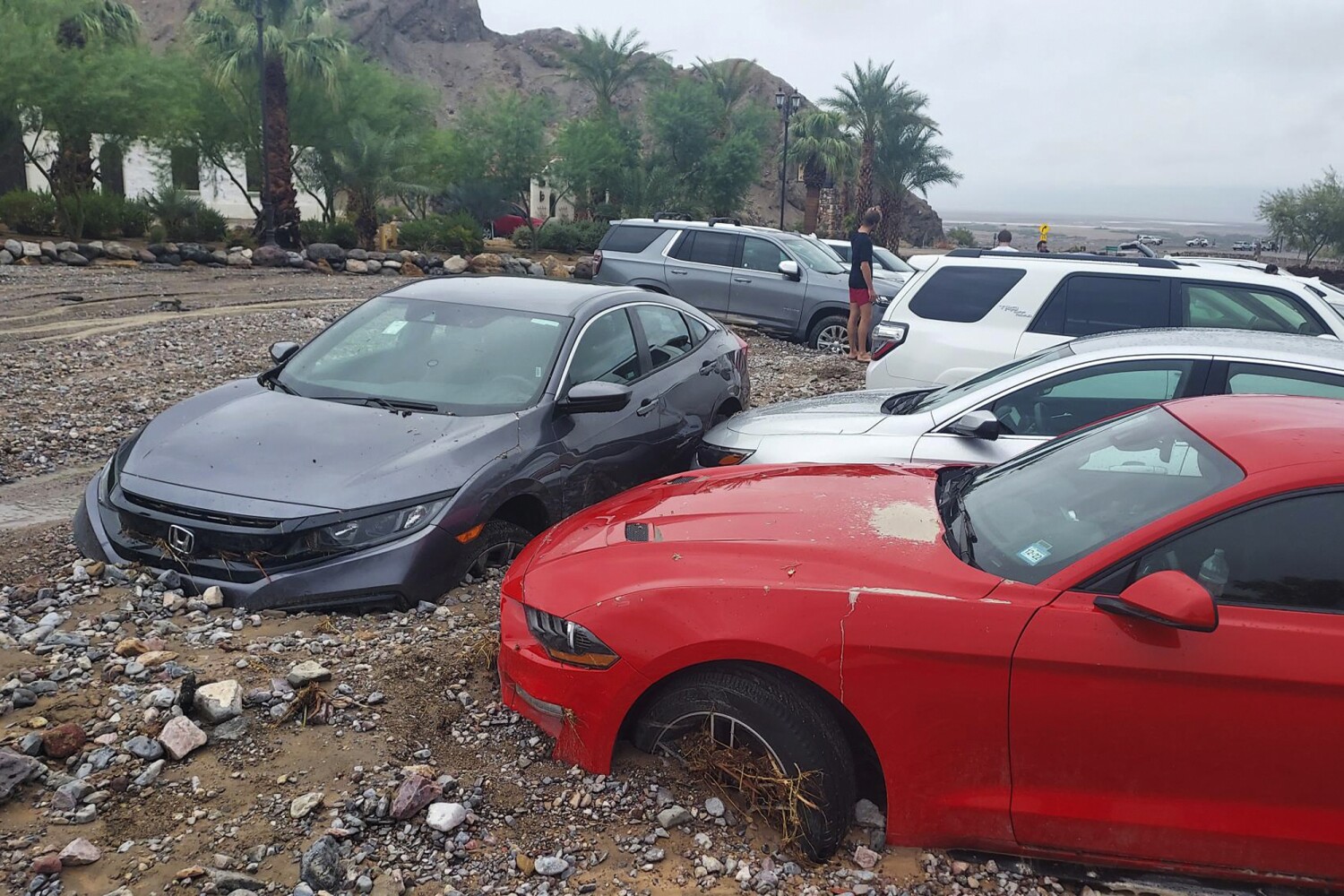 Photographer John Sirlin was in a canyon in the northeast part of Death Valley National Park late Thursday to shoot lightning in an expected thunderstorm.

Then the lightning petered out and the storm became a nonstop torrential downpour that lasted for hours, bringing near-record rainfall to one of the hottest, driest places on Earth.

“It seemed serious,” said the 46-year-old from Chandler, Ariz., who also leads storm-chasing workshops. “It was a magnitude of flooding I had not experienced before.”

More analysis will be needed to determine whether climate change helped drive the storm’s intensity. But its extreme nature is consistent with what can be expected as global temperatures rise, experts said, drawing parallels with the historic flooding that damaged Yellowstone National Park in June.

“We’re already in a climate where the odds of intense precipitation are elevated,” said climate scientist Noah Diffenbaugh, a professor and senior fellow at Stanford University. “And we have a clear understanding that as global warming continues, the heavy precipitation events are likely to continue to intensify overall.”

Rainfall totaling 1.46 inches was recorded at Furnace Creek Visitors Center on Friday, surpassing the Aug. 5 record of 1.10 inches set in 1936 but falling just short of the park’s heaviest rainfall of 1.47 inches on April 15, 1988, said Brian Planz, a meteorologist with the National Weather Service in Las Vegas.

Death Valley has averaged about 1.96 inches of precipitation per year since record keeping began in 1911, according to the Western Regional Climate Center. Nearly 75% of that amount fell in the space of a few hours on Friday.

Videos posted to social media showed roads turned to rushing rivers that uprooted trees, overturned boulders and flooded park facilities. Dumpsters careened into parked cars, and cars collided with one another, the National Park Service said. At one point, about 1,000 residents and visitors were trapped in the park due to the rising waters and debris, according to officials.

“Where it really got crazy was between 4 and 4:30,” Sirlin said. “We went from having a little bit of water running through the dips and washes, water a couple of inches deep, to suddenly you could hear the sound of rocks and boulders.”

Traveling with his corgi, Aspen, he drove to Badwater Road near Highway 190 and waited it out in his car there.

“I knew from experiencing past monsoon-type floods that stuff can get crazy in a hurry, so I made the decision to get to higher ground,” he said.

After sunrise, he began driving toward the eastern entrance to the park, stopping as he went to move boulders and branches out of the road. At times, he had to use flat rocks to build bridges over washed-out sections of the road, he said, and estimated the 35-mile trip ended up taking about six or seven hours.

“Different areas of the park flooded at different times. You could get clear of one area and another wash would be running and you would have to wait 15 minutes,” he said.

By Saturday afternoon, most visitors had been able to leave the park, said incident information specialist Jennette Jurado of the National Park Service. Law enforcement escorts helped them avoid multiple places where the pavement was undercut, with asphalt hanging over unsupported areas at risk of collapsing, she said. U.S. Navy and California Highway Patrol helicopters were conducting aerial searches to make sure there were no more stranded vehicles. No injuries had been reported, but some roads sustained extensive damage.

“You can just make a blanket statement that every roadway known in the park has debris washed over it,” Jurado said. “Sometimes the debris is light, only a couple of inches deep, and in other areas it’s feet deep.”

Summer storms in Death Valley are usually more localized, closing a road or two and maybe causing an alluvial fan to flash flood, Jurado said, calling Friday’s downpour “exceptionally rare.” The last time the park saw rain this widespread was in 2015, when a powerful weather system dropped nearly 3 inches of rain in five hours, triggering a 1,000-year flood event that battered historic structures. Scotty’s Castle, a Spanish-style mansion that offered guided tours, was severely damaged and has been closed to the public ever since.

“It seems like every time we get rain here in Death Valley, it makes the rocks move. So that itself wasn’t a surprise,” Jurado said. “But just having it be so widespread and having so much volume of rain is certainly a pretty big deal for us.” More rain fell in this one storm than during any August in recorded park history, she added.

Although the rainfall was greater than normal, such storms aren’t atypical for Death Valley at this time of year, when monsoons often bring moisture from Mexico, Planz said. He attributed the storm to a combination of monsoonal moisture and an inverted trough moving across the Southwest that provided energy.

“All the right ingredients came together,” he said.

Now that Earth has warmed 1 degree Celsius above preindustrial levels, the odds are elevated that when factors known to produce intense storms do align, their effects will be even more extreme, Diffenbaugh said.

Although it can seem counterintuitive, he said, the same dynamic — often described as the increasing thirst of the atmosphere — is also contributing to the historic drought, more intense, frequent heat waves and increasingly extreme wildfire behavior that have beset the western United States.

“While it might appear to be paradoxical that we’re getting both extreme hot and dry and extreme wet in the region simultaneously, it’s very consistent with both the baseline climate dynamics of the region and with the multiple ways in which global warming is increasing the odds of extreme events,” he said.

Friday’s storm marked the second time flash flooding hit Death Valley within a week, with some roads inundated during a storm on Sunday. Flash flooding also washed out parts of the Mojave National Preserve, with most paved roads into the park remaining closed as of Saturday. And late last month, heavy monsoonal rains saturated Las Vegas, sending water cascading into casinos.

Death Valley officials said it would take time to assess the extent of the damage over the park’s 3.4 million acres, which include 1,000 miles of roads.

The Park Service’s Emergency Operations Center building and staff residences sustained water damage, and some of them remained without water service because water lines in Cow Creek were blown out in multiple locations, according to authorities.

Highway 190, the park’s main east-west road, remained flooded in some areas and blocked by debris flows in others. About 20 palm trees had fallen into the roadway by the Inn at Furnace Creek; the highway’s shoulder was destroyed and its asphalt damaged. California Department of Transportation crews were working around the clock to restore access and hoped to be able to partly reopen the road by Tuesday.

Numerous debris flows were reported elsewhere in the park, including across Badwater Basin Road and Artists Drive. Along other roads, storm waters removed swaths of asphalt that will require filling and new pavement, Jurado said.

“With some areas that have complete pavement removal, it’s going to take some time to rebuild,” she said. “I can’t speculate on whether that’s weeks or months, but there’s definitely going to be some long-haul repairs.”