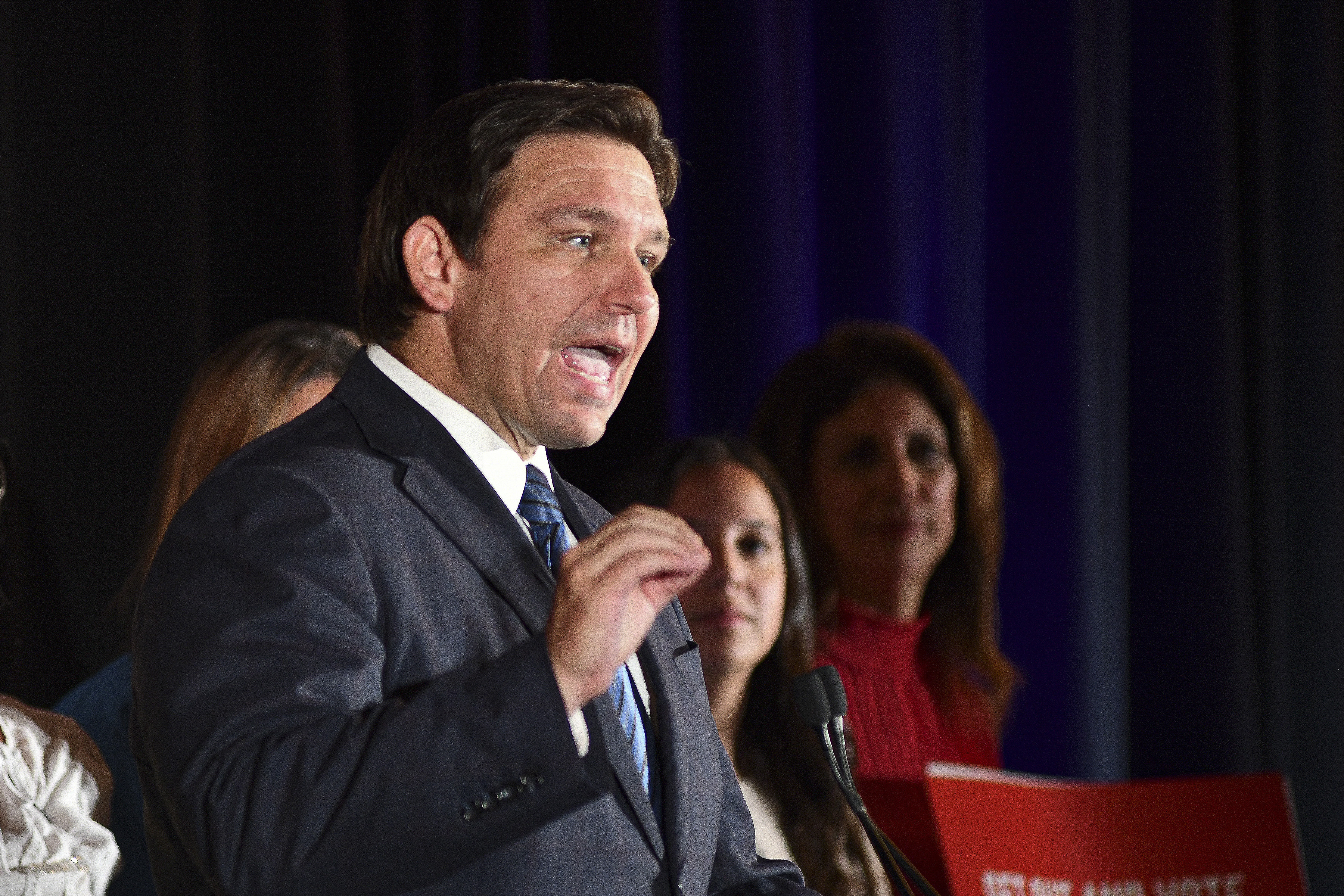 Here are five takeaways from a key primary night in Florida and New York:

New York’s ‘canary in a coal mine’

It would have been easy to write Nebraska off as a fluke, after Democrats ran better than expected in a House race there last month. But then came Minnesota, where Democrats again beat expectations. And then, in New York on Tuesday, the dam broke.

It would have been a victory for Democrats if they’d even kept it close. Instead, Democrat Pat Ryan beat Republican Marc Molinaro in a district that Joe Biden narrowly won in 2020, but that would have appeared to favor Republicans in a normal midterm climate.

Overall, on the last major primary night of the year, the winds appeared to be shifting in Democrats’ favor.

It can be tempting to read too much into special elections. They’re not always predictive of results in the fall, and Republicans this year have overperformed in some places, too. In June, the GOP won a South Texas House seat that had been held by a Democrat.

But that was before Roe shook the political landscape. Ever since, it’s been nothing but one sign after another that Democrats – while still widely expected to lose the House in November – might not be in for the all-out drubbing once predicted.

The New York race to succeed Democrat Antonio Delgado in a New York House district is likely a better indicator than the House races in Minnesota or Nebraska. For one thing, it’s the most current data we have. But more than that, it’s a competitive district where both parties spent real money and tested their general election messaging – abortion for Democrats, the economy for Republicans. It was about as close to a November test run as we’re going to get.

“This is a Republican versus a Democrat. They’re not crazy. No one’s off the wall,” said Hank Sheinkopf, a longtime Democratic strategist based in New York. “That’s why it’s a good test.”

Democrats passed and then some.

“If Pat Ryan out-and-out wins, or even comes within 5 points of beating Molinaro, all projections of a red wave are completely overblown,” said New York-based Democratic strategist Jon Reinish, a former aide to Sen. Kirsten Gillibrand. “This race is really a canary in a coal mine.”

But Trump is still rolling

In a midterm cycle dominated by Donald Trump, it was a House race in Florida on Tuesday that laid bare more clearly than anywhere just how much Republicans are willing to stomach in their service to the former president and his fiercest allies.

Not even a federal investigation into whether Rep. Matt Gaetz had sex with a 17-year-old girl and paid her for it (Gaetz has denied any wrongdoing) was enough to dent his MAGA celebrity. Not even close.

Gaetz, a Trump favorite, beat his closest opponent by more than 40 percentage points.

With the primaries all but finished now, Trump’s midterm record is not without blemishes. There was his humiliation in Georgia in May. His preferred candidates lost gubernatorial races in Idaho and Nebraska. And in New Hampshire, Trump-world failed to find any prominent Republican to run against the incumbent governor, Chris Sununu. Sununu, who called Trump “fucking crazy” at the roast-style Gridiron Club dinner this year, is likely to easily win re-nomination in his primary next month.

But for the most part – from J.D. Vance’s victory in the Ohio Senate primary in May to Rep. Liz Cheney’s ouster in Wyoming last week – the midterms belonged to the former president.

Gaetz was the icing on the cake.

“In general, probably the former president has maybe even a better win-loss record than some people would have expected,” said Mark Graul, a Republican strategist who worked on George W. Bush’s 2004 campaign.

If Trump-ism is ever going to “flush its way through” the Republican Party, he said, the lesson of this year’s primaries is that “it’s going to take more than one election cycle.”

Florida Gov. Ron DeSantis’ political muscle was on full display Tuesday night, as candidates he endorsed won a handful of key state legislative races and a wave of school board seats, which were a main focus for the governor in the final weeks of the 2022 midterm.

DeSantis’ biggest legislative win was Republican Kiyan Michael, who is running for a Jacksonville state House seat. Michael was running against more established and better funded politicians, including a former state representative.

DeSantis did not endorse until late in the race, but his support gave Michael immediate momentum to overcome her Republican rivals. She ended up securing 47 percent of the vote in a three-way primary.

DeSantis also backed Florida Senate candidate Blaise Ingoglia and Jonathan Martin, both Republicans. The impact of the governor’s endorsement was felt long before Election Day because it cleared a potentially crowded field in both races.

For the final weeks of primary season, DeSantis put an outsized effort, including contributions from his personal political committee, into local school boards across the state. It’s part of his broader agenda to reshape Florida’s education system.

It worked. Of the 30 school board candidates that got DeSantis’ formal support, 21 won their election bids Tuesday night.

Florida Republicans, with DeSantis taking the lead, have poured thousands of dollars into school board races this election cycle, elevating those generally sleepy races into top midterm targets for the GOP, and putting at times surprised Democrats on underfunded defense.

Defense contractor Cory Mills boasted that he would make the media shed “real tears” after news accounts reported on how his company sold tear gas used on Black Lives Matters demonstrators. Mills has also questioned the legitimacy of President Joe Biden’s win in 2020.

Anna Paulina Luna, who was endorsed by former President Donald Trump, alleged last year that a handful of her rivals were engaged in a conspiracy to kill her.

Both are poised to join the Republican caucus in Congress after winning their respective primaries for Florida’s 7th and Florida’s 13th congressional districts. The contests in both races were noisy, bitter and expensive.

The GOP candidates are likely to win in November because the districts were reshaped to favor Republican candidates under a controversial new congressional map championed by Gov. Ron DeSantis. Currently Republicans hold a 16-11 edge in Florida’s congressional delegation. After adding one seat due to population growth, the new map is projected to give the GOP a 20-8 margin in the next session of Congress.

The result was that Republicans vying for the new seats shifted even further to the right.

It didn’t work for all candidates. Laura Loomer, a far-right activist who has been kicked off social media platforms for anti-Islamic posts, came close to knocking off longtime GOP incumbent Rep. Dan Webster. But Webster – buoyed by votes in his home county – managed to beat her by a few thousand votes in the race for Florida’s 11th congressional district. Another candidate – Martin Hyde – said FBI agents would have wound up in a “body bag” if they had searched his home like they did Mar-a-Lago. But longtime incumbent Rep. Vern Buchanan soundly thrashed Hyde in the GOP primary for Florida’s 16th congressional district.

A Roe asterisk for Democrats in Florida

Everything we know about the overturning of Roe v. Wade is that it will likely be a major motivator for Democrats in the fall.

What abortion does not appear to be – given Nikki Fried’s wipeout in the Florida gubernatorial primary on Tuesday night – is singularly determinative.

Fried, the state agriculture commissioner – once heavily promoted as the future of the Democratic Party in the state – had spent much of the primary campaign casting her opponent, Charlie Crist, as at best untrustworthy on the issue. Crist, a former Republican governor of the state before morphing into an independent and, eventually, a Democrat, said during his U.S. Senate run in 2010 that he would advocate for “pro-life legislative efforts.”

Even days before this year’s primary, when asked if he was “pro-life,” Crist responded, “I’m for life, aren’t you?” before adding, “I’ve been pro-choice in every single decision I’ve made that affects a women’s right to choose.“

So, what’s more important to Democrats than Roe?

“I think the litmus test question in this race is who is the candidate who can best defeat DeSantis, which is a strategic question that I think most Democratic voters are applying,” said Fernand Amandi, a veteran Democratic pollster and consultant in Florida.

Crist is widely considered an extreme longshot in the general election against DeSantis, even among Democrats.

But paradoxically, while Crist needed to survive the politics of abortion to win on Tuesday, it’s that same thing that he will need to be competitive at all in November.

If not for Roe, Amandi said, “I’m not certain that the Democrat would have a chance.”