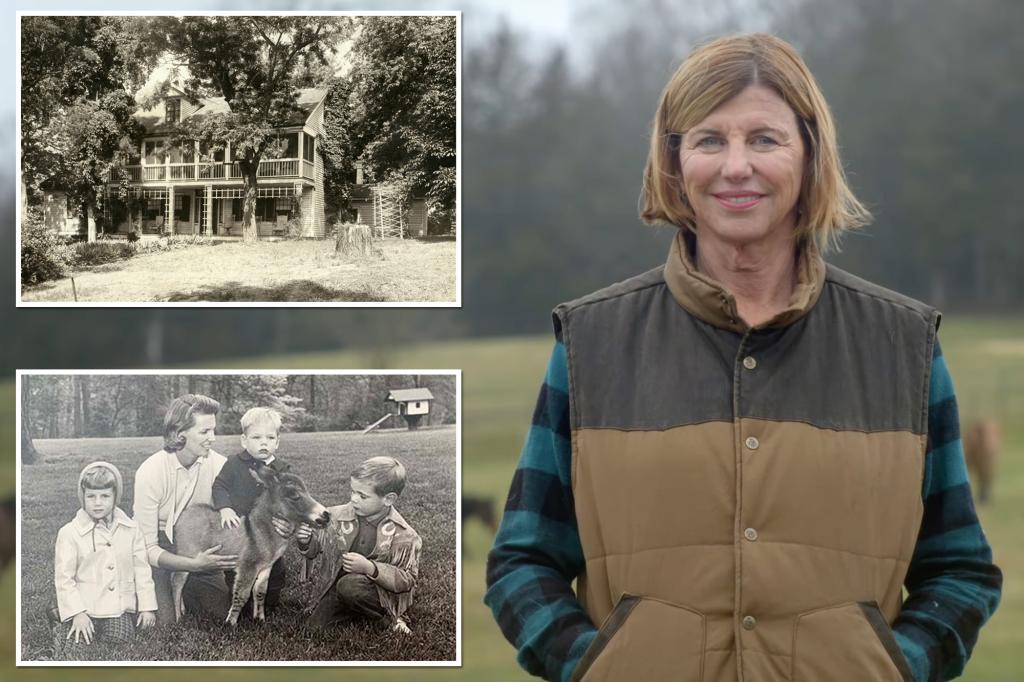 Trudy Busch Valentine, the beer heiress who’s running for US Senate, owns part of a former plantation that once housed 90 enslaved people, The Post has learned.

The Democratic primary contestant from Missouri and former whites-only beauty pageant queen featured Grant’s Farm, formerly called the White Haven plantation, in a video to launch her Senate campaign — though she doesn’t once mention its brutal history.

Instead, Busch Valentine portrays the plantation as a family “farm” run by a single mother to contrast with her image as the rich heiress of the Anheuser-Busch fortune.

“For me, it all began on the farm,” Busch Valentine says in the launch video.

On May 12, donors will shell out as much as $5,800 to wine and dine with the Senate hopeful at her “campaign kickoff reception” at Grant’s Farms — a site built on the backs of enslaved people.

Busch Valentine’s use of a former plantation in the ad could be yet another blow to her campaign’s standing among Missouri’s African American voters.

In March, it was revealed that Busch was crowned queen of a whites-only “Veiled Prophet” beauty pageant in 1977. Photos from the time showed Valentine next to the pageant’s titular “veiled prophet,” who donned a white sheet over his head similar to Ku Klux Klan garb. She returned to the pageant in 1990, and her daughter attended in 2010.

“If she’s putting her hat in the ring for the U.S. Senate, she needs to address this,” Katrina Moore, an associate professor of history who studies slavery at Saint Louis University, said of Grant’s Farm. “It says something about your character if you don’t recognize holistically what these places mean.”

Though Missouri wasn’t officially in the Confederacy, White Haven “shouldn’t be separated from the plantations of the South,” Sarah Fling, a historian at the White House Historical Association, told the Post.

In the mid-19th Century, it was owned and operated by the Dent family, whose daughter Julia married 18th President Ulysses S. Grant and became the First Lady of the United States. It was built by and profited from slave labor.

Clark said that “records show between 30 and 90 enslaved people living on White Haven depending on the decade.”

Julia Dent Grant’s father gave her and Ulysses S. Grant 80 acres of White Haven when they married, which became the farm where Busch Valentine grew up. President Grant, often remembered for squashing the Ku Klux Klan, owned an enslaved man on the plantation and the couple lived in a cabin called “Hardscrabble” built by slave labor that sits on Busch Valentine’s property today, Clark said.

For a long time, the land was remembered for its association with President Grant, not for its past as a plantation. But in the past few decades, it has been “reinterpreted” to include its legacy of enslavement, Clark added.

Next to Grant’s farm in St. Louis is the National Park Service’s Ulysses S. Grant National Historic Site, which does not shy away from discussing the realities of plantation life on White Haven.

The land that Busch Valentine now owns has been with her family since the turn of the 20th Century when her grandfather August Anheuser Busch Sr. purchased part of White Haven and later took his own life on the land in 1934. In the 1950s, the family opened their land to the public and called it Grant’s Farm. And in 2017, after a public family feud, Busch Valentine and four other siblings bought the farm back.

“Grant’s Farm remains such an important part of my life because it brings so much happiness to others,” the Senate hopeful wrote on the farm’s website. “I’m thrilled that our family group has assumed operations at Grant’s Farm…Our ancestors hoped for this and it is our intention to fulfill that promise.”

But the bucolic vision of Grant’s Farm portrayed by Busch belies not only its slave-holding past but the segregated world she grew up in.

The candidate apologized for her role in the Veiled Prophet ball after The Intercept revealed she was crowned their 1977 queen, saying in a statement in March: “I failed to fully grasp the situation. I should have known better, and I deeply regret and I apologize that my actions hurt others. My life and work are way beyond that, and as a candidate for Missouri’s next US Senator, I pledge to work tirelessly to be a force for progress in healing the racial divisions of our country.”

Yet it’s almost impossible the candidate was ignorant to the organization’s racism.

“It would be very difficult to imagine that she would not know the context of what she was walking into,” said Devin O’Shea, a St. Louis-based writer who has deeply researched the Veiled Prophet’s history.

The ball Busch Valentine won was protested by Civil Rights groups throughout the 60s and 70s.

The year before she was crowned queen, “a protester jumped up on the stage and sprayed pepper spray everywhere,” O’Shea said.

Her father was a prominent member of the Veiled Prophet Society too, who “would have known there was a community-wide objection”, the writer added.

In her launch video entitled “Spring,” Busch Valentine says “for me, it all began at the farm” and discusses the challenges she faced after her husband died of cancer at 49.

“I was left a single mom raising six children,” the Democrat, rumored to be worth a quarter billion dollars and running for the open Senate seat vacated by GOP Sen. Roy Blunt, said.

Moore, of Saint Louis University, said it’s fine for Busch Valentine to have “fond memories” of her childhood at Grant’s Farm, but “it’s not okay to not recognize the complexity of those memories.”

“Systemic racism allows you to have nostalgic memories,” she said. “If you’re running for a political office where you are supposed to represent all, you should apologize and say how are you going to make amends.”

St. Louis, which is 46% black, remains one of the “most racially segregated cities” in the U.S., Moore said, and has a poverty rate of 20%, according to the U.S. Census Bureau.

Meanwhile, Busch was raised in a billionaire family.

“I would hope she makes it part of her agenda to look at the dynamics of race in the state and how she can help improve it,” Moore said.