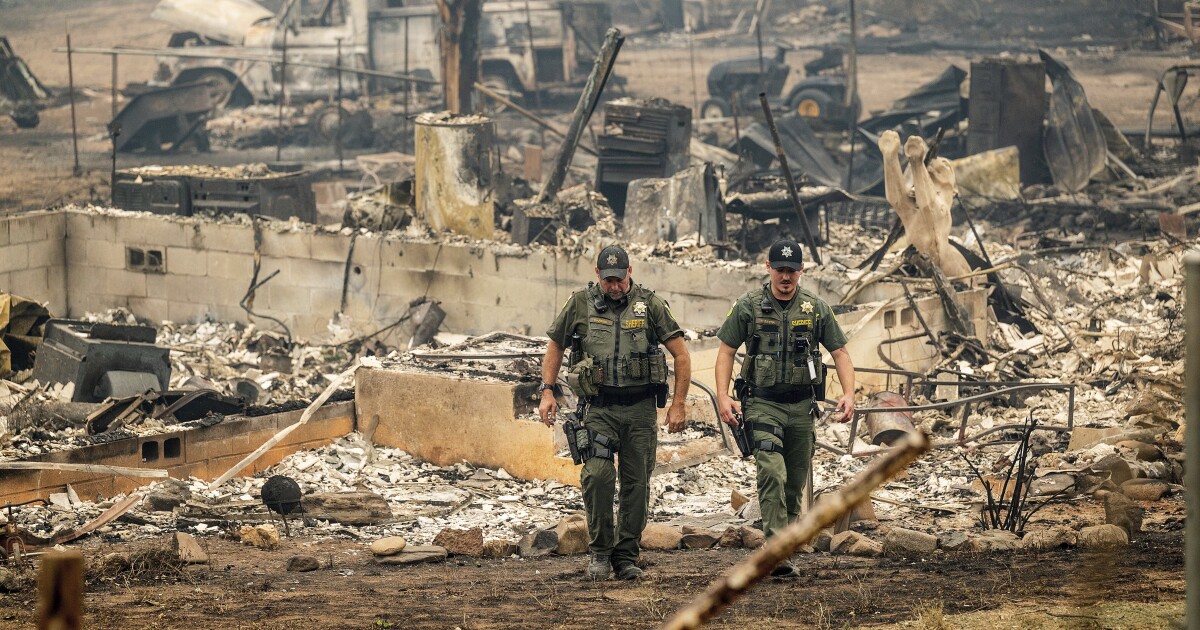 Strong winds expected to sweep through the Shasta Valley could hinder the progress made in recent days by thousands of firefighters in containing the massive and deadly McKinney wildfire burning at the California-Oregon border.

Since it began in the Klamath National Forest late last month, the blaze has killed four people, destroyed 87 homes and consumed 60,044 acres, but its spread has slowed over the past few days, with the California Department of Forestry and Fire Protection reporting 30% containment. It is the largest wildfire in the state so far this year.

Forecasts of wind gusts of up to 30 mph pose significant new risks and prompted the National Weather Service in Medford, Ore., to prepare to issue a red flag warning for Yreka, Calif., and other parts of the valley along Interstate 5 starting Sunday afternoon.

“When you put a lot of wind on a fire, a lot of bad things can happen,” said Ryan Sandler, one of the meteorologists monitoring the situation. Dangerous wind conditions are expected through at least Monday.

CalFire public information officer Aaron Johnson said some 2,700 crew members will continue digging and maintaining control lines around and through the fire, but are preparing for the possibility of more intense flames and new fires.

“With the high winds, it could potentially throw off spot fires,” said Johnson.

Siskiyou County has seen days of 90- and 100-degree heat and very low humidity, and the addition of the strong winds brings the risk of the fire to become “plume dominated” with enormous clouds and erratic behavior, Sandler said. The winds could reach up to 30 mph in the valley and up to 20 mph in the more mountainous area where the fire is burning.

“Because the atmosphere is so hot, dry and unstable, the fire can in effect create its own weather,” he said.

Some areas of the blaze saw up to 3 inches of rain last week, but the intense heat quickly dried the ground and vegetation, and no thunderstorms are expected in the next week.