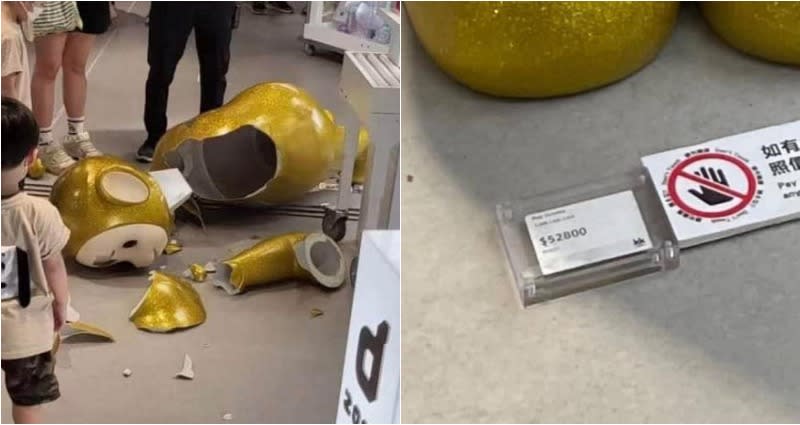 A father was forced to pay HK$33,600 (approximately $4,255) as compensation after his 5-year-old boy knocked over a golden Teletubbies figure in a Hong Kong designer toy store.

On Sunday evening, the man, Cheng, visited the KKPlus store in Langham Place mall in Hong Kong with his wife and two sons. When he stepped out to take a phone call, he reportedly heard a loud crashing sound behind him and discovered that his son had shattered an over-1.8–meter-tall (5.9 feet) golden Teletubbies figure.

“My son was motionless. He was staring down, looking at the toy,” Cheng told Commercial Radio per Hong Kong Free Press.

Staff members informed Cheng and his wife that their 5-year-old son was seen kicking the figure and charged them HK$33,600.

When Cheng watched video footage of the incident on Sunday evening, he suspected that staff members had falsely accused his son. The video showed his son slightly leaning on the figure rather than kicking it as staff members had told Cheng. His wife then reported their finding to the store.

KKPlus uploaded a since-deleted statement to their Facebook page on Tuesday. The statement said that the figure’s retail price was HK$52,800 ($6,726) and that it had never “brought any inconvenience to customers.” It also said that the figure has been in the same spot since November 2021 and that the company will prevent similar accidents from occurring in the future.

After the video footage went viral, however, KKPlus apologized and issued a full refund to the father while the store’s manager admitted to not taking enough precautions in preventing the figure from being damaged.

Study: Chinese state-run hospitals conducted heart transplants on prisoners before they were dead