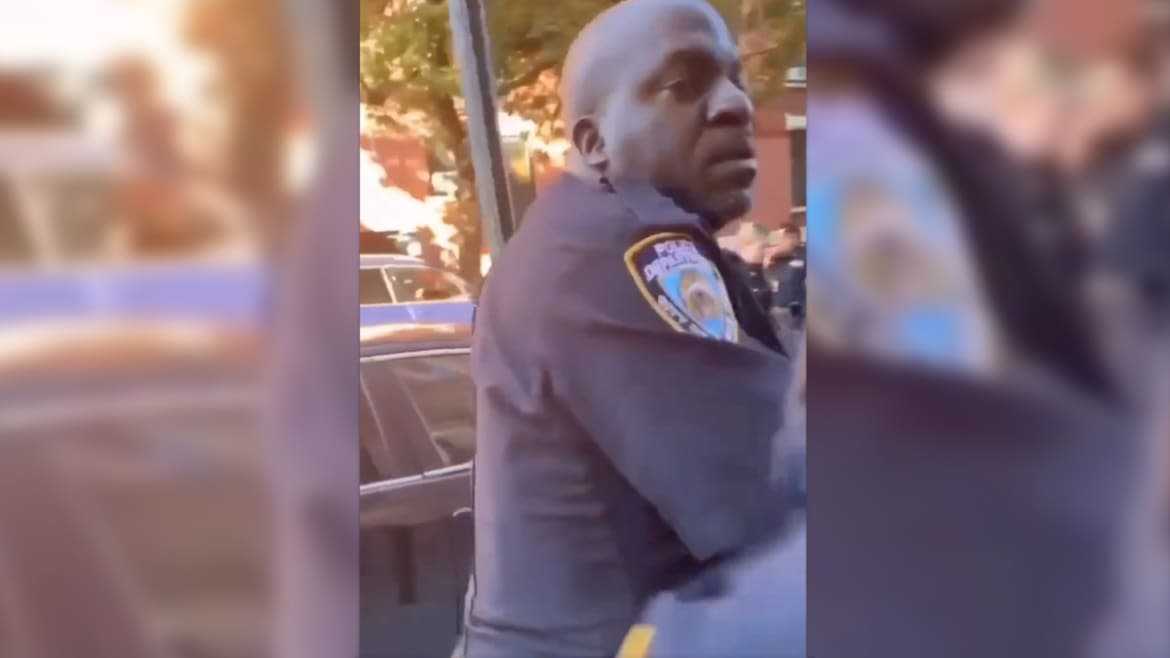 On Tuesday, shocking video emerged of a New York City cop decking a small woman in the face after they exchanged shoves in Harlem.

The viral video, taken by a bystander on 136th St in Central Harlem, shows the not-yet-identified woman appearing to strike the officer’s shoulder with an open hand after he pushed her away from the scene of an arrest.

Then the officer advances, hitting her hard and dropping her to the ground, where she appears to writhe in pain. The cops at the scene then proceed to handcuff the woman before the video ends.

The officer wore a badge and precinct number associated with Detective Kendo Kinsey, a Neighborhood Coordination Officer in Harlem’s 32nd precinct. Reached by phone on Wednesday, Kinsey told The Daily Beast that he was “very much” aware of the video but could not comment.

An NYPD spokesperson who did not sign their name replied to requests for comment by email, but only by expanding on the details of the arrest near 136th street on Aug. 30.

According to the NYPD, the Harlem cops were originally seeking to arrest a man “being sought in connection to an attempted murder.” The spokesperson said that multiple individuals at the scene of the arrest “interfered by physically assaulting numerous officers,” some of whom were arrested.

The unnamed spokesperson did not specify if the woman slugged in the video was ever accused of a crime. But the police violence against her was immediately followed by outrage among those looking on.

“Bro why would you do that? … Just a little girl, bro! “ a bystander can be heard screaming in the video.

Kinsey, who has worked for the NYPD since 2005, has a history of six complaints listed in the database held by the Citizen Complaint Review Board (CCRB) ranging from the years 2014 to 2018. The CCRB is New York City’s independent police watchdog organization.

Two of those complaints were substantiated —or found to be true— for discourtesy and abuse of authority. The NYPD did not discipline Kinsey on the first count but did on the second.

Neither Kinsey nor the NYPD said whether the officer who struck the woman was facing any disciplinary process.