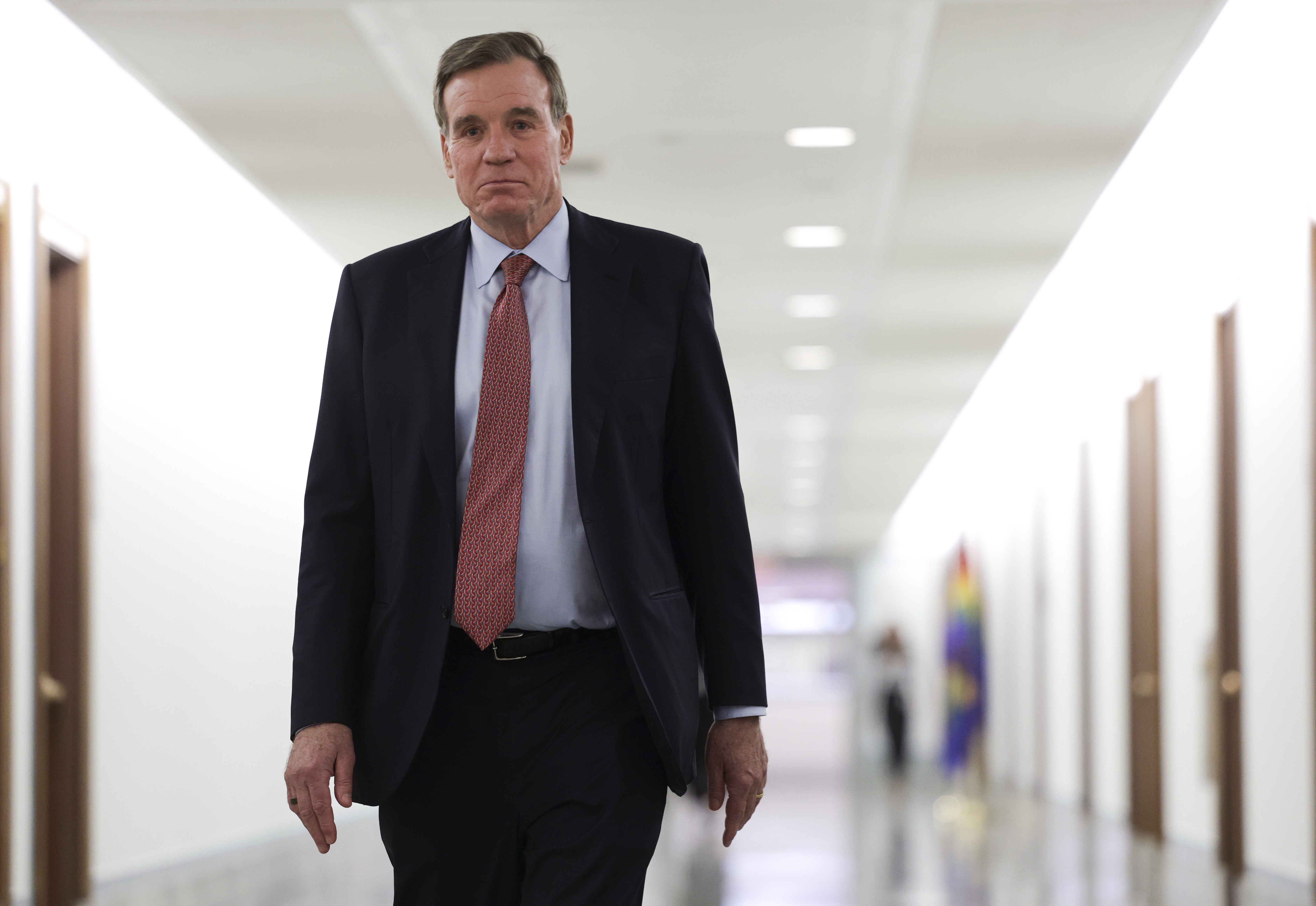 On Thursday, Murphy sent a letter to the 15 private universities with the largest endowments — Harvard, Yale, Duke and the Massachusetts Institute of Technology, among them — asking them to purge their investment portfolios of “entities that are supporting the imprisonment of Uyghur Muslims or aiding the Russian Federation’s horrific invasion of Ukraine.” Murphy also wants those schools to vet their endowment portfolios for any “adversarial entities” named on U.S. government sanction lists.

A successful congressional push to sever U.S. university endowments from Chinese investments could provide a template for legislation requiring private sector investors, including private equity firms and hedge funds, to do likewise, downsizing the U.S. financial sector’s relationship with China.

“Our colleges and universities which have been given a tax-free status do not need to be investing in this nation that wants to see our downfall,” Murphy told POLITICO. “I wanted to start with those institutions that have the biggest endowments and I think it will start a snowballing effect to other institutions.”

Murphy is a China hawk with a record of past — but so far unsuccessful — legislative initiatives targeting malign Chinese influence on U.S. university campuses and on Capitol Hill. Murphy urged Attorney General Merrick Garland in January to revive the Department of Justice’s controversial China Initiative program in order to “root out any possible Chinese espionage” on college campuses.

With Democrats in control, Murphy’s latest effort is unlikely to succeed in this Congress. But his letter is putting universities on notice that Congress wants a say in how they invest their endowments.

The value of U.S. university endowments totaled more than $800 billion in 2021. The endowments of the 15 private schools Murphy is targeting with legislation he’ll introduce in coming weeks have an estimated combined value of $331 billion.

That legislation would “disincentivize” university endowments from investments in firms listed on U.S. government sanction lists, including the Commerce Department’s Entity List, which targets individuals and companies implicated in any “activities sanctioned by the State Department and activities contrary to U.S. national security and or foreign policy interests.” The bill calls for a 50 percent excise tax on the principal and a 100 percent excise tax on any realized profits from investments in such entities.

Murphy’s initiative echoes the efforts of Keith Krach, former under secretary of State for Economic Growth, Energy and the Environment, who urged university governing boards in 2020 to disclose details of endowment investments in Chinese firms and to divest from those on the Commerce Department’s Entity List or linked to human rights abuses. Universities ignored Krach’s advice.

“I’m old enough to know about the anti-apartheid movement in South Africa … [and] the divestment movement that got started at Berkeley and then spread through campuses,” Krach said. “I really wanted [my divestment proposal] to be kind of a catalyst to create a movement … there’s nothing that can be more effective and have more passion and ground forces than students.”

That groundswell of student action has coalesced in the nonprofit Athenai Institute, dedicated to prodding U.S. universities into divesting their endowments of any Chinese Communist Party-linked investments. Athenai’s strategy is to use university divestment of problematic Chinese investments as a roadmap for the private sector to purge its balance sheets of similar holdings.

“University endowments … [are] a substantial pool of money to create momentum for [wider] divestment,” said Athenai’s president, John Metz. “As the pool of university endowment funds and other institutional investor funds which can’t be invested in certain Chinese companies [grows] … it becomes harder for Wall Street to look away.”

Sen. Marco Rubio (R-Fla.) introduced a bill last month that would prohibit universities from any collaborations with Chinese institutions “in areas of cutting-edge technology that could improve the PLA’s ability to wage war against the United States and its allies.”

Rubio and Sen. Mark Warner (D-Va.), chair of the Senate Intelligence Committee, convened a meeting in April with several dozen college presidents organized by the Association of American Universities to voice congressional concerns about ties to problematic Chinese institutions.

The meeting, which included representatives of the FBI and the Office of the National Director of Intelligence, produced a consensus that “there is a real threat out there and that whatever partnerships that [universities] have with China should be viewed that way,” a meeting attendee told POLITICO. The group shared best practices to counter threats from China, such as nurturing relationships with FBI field offices, and university presidents pledged to continue to cooperate on the issue.

University endowments have a history of links to companies implicated in human rights abuses in China. BuzzFeed reported in 2019 that MIT, Duke and Princeton invested endowment funds in a company linked to human rights abuses against Muslim Uyghurs in Xinjiang. Princeton didn’t respond to a request for comment and Duke and MIT declined to comment.

“For far too long … university endowments have unwittingly helped fund Chinese companies responsible for perpetrating pretty egregious human rights abuses and not to mention China’s military,” said Craig Singleton, senior China fellow at the nonprofit Foundation for Defense of Democracies. “We think there’s a broader recognition that the Chinese Communist Party is keen to leverage American capital against American interests.”

Most private universities are reluctant to discuss the possibility that their massive endowments in index funds may seed Chinese firms implicated in rights abuses or technology development that could pose a threat to national security.

Yale’s University Advisory Committee on Investor Responsibility announced in January that it would begin a review of investments linked to its endowment — which totaled $42.3 billion in June 2021 — “to determine whether some may be deemed ineligible for Yale investment in light of the Chinese government’s widespread human rights violations,” the Yale Daily News reported.

Harvard — which boasts an endowment valued at over $53 billion — is considering reducing its endowment’s investments in China due to “growing political and market risk,” Bloomberg reported in April. Both Yale and Harvard declined POLITICO’s requests for comment.

“The most skeptical response we’ve gotten [from universities] has been, ‘Well, this will be difficult for us because we don’t manage our own passive investments and therefore it’s difficult for us to audit our endowment,’” Metz said.

“There’s precedent within these institutions to move their investments because of things that they either don’t like or feel that are better for our environment,” said Murphy. “If they tell their investment company ‘we want to divest out of companies in China,’ it’s very easily done.”

Catholic University of America is pioneering efforts to vet its endowments for problematic investments. CUA administrators in December responded to a student council resolution urging such divestment by reviewing its endowment portfolio to “align investments with moral beliefs.”

“The University is working with Institutional Shareholder Services (ISS), the leading advocate for shareholder concerns to public companies, to identify any company involved in or benefiting from human rights violations, including Uyghur exploitation,” Amber Roseboom, CUA’s associate vice president of university communications, said in a statement. “The ISS deeper dive … searches thousands of publicly available media and stakeholder services to identify areas of exploitation or concerns for other moral abuses. At this point, the search has not identified a company in which the University invests that is known to be involved in or benefit from Uyghur exploitation.”

CUA has inspired divestment activism at other schools. Georgetown University’s Hong Kong Student Association and Muslim Student Association urged school administrators in January to divest the school’s endowment from any investments “that may implicate the university in the ongoing genocide in the Xinjiang Uyghur Autonomous Region.”

George Washington University has a Uyghur Divestment Committee with an online petition calling for endowment divestment from “companies complicit in the Uyghur genocide.” And last month, Cornell University faculty organized a “teach-in” focused on “Cornell Involvement in the People’s Republic of China.”

“It’s extremely important for Cornell and other universities with large endowments to look carefully at some of those investments particularly with respect to Xinjiang, but not exclusively,” said Eli Friedman, associate professor and chair of International & Comparative Labor at Cornell. “There are other companies in China that are engaged in activities that I think do not comport with our stated values like tech companies that are overseeing massive censorship operations.”

Athenai Institute plans to extend its divestment campaign to the endowments of U.S. service universities, including the U.S. Naval Academy, Air Force Academy, West Point, Coast Guard Academy and National Defense University. “Their endowments are much smaller than those held by public and private universities, but almost all of their endowment funding comes from alumni who may or may not realize that their gifts are being used to invest in Chinese companies supporting China’s military,” said Singleton.

POLITICO contacted all five of those service academies for comment. Only the U.S. Naval Academy responded. “The Joint Investment Committee of the USNA Alumni Association and Foundation specifically and proactively discussed the need for our portfolio to have no direct holdings in such Chinese entities,” Heather Epkins, director of communications at the U.S. Naval Academy Alumni Association & Foundation, said in a statement. “We have instituted a periodic review process and an exit strategy process … to date, we have had no direct holdings and have directed our investment managers, via our Outsourced Chief Investment Officer, to avoid such investment.”

Murphy wants universities to embrace the vetting of their endowment investments for problematic Chinese entities as ethically and financially prudent.

“This isn’t meant to penalize anybody, but this is a real problem,” Murphy said. “What greater issue should [we] be divested from than one that is adversarial to our national security?”

Daniel Lippman contributed to this report.