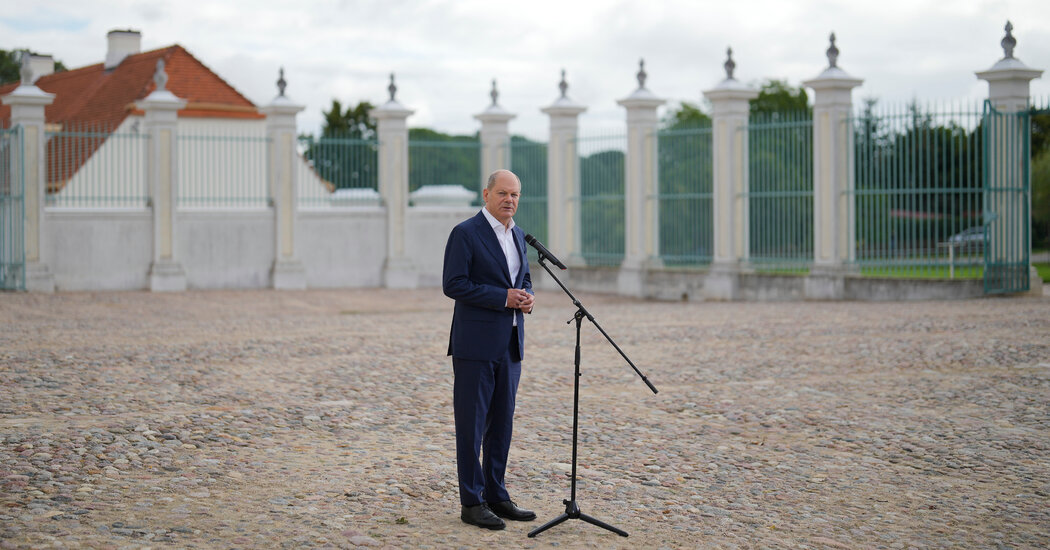 BERLIN — Four days after Russian forces rolled into Ukraine, Olaf Scholz, the new German chancellor whose robotic style had earned him the nickname “Scholz-o-mat,” did something out of character: He surprised people.

In a Feb. 27 speech, Mr. Scholz proclaimed a “Zeitenwende,” or turning point, and announced German plans to play a more ambitious role in military defense in response to the first land invasion of Europe since World War II.

Not only Germans were caught off guard. Europe, too, took note of the chancellor’s pronouncements.

This week, Mr. Scholz tried to do it again in Prague, delivering what he hoped would be a major speech to the European Union. The resounding reception: boredom.

“It was an hourlong lecture,” one German paper complained. “A Sunday sermon,” said another. In Germany’s Süddeutsche Zeitung, the best defense one columnist could offer for the speech was that it “wasn’t uninteresting.”

Even the Czech prime minister himself admitted he had not listened, though he claimed technical difficulties.

The fizzle of Mr. Scholz’s attempt to lay out a grand vision was indicative of his — and Germany’s — broader failure to fill a vacuum of leadership on a continent that is craving it in the wake of Russia’s aggression and the departure of his predecessor, Angela Merkel, the bloc’s unifying force for over a decade.

For Mr. Scholz, part of the struggle is self-made and stems from his failure to live up to his grand “turning point” promises. But his shortcomings are also a reflection of a Germany that is still uncomfortable with the leadership role Europe expects from its largest democracy.

“Germany has to lead — it is condemned to lead,” said one foreign policy analyst, Ulrich Speck. “And we are not finding a constructive approach to this challenge.”

Mr. Speck said Germany would prefer to be what he called a “Mitmach-Mact” — a “joining in power.”

“We don’t see his handwriting, what Scholz really wants in terms of how to deal with Russia, how this war should end, what the trans-Atlantic relationship should look like,” he said. “There’s no big idea from Berlin.”

The chancellor’s officials privately bristle at such critiques and argue that the Prague speech was an attempt to do just that.

And Mr. Scholz did in fact lay out his vision for the European Union.

He committed strongly to expanding the bloc to include not only Ukraine and Moldova but also Georgia.

He welcomed proposals from President Emmanuel Macron of France for more European sovereignty in defense, offering Germany’s air-defense systems to the continent.

Mr. Scholz even articulated an idea of what the European Union means after the watershed moment that Russia’s Ukraine invasion has become.

The E.U., he said, “was born as a peace project,” aiming to prevent war among Europeans within the union. Today it has a “new peace mission,” he argued: “to safeguard its security and stability from the outside.” He clearly had Russia, and to a lesser extent perhaps China, in mind.

Some close to the chancellor are still scratching their heads over why the speech did not land better.

Critics have blamed Mr. Scholz’s leaden approach, but the tepid response may also signal European skepticism over his leadership given that his “Zeitenwende” has yet to live up to its name.

In the speech, Mr. Scholz vowed to finally commit Germany to its NATO pledge of spending 2 percent of its gross domestic product on defense “from now on.” That target looks likely to be missed for the next two years.

On top of that, many weapons Germany promised Ukraine have yet to arrive. For reasons that are unclear, Mr. Scholz never made a wholehearted attempt to explain the complications some deliveries faced, nor did he flaunt the weapons Germany had delivered.

“Scholz did not make a story out of what Germany actually has been doing,” said François Heisbourg of the Foundation for Strategic Research in Paris. “They don’t claim credit, so they don’t get it.”

These days, however, Mr. Scholz is receiving a warmer reception in Paris. In the chancellery, Mr. Scholz’s Prague speech was portrayed as a “five-year delayed” response to Mr. Macron’s famous 2017 speech at the Sorbonne, where he proposed the concept of European sovereignty instead of dependence on NATO.

The Sorbonne speech received a notably cold response from Ms. Merkel. Mr. Scholz, in contrast, now wants to engage with those ideas, as well as Mr. Macron’s latest pitch for a “political European community,” offering regular meetings between E.U. members and European states outside the bloc.

Still, the initiative to address Europe’s biggest crisis in decades is coming from Washington. And it is also coming from parts of the European Union not accustomed to taking the lead: It was Baltic and Eastern European countries that called for tougher sanctions on Russia and military support to Ukraine.

“They pushed Europe to go further, and they pushed Germany, too,” said Jana Puglierin, head of the European Council on Foreign Relations in Berlin. “What we now see emerging are central eastern European and northern European power centers.”

Whether that is a good outcome is debatable. To observers like Mr. Speck, it reflects a dangerous rift. “It’s not just Central Europeans, it’s Scandinavians as well,” he noted. “I think there’s a risk he underestimates the depth of this rift.”

Mr. Scholz’s speech was meant to be a reset.

Both the chancellor and Mr. Macron got off to a shaky start with Eastern Europe in the lead-up to the Russian invasion — first, by insisting far longer than their Eastern European and Baltic partners on talks with President Vladimir V. Putin of Russia, and second, by arguing that an offramp to the war required ways for Mr. Putin to save face.

Frustrations with Berlin were compounded by years of its insistence on the Nord Stream 2 pipeline bringing Russian gas to Germany. Long contested by Eastern European neighbors, which feared increased dependency on Russia, it was shepherded past U.S. sanctions threats by Ms. Merkel and halted by Mr. Scholz only after the invasion.

European reliance on Moscow’s fossil fuels — especially in Germany, where more than half the gas imports came from Russia — has come to bite. The continent faces a costly energy crisis, one that risks becoming far bleaker this winter.

Mr. Scholz’s speech was intended — but failed — to heal those divisions.

Delivering it in Prague was meant to symbolize his embrace of the East, with him explicitly saying that “Europe is moving eastward.” He also made a point of telling his audience that he was exchanging ideas, not offering “ready-made German solutions.” Yet by canceling a question-and-answer session with students after, he reinforced the notion of a Germany out of touch with Eastern Europe.

“He wanted to send his message, but he didn’t want to enter a real conversation,” Mr. Speck said.

Mr. Scholz has done little to alleviate the perception of Germany as a foot-dragging “no” country amid an extremely dangerous period of crisis for Europe, some analysts said. Not only was it slow to give weapons to Ukraine, it is resisting keeping on its three remaining nuclear power plants. Doing so would not only contribute to European electricity needs, critics argue, but also be a symbolic gesture to Europe.

There is particular worry over Germany’s relationship with Poland, a critical player in Eastern Europe that has led the way in supplying Ukraine and taking in its refugees. Berlin’s shoddy relations with Warsaw, Mr. Speck argued, might complicate future debates over what shape the end of the Ukraine war should take.

But if he has so far missed his moment, Mr. Scholz may well have others. New opportunities to lead Europe are likely to emerge whenever a dramatic new shift on the battlefields of Ukraine occurs, or during Europe’s seemingly inevitable energy crisis this winter.

Mr. Macron has been preparing for that, some say, by recalibrating his tone to be more in line with Kyiv, which is starting to gain some traction in the East. The chancellor’s speech this week may also help him. But without more original ideas, his critics say, Mr. Macron’s leadership hopes may continue to be frustrated.

A former British member of the European Parliament, Andrew Duff, summed up Europe’s awkward leadership tryouts this week with one Twitter post: “Mainly rather dull and nothing new,” he wrote after Mr. Scholz’s speech. “Back to Emmanuel Macron then.”