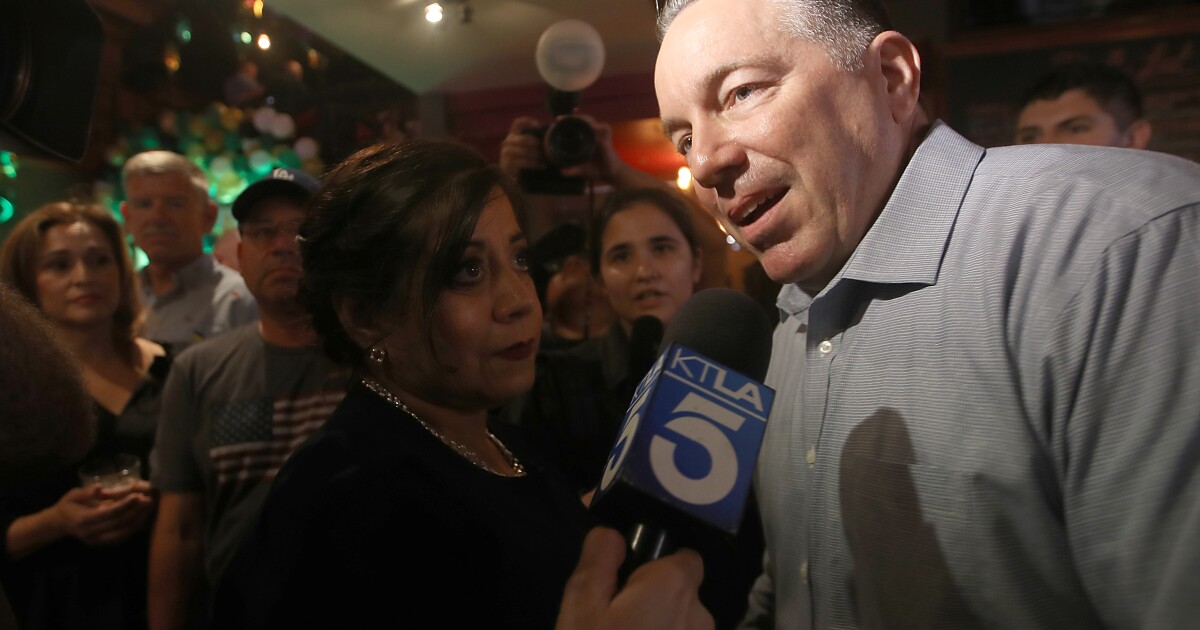 In 2018, this two-story bar off Cesar Chavez Avenue had hosted history. That November on election night, Alex Villanueva became Los Angeles County sheriff after he beat Jim McDonnell — the first time a challenger had defeated a living incumbent in over a century.

Four years later, over 200 people filed into Cities expecting another historic night. What else could the outcome be? The Left was on the retreat in deep-blue California, they thought.

In San Francisco, voters overwhelmingly recalled progressive Dist. Atty. Chesa Boudin. In Los Angeles, Dulce Vasquez and Eunisses Hernandez, young Latinas who preached a defund-the-police message during their city council runs, were losing. The recall campaign against Los Angeles Dist. Atty. George Gascón was in a good spot to get the required number of signatures to qualify.

When Villanueva finally arrived at his victory fiesta through a back door, the crowd roared. Everyone looked dressed as if they were attending a reunion for the class of 1987 at Schurr High in Montebello — Tommy Bahama shirts and checkered long-sleeved shirts for men, modest dresses and skirt-and-top combos for women. Everyone was scarfing up strawberry cake topped with white frosting and green and white sprinkles, the colors of the Villanueva campaign.

Their man shook hands, posed for photos, then went upstairs to the VIP lounge, where he mingled with friends and family to await the first ballot results of the night. About 10 minutes later, the joyous spirit of the room disappeared as people opened their smartphones to visit the website of the Los Angeles County Registrar of Voters.

Villanueva was in first place, at 30.4%. In second place was former Long Beach police chief Robert Luna, at 28%. Six other challengers took the rest of the votes.

As more votes are counted, those percentages will change, but this likely won’t: The sheriff will be forced into a runoff. At which point, there’s a distinct chance voters might run him off.

Villanueva will have to vie against Luna in November despite the sheriff having raised more than three times as much in campaign contributions than Luna and outspending him nearly 6 to 1. Despite Villanueva having ditched the progressive platform that secured his 2018 upset — kick ICE out of L.A. County jails, crack down on wage theft, lean on labor and liberal activists for support — for a scorched-earth campaign that sought to put all of society’s ills on the “woke left” and the region’s Democratic politicians, a party that Villanueva happens to belong to.

During a time when poll after poll show that crime and homelessness — two issues Villanueva claims only he can truly solve — are on the minds of all voters.

The crowd at the sheriff’s soiree mumbled and drank and waited.

This party wasn’t going as planned.

The sheriff didn’t come down for a while. When he did, his smile now seemed tacked on, like the grin on a Mr. Potato Head.

He shook more hands, posed for more photos, barely acknowledged the Puerto Rican flags someone had unfurled and went back upstairs. He did this a couple more times, each session shorter than the last. At one point, the televisions behind the bar showed an image of Luna, as Villanueva helplessly looked on.

Moses Castillo, a retired Los Angeles police detective who runs an Instagram account that praises Villanueva and trashes his opponents — including me — was subdued. “I didn’t expect Luna to be so high,” he said on a livestream to his audience.

Every incumbent sheriff in modern-day Los Angeles County who faced a runoff went on to lose — McDonnell four years earlier, and Sherman Block in 1998, who was expected to go down in defeat against Lee Baca but died just four days before election day.

Around 10, Villanueva finally took the stage to give a speech. His song of choice: “I Won’t Back Down” by Tom Petty.

But the sheriff kinda did.

He started with a swipe at Boudin, then said “George Gascón, you’re next!” to cheers. It was red meat to his supporters, but they wanted reassurance that the disastrous results before them couldn’t possibly be true.

“It’s kinda hard to see where [the votes] are going,” Villanueva finally. “But we’re on top, and we’re going to stay.”

He then began to complain. His underwhelming lead that night wasn’t because of his scandals, his brusque attitude, his paranoid and petty approach to perceived enemies like my colleague Alene Tchekmedyian, whom Villanueva had insinuated during a press conference earlier this year was part of a criminal leak investigation and to whom the campaign denied entry earlier in the day because they wanted to keep a “positive environment.”

Nope. It was the fault of others.

He said the sheriff’s race was like playing “eight-on-one basketball,” with opponents funded by “opportunists” who wanted to torpedo his regime.

He railed against the “political establishment” and the L.A. County Board of Supervisors and “cancel culture” and “fake media” and the people who “drag[ged] me under 50”% of the vote and thus denied him an outright victory.

He vowed to win in November, even though his critics — who never managed to coalesce around any one challenger — will probably unite behind Luna by that time like the Avengers going after Thanos.

“When the truth and the Good Lord is on your side, we’re going to win,” the sheriff said. “We work with reality, with facts, and with evidence.”

“What did Mr. T say?” Villanueva suddenly blurted, to everyone’s befuddlement. “I pity the fool.”

The sheriff finished and walked toward the stairs. The speakers blasted Petty wailing, “Hey, baby! There ain’t no easy way out.”

People gamely tried chants of “Four more years!” and “Villa-nue-va!” but they petered out fast. The throngs who had wanted some time with him before now numbered just large enough to start a cover band playing sad country songs.

Two volunteers blocked me and a KPCC reporter from approaching the sheriff as he offered remarks to television stations. When it became obvious we wouldn’t be able to talk to him at that point, I yelled out my question:

If Los Angeles was so afraid of crime, then why couldn’t Villanueva break 50% of the vote?

He stopped his ascent, as if he thought of responding. But Villanueva continued upstairs.

I repeated my question. “Because Gascón,” snapped one of the volunteer door people, a young woman who had been friendly to me until then and now refused to give her name.

I asked her to explain how the D.A. caused Villanueva’s underwhelming night.

“Because he’s letting the people out,” she responded. When I pointed out that the D.A. wasn’t running against Villanueva, the volunteer didn’t respond. Instead, she waved someone upstairs and resumed her locked-arm stance.

By the end of the night, Villanueva had slightly increased his lead over Luna. But even then, it was the lowest percentage an incumbent sheriff had ever received in a primary election in at least a century.

And so the sheriff would do what no incumbent L.A. sheriff ever wants to do — get into a risky runoff.

It turned out Cities Restaurant had hosted history again. Just not the kind Villanueva had hoped for.