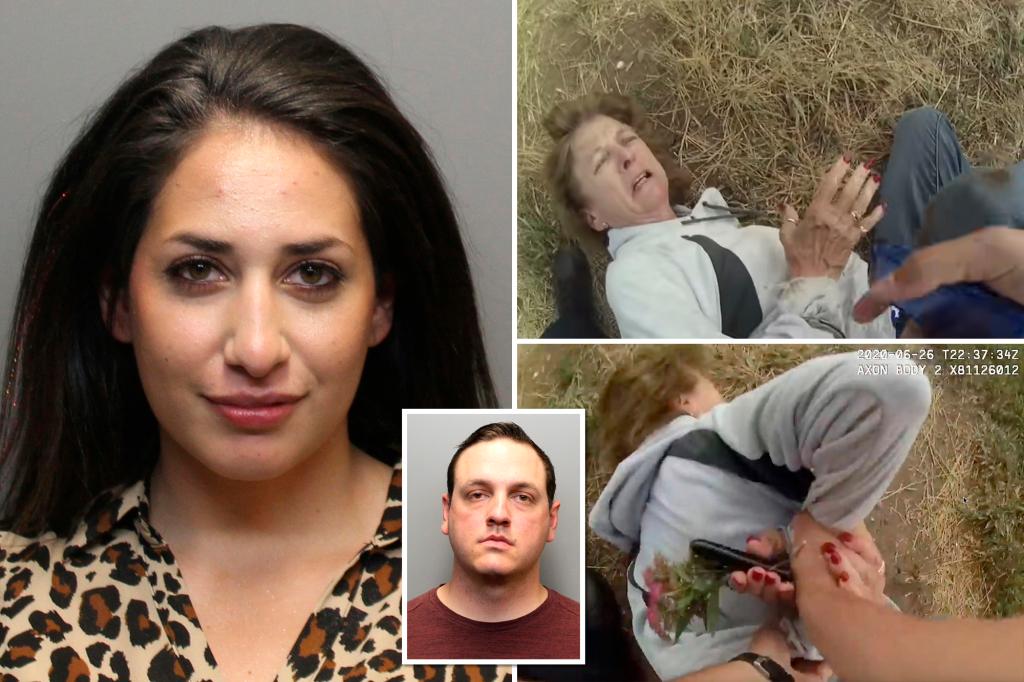 A former Colorado police officer was sentenced to 45 days in jail for failing to stop her colleague from roughing up a grandmother suffering from dementia — and then laughing about the brutal arrest while watching it on body camera video.

Daria Jalali, 28, learned her fate on Friday, in connection to the June 2020 arrest of 73-year-old Karen Garner, which has made national headlines. In addition to jail time, Jalali also received three years of probation

She pleaded guilty to a charge of failure to intervene with an officer using excessive force — a crime created by lawmakers as part of a reform bill passed during protests over racial injustice and police brutality in 2020.

Jalali, who resigned as an officer with the Loveland Police Department in April 2021, along with two of her colleagues, had faced up to 60 days behind bars.

Garner was arrested by Officer Austin Hopp on June 26, 2020 after she left a Walmart without paying for $14 worth of items — a candy bar, a Pepsi and a t-shirt.

After Garner turns away from Hopp, the footage shows the officer grabbing her arm and pushing her to the ground and handcuffing her.

He shoved the 80-pound elderly dementia patient against the hood of his car and, after she tried to turn around, he moved her bent left up arm up near her head. Soon after, Garner began to slump toward the ground. Jalali, who arrived after Garner was handcuffed, says, “Stand up! We’re not going to hold you.”

Video from the Loveland police station that was released by Garner’s lawyer showed several cops laughing, joking and exchanging fist-bumps about her arrest.

“It’s just like live TV,” Jalai says in the recording. “Body-cams are my favorite thing to watch, I could watch livestream body-cams all day.”

Hopp was sentenced in May to five years in prison for his treatment of Garner, who was said to have sustained a broken elbow, a dislocated shoulder and extensive bruising.

Loveland settled a lawsuit filed by Garner for $3 million. Garner’s family has said her condition deteriorated after her arrest and she requires around-the-clock care as a result.

Jalali apologized to Garner and her family in court, the Loveland Reporter-Herald reported. She told Judge Joshua Lehman that she thought Garner was intoxicated and believed Garner was only complaining about her handcuffs so she could get out of them.

“I wanted to be a good police officer and my heart was in the right place, but I still came up short,” she said.

Jalali’s lawyer, Anna Geigle, said Loveland police and another department let her stay on the job despite a pattern of poor performance recorded in her personnel files. A neuropsychological evaluation showed Jalali did not have the “psychological makeup” to act with the precision and awareness expected of police officers, she said.

Lehman said Jalali should have known Garner was a “delicate” woman suffering from a mental health issue.

“She just sounds out of it and terrified to me,” the judge said after watching body camera footage from the arrest for the first time in court. “The fact that two law enforcement officers couldn’t comprehend that is incomprehensible to me.”

Garner’s son, John Steward, told the judge Jalali had no idea of the stress, pain and sadness the arrest has caused his family.

“We all have choices to make in life, and all our choices have consequences,” he said. “I ask that justice be served for my mom today.”