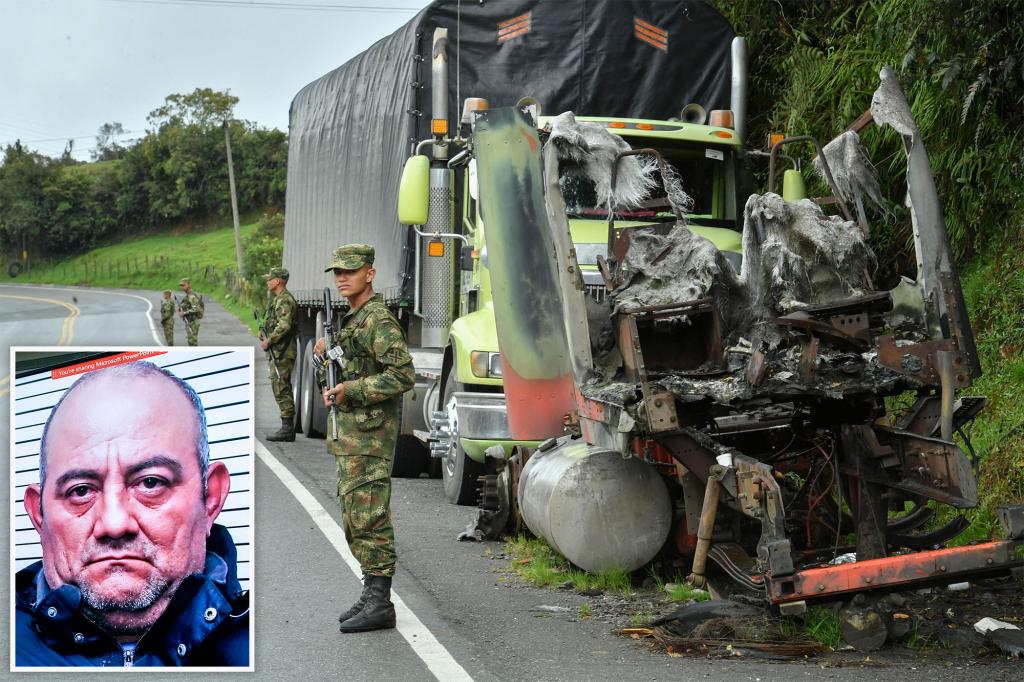 BOGOTA, Colombia — The Gulf Clan drug cartel shut down dozens of towns in northern Colombia for four days in reaction to its leader being extradited to the U.S. for trial. It warned that anyone who disobeyed the stay-at-home order risked being shot or having their vehicle burned.

Businesses closed, schools stayed shut, intercity bus service was suspended and a professional soccer match couldn’t be played after one of the teams refused to travel to the game.

The Gulf Clan’s “armed stoppage” decree was issued Thursday in pamphlets and What’sApp messages following the extradition of Dairo Antonio Usuga — also known as Otoniel — to the United States, where he faces drug trafficking charges.

The action appeared to be winding down Monday, according to reports from human rights groups and the Roman Catholic Church, after underlining that the cartel is still a major security threat despite Otoniel’s highly publicized arrest last year.

“The security strategy of focusing on high profile targets does not guarantee security for civilians,” said Elizabeth Dickinson, a senior analyst at the International Crisis Group.

Camilo Gonzalez, the president of Colombian think tank Indepaz, said: “Drug trafficking will not end with the capture of Otoniel. When they captured Pablo Escobar they said drug trafficking would be over, and today there is more of it than back then.”

According to Colombia’s Ministry of Defense, three civilians and three police officers were killed during the four days of the shutdown and more than 180 cars were burned for apparently violating the cartel’s order, mostly on rural highways.

Even worse numbers were reported by the Special Jurisdiction for Peace, a tribunal created following the 2016 peace deal between the Colombian government and the Revolutionary Armed Forces of Colombia rebel group.

The tribunal said 24 civilians were slain in areas covered by the Gulf Clan’s stoppage, which it said forced people to stay home in 138 municipalities in the northern provinces of Choco, Sucre, Bolivar, Antioquia and Cordoba.

In Monteria, a provincial capital of almost 500,000 residents, commerce shut down for four days and the local gas company stopped delivering cylinders to homes. A soccer match between local team Jaguares and a club from Medellin was suspended Sunday because the visitors refused to travel to Monteria in fear their bus would be attacked by cartel enforcers.

The Gulf Clan, which also calls itself the Gaitanista Self Defense Forces of Colombia, was founded in the first decade of this century by leaders of paramilitary groups that refused to join a demobilization agreement in which other groups took part.

Otoniel, the Gulf Clan’s most recent leader, had long been a fixture on the U.S. Drug Enforcement Administration’s most-wanted list.

He was first indicted in 2009 in Manhattan federal court on narcotics charges and for allegedly assisting a far right paramilitary group designated as a terrorist organization by the U.S. government. Later indictments in Brooklyn and Miami federal courts accused him of smuggling at least 73 metric tons of cocaine into the United States between 2003 and 2014.

Colombian authorities have sought to play down the cartel’s stoppage, saying they deployed 52,000 soldiers to ensure the security of civilians in the affected areas.

President Ivan Duque said Saturday that actions taken by the cartel’s members were “isolated incidents” aimed at intimidating locals insisting that the organization is now weaker and its leadership has been fragmented.

Police offered rewards of more than $1 million for the capture of three men who have been identified as the clan’s new leaders. But critics of the government said the clan’s days are far from over.

“The government can eliminate important leaders,” said Gonzalez, the Indepaz think tank president. “But this is a a mafia network that also includes politicians and money launderers. And it is also involved in human trafficking, illegal gold mining and other businesses.”