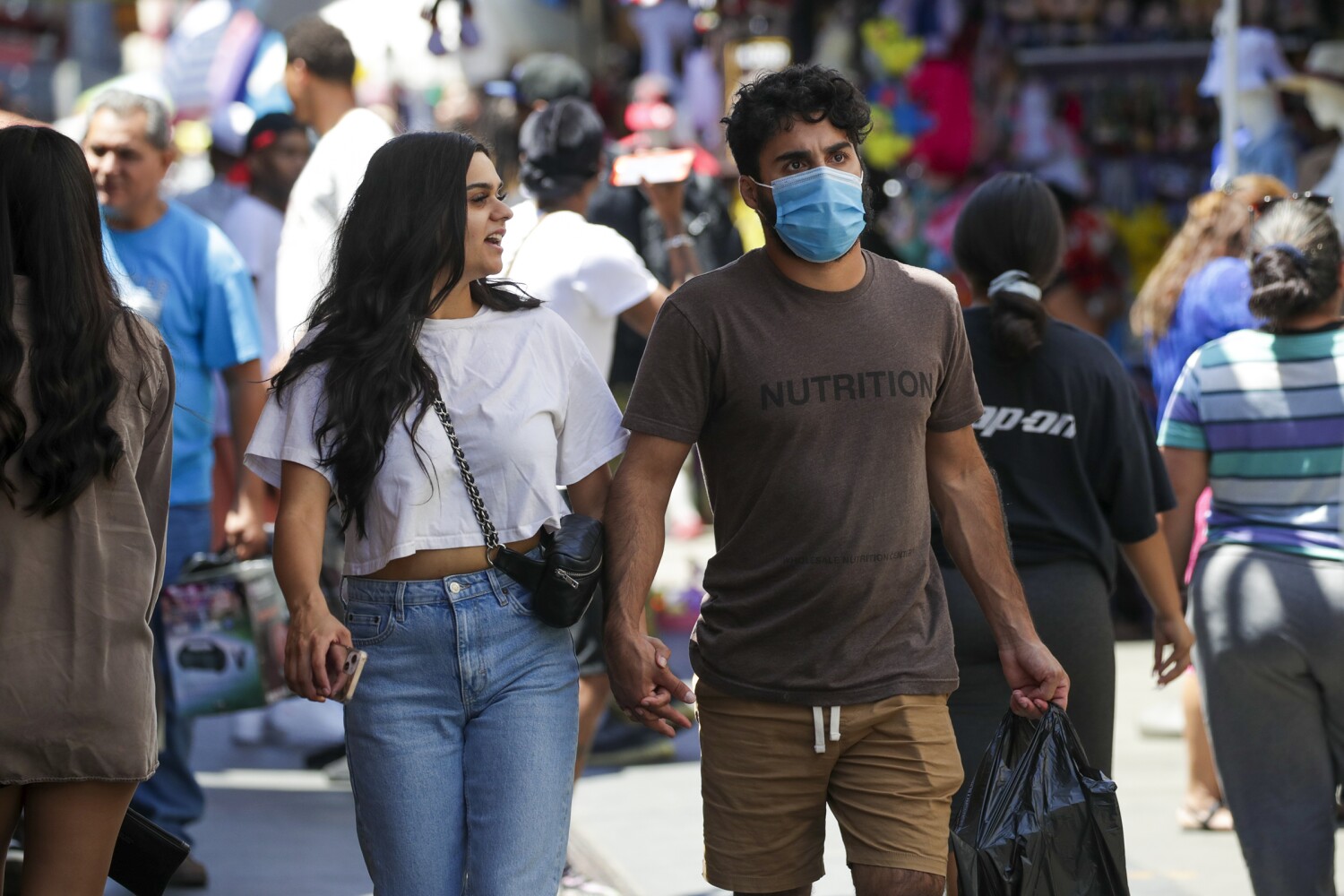 Health officials recommend that anyone infected with the coronavirus isolate for at least five days. But for many, that timeline is becoming overly optimistic.

The isolation period, which the U.S. Centers for Disease Control and Prevention shortened in December from 10 days to five, is more a starting point than a hard-and-fast rule in California. According to the state Department of Public Health, exiting isolation after five days requires a negative result from a rapid test on or after the fifth day following the onset of symptoms or first positive test — a step not included in federal guidelines.

But many people don’t start testing negative that early.

“If your test turns out to be positive after five days, don’t be upset because the majority of people still test positive until at least Day 7, to Day 10 even,” Dr. Clayton Chau, director of the Orange County Health Care Agency, said during a briefing Thursday. “So that’s the majority. That’s the norm.”

But even typical, longer isolation periods carry very real effects, such as keeping people away from family and friends and out of work. While it may be disruptive, isolating is intended to stymie the spread of the coronavirus.

Dr. Robert Kosnik, director of UC San Francisco’s occupational health program, said at a campus town hall in July that there’s an expectation people will test negative on Day 5 and can return to work the next day.

“Don’t get your hopes up,” Kosnik told his colleagues. “Don’t be disappointed if you’re one of the group that continues to test positive.”

In fact, some 60% to 70% of infected people still test positive on a rapid test five days after the onset of symptoms or their first positive test, meaning they should still stay in isolation, Kosnik said.

“It doesn’t significantly fall off until Day 8,” he said.

A study published by the CDC in February found that 54% of patients had positive antigen tests between five and nine days after an initial diagnosis or the onset of symptoms, though “the proportion of positive results declined over time.”

People with symptomatic COVID-19 were more likely to continue testing positive five to nine days after symptoms first appeared. In the study, 64% of symptomatic patients still tested positive in this time frame.

The proportion of positive test results “was lower after asymptomatic than symptomatic infection,” researchers found.

In general, the study said, “lower prevalence of positive test results over time and after asymptomatic infections might reflect lower infectiousness.”

Here’s a summary on guidance for isolation from the California Department of Public Health, which are also requirements in Los Angeles County.

Day 0: Start of COVID-19 symptoms or the day of your first positive coronavirus test, if you’re asymptomatic. Wear a highly protective mask around others if in the same room as others in your home.

Day 5: You can take a rapid test. If you test negative, don’t have a fever and your symptoms are improving, you can exit isolation on Day 6.

Days 6-10: You can end isolation if your rapid test result — taken on Day 5 or later — is negative, you’ve been fever-free for 24 hours without taking fever-reducing medicines and your symptoms are improving or you don’t have symptoms. The California Department of Public Health strongly recommends still wearing a well-fitting mask around other people until the end of Day 10. In L.A. County, it’s a requirement that recently infected people who return to their workplace wear a mask through the end of Day 10.

Day 11: You can generally end isolation without needing a negative rapid test result. But if you still have a fever, stay isolated until 24 hours after the fever ends. And if you are immunocompromised or have had severe COVID-19, you might need to isolate longer.

“If you do not have access to an antigen test, then we feel pretty comfortable that 10 days after your symptoms start, you are no longer infectious,” Orange County Deputy Health Officer Dr. Matthew Zahn said.

It’s worth noting that the isolation guidance from the state Department of Public Health is stricter than what is issued by the CDC. Federal guidance says people can end isolation — without a negative test result — on Day 6 as long as they are fever-free for 24 hours without using fever-reducing drugs and other symptoms have improved; however, they should wear a well-fitting mask around people through the end of Day 10.

But the CDC guidance has come under criticism from some experts who say it’s too lax.

Some people experience a recurrence of coronavirus-related symptoms or may start testing positive again. It can sometimes happen after taking Paxlovid, an anti-COVID oral medication that dramatically reduces the risk of hospitalization. But it also can happen without taking that medication.

The most recent notable example of Paxlovid “rebound” was President Biden, who again tested positive for the coronavirus over the weekend, just days after exiting isolation.

“I’ve got no symptoms, but I am going to isolate for the safety of everyone around me,” he wrote on Twitter after his latest positive test.

Though the rebound issue no longer appears to be as rare as once thought, officials note that Paxlovid remains highly effective.

If COVID-19 symptoms return, or rapid test results turn back positive after testing negative, the CDC recommends following isolation guidance again to reduce risk of coronavirus transmission to other people.