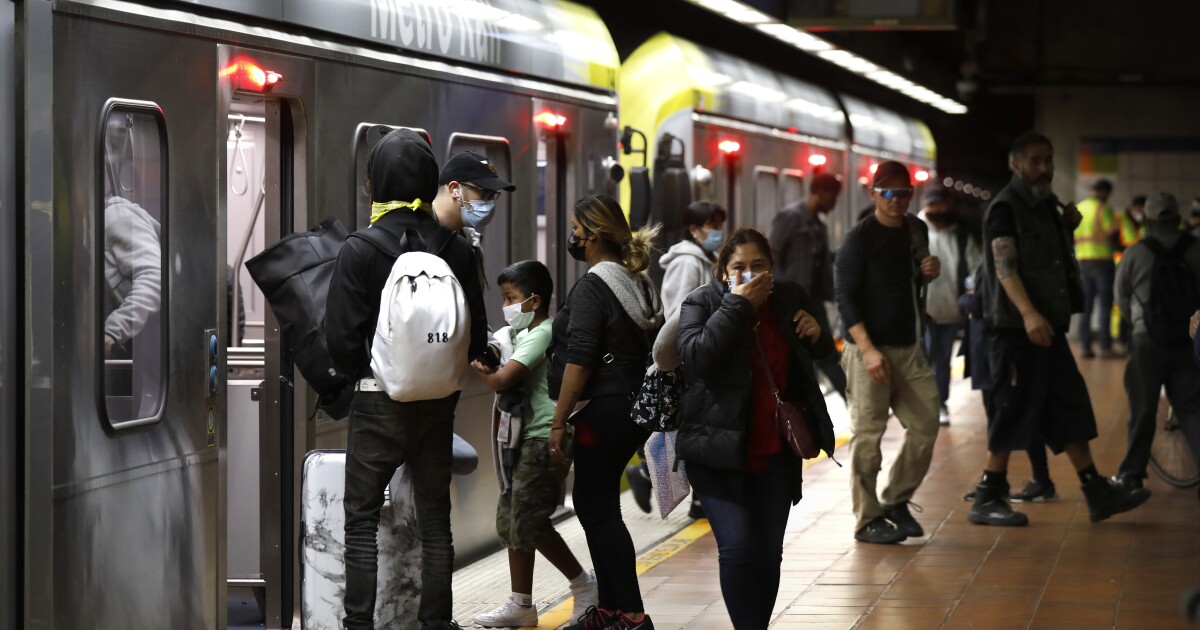 The $8.8-billion budget approved by the directors of the Los Angeles County Metropolitan Transportation Authority will fund an effort to bring back riders and clean up the agency’s battered image.

Metro is doubling the amount it will spend on unarmed “ambassadors” to help make people feel safer on buses and trains, adding more mental health and homeless outreach teams, restoring bus services and increasing cleaning. Overall funding in fiscal year 2023 for public safety will jump 12.5% from the previous year.

“It’s clear that in order for us to deliver a great customer experience, we have to ensure that our customers, employees and vendors are safe,” Metro Chief Executive Stephanie Wiggins told the board. “That’s one of the reasons why the proposed budget that’s before you today includes the largest investment in safety, cleanliness and customer experience ever. The budget will help us shift from being reactive to problems to being proactive with solutions.”

The pandemic pummeled transit agencies across the country. In Los Angeles, Metro ridership plunged as businesses closed or shifted to remote work and homeless people took over the largely empty buses, trains and transit stations. Violent crime is up 81% on the system for the first three months of the year. Patrons complain of soiled seats and elevators reeking of urine. At the same time, a shortage of drivers operators forced the agency to cut bus and rail frequency, hurting the largely low-income riders that still depend on Metro.

About two-third of Metro’s riders use the bus, and they are among the region’s poorest, often without access to a car. Metro estimates that it will need about 600 new drivers to come up to pre-COVID staffing levels and restore the frequency of its services.

The agency has begun to develop a program that will reach out to potential employees who have English as a second language, in hopes of tapping a new labor pool. But the effort has yet to yield results.

The new budget is aimed at remedying woes big and small, right down to the fabric seats, which will all be replaced by the end of next fiscal year.

“The increase in the safety and cleanliness is great. It’s a tough pill to swallow that we need to be celebrating that at this stage of the game,” said Jessica Meaney, executive director of Investing in Place, a nonprofit transportation advocacy group. “Nevertheless, that’s a great step forward, but we still have infrequent and unreliable buses because of the bus operator crisis.”

In a letter to the board, Meaney’s group chided Metro for its lack of investments in bus operations, which have changed very little over the last 28 years. The group noted the amount of hours buses run has remained flat since the agency was formed in 1993, but today bus speeds are even slower.

One upside for commuters is the expected addition of more rail service coming online this year. Two projects, both behind schedule, are expected to add needed capacity. A 1.9-mile underground light-rail extension downtown is expected to open in the coming year and will link the L (Gold), A (Blue) and E (Expo) lines to make connections easier. The K (Crenshaw/LAX) line will run from the Expo line in the Adams district to the Los Angeles International Airport and is expected to be partially open this year.

But there’s some skepticism that all these extra dollars will make the system safer.

“I am continually dismayed at some of the images that I’m getting about the state of our cleanliness and the the activities that are going on the transit lines,” said Metro board member Ara Najarian. “I will look closely to see if this reimagining or this redirection of resources as we put it, make any dent in any of that, and I will hold my decision until we give that a fair chance to work its way out.”