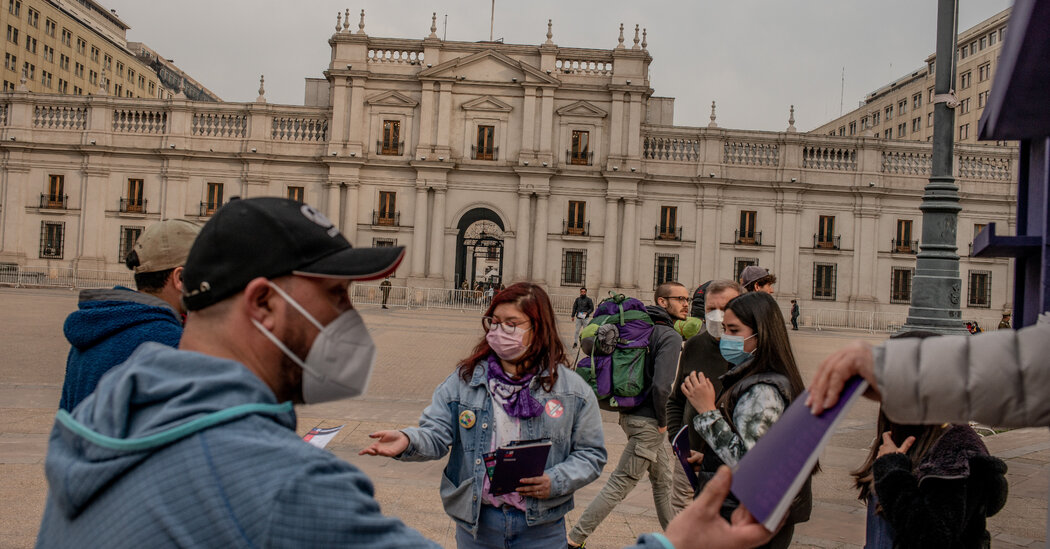 SANTIAGO, Chile — Voters in Chile on Sunday could transform what has long been one of Latin America’s most conservative countries into one of the world’s most left-leaning societies.

It is perhaps the most important vote in the 204-year history of this South American nation of 19 million — a mandatory, nationwide plebiscite on a written-from-scratch constitution that, if adopted, would be one of the world’s most expansive and transformational national charters.

After three years of protests, campaigning and debate, the country’s future boils down to a simple, single question: Approve or reject?

If voters approve the text, Chile, which legalized divorce only in 2004, would suddenly have more rights enshrined in its constitution than any other nation. If they reject it, Chile would have little to show for what had once been seen as a remarkable political revolution.

Now, it appears the sweeping ambition of Chile’s proposed constitution could also be its downfall.

Many Chileans worry that the new charter would too drastically change their country, and their concerns have been amplified by confusion over the details, uncertainty over the impact and rampant misinformation.

“How the hell do you vote on a constitution with 388 articles?” said Gabriel Negretto, a political science professor in Chile who has studied constitutional reforms across the world. “You are overwhelming voters.”

Chile fits into a recent trend of new constitutions providing more human rights than older charters, Mr. Negretto said. The three current constitutions with the highest number of rights, Ecuador, Bolivia and Serbia, were all enacted since 2006.

If voters reject the proposed Chilean constitution, it would be a major setback for the new administration of President Gabriel Boric, a tattooed, 36-year-old former student-protest leader who took office in March, but has quickly faced plummeting approval ratings amid rising inflation and crime. The constitution would enable Mr. Boric to carry out his leftist vision, while rejection could mire his term in more political fighting about what to do next.

A year ago, most Chileans would have bet that the country would embrace the proposed constitution. There has long been widespread discontent with the current constitution, which has roots in the brutal dictatorship of Gen. Augusto Pinochet, who ruled from 1973 until 1990.

In 2019, nationwide protests that left 30 people dead led Chile’s political leadership to grant a referendum on the constitution. A year later, nearly four out of five Chileans voted to replace it.

But now polls suggest that Chileans will reject the replacement. In May, details emerged about the sheer scope of the final proposal, and since then, “rechazo,” or reject in Spanish, has had a consistent and sizable edge in polls over “apruebo,” or approve.

“I’m waking up at 5 in the morning. I’m very stressed,” said Claudia Heiss, a political science professor at the University of Chile who helped the government create the process to draft a new text.

“I think that ‘rechazo’ will win,” she added. “And all of this will be for nothing.”

Still, there is a wild card. Since, unlike other elections, Sunday’s vote is mandatory, with a minimum penalty of $30 for failing to cast a ballot, voter turnout could break records.

A rejection of the proposed constitution would be a huge historical exception. Over the past 230 years, 93 percent of the 179 national plebiscites on new constitutions have been accepted, according to an analysis by Zachary Elkins and Alex Hudson, two political scientists.

“The fact that we have a discussion of who’s going to win is a failure of the political system,” Ricardo Lagos, the president of Chile from 2000 to 2006, said in an interview.

Mr. Lagos, a center-leftist who had been an ardent supporter of a new charter, said leftists who controlled the process overreached. “This constitution is extremely partisan,” he said.

Mr. Lagos declined to say how he would vote, suggesting instead that he may cast an empty ballot.

The 170-page text would make the Chilean state, which has long had a limited role in its citizens’ lives, the guarantor of more than 100 rights, more than any other national constitution in the world, according to an analysis by the Comparative Constitutions Project, a global survey of constitutions run by Mr. Elkins and Tom Ginsburg, a law professor at the University of Chicago.

Those rights range from the profound to the mundane to the peculiar.

In addition to housing, health care and education, the new constitution would enshrine the right to freedom of expression, religion and worldview. There would be the right to free time, physical activity, sex education, cybersecurity, the protection of personal data and “free and full legal advice” for anyone “who cannot obtain it.”

Chileans would have the right to “adequate, healthy, sufficient, nutritionally complete and culturally relevant food”; the right to develop their “personality, identity and life projects”; and the right to “live in safe and violence-free environments,” to “age with dignity” and to die “a dignified death.”

Chileans would also have “sexual and reproductive rights,” including that women could have “a voluntary interruption of their pregnancy,” language that would enshrine the right to an abortion more explicitly than any other national constitution, Mr. Ginsburg said.

It would be a momentous shift for Chile, which banned all forms of abortion until 2017, when it legalized the procedure only in cases of rape, an unviable fetus or a threat to the mother’s life.

One of the constitution’s clearest immediate changes would be a mandate that women hold at least 50 percent of many government positions, the first such requirement in any constitution, Mr. Ginsburg said.

The most contentious proposal is defining Chile as a “plurinational” state, meaning that 11 separate Indigenous groups, which account for nearly 13 percent of the population, could be recognized as their own nations, with their own governing structures and court systems. That would represent some of the most expansive rights for Indigenous people anywhere, according to experts.

The constitution also states explicitly that “nature has rights” and “the state and society have the duty to protect and respect them.” It also orders the state to protect animals, “recognizing their sentience and their right to live a life free from mistreatment.”

Constitutional law experts said that such provisions are probably intended to push Chile’s Congress to adopt environmental protection laws, but that they could also allow lawyers to file lawsuits on behalf of a forest or a threatened species.

Chilean economists estimate that implementing the new constitution would cost the government 9 percent to 14 percent of Chile’s gross domestic product of $317 billion. “That’s the cost of satisfying the basic needs of the Chilean men and women: that they get a good education, they have access to health care, a decent pension and a home,” said Alvaro García, Chile’s former economic minister.

The constitution would also reshape the government by eliminating the Senate, strengthening regional governments and allowing Chilean presidents to run for a second consecutive term.

Chile’s proposed constitution is so bold and unconventional in large part because it was drafted by many political outsiders who were allowed to run for the constitutional convention that drafted the document.

Fresh off protests against the political establishment, Chileans voted for independents to fill more than half the 155 seats, electing lawyers, academics, journalists, two actors, a dentist, a mechanic, a chess master and a bevy of left-wing activists, including one who became famous for protesting in a Pikachu costume. Seventeen seats also went to Indigenous people.

Leftists won more than two-thirds of the convention’s seats, putting them in full control of the process since a two-thirds majority was necessary to add measures.

The motley crew deciding Chile’s future drew unwanted attention at times. There was the woman who gave a speech bare-chested and the man who left his camera on while showering during a remote vote. Many voters felt that the convention was not taking the process seriously.

In recent months, Chileans have been bombarded with marketing from the “apruebo” and “rechazo” campaigns, some of it misleading, including claims that the constitution would allow abortion in the ninth month of pregnancy and ban homeownership.

On Thursday night, each side held closing rallies. Hundreds of thousands of “apruebo” supporters packed downtown Santiago and watched concerts by famous Chilean music acts, from rap to Andean folk.

“I’ve already lived, but I want deep change for the children of Chile,” said María Veloso, 57, who runs a food stand.

In a wealthier part of town, in a hillside amphitheater named after the Chilean poet Pablo Neruda, a much smaller crowd gathered to mark their campaign to reject the leftist text. (Mr. Neruda, ironically, was a communist.) Hundreds of people waved Chilean flags and danced to an act impersonating the flamboyant Mexican singer Juan Gabriel.

Regardless of the vote’s outcome, there is more political negotiating ahead. In the case of approval, Chile’s Congress, which is ideologically split, will be tasked with figuring out how to implement many of the changes. Lawmakers could try to significantly limit the scope or impact of some policies, such as abortion or Indigenous rights, by passing laws interpreting the constitution’s language in a narrow way.

Ultimately, the real effect of many provisions would probably be determined by the courts.

If the text is rejected, Mr. Boric, Chile’s president, has said that he would like to see a new convention draft another proposed charter.

He would, in other words, like to try it all again.