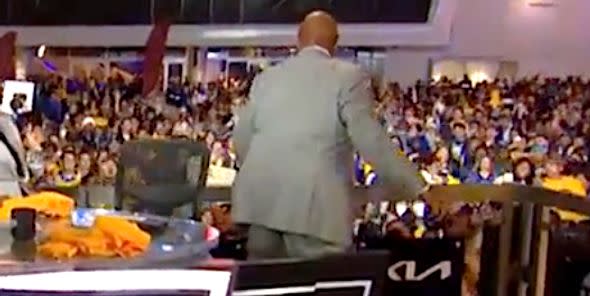 Golden State Warriors fans overstepped Thursday in their diss war with TNT commentator Charles Barkley, throwing a T-shirt and another object at him after their team clinched a berth in the NBA Finals. (Watch the video below.)

The “Inside the NBA” crew was set up outside San Francisco’s Chase Center when Barkley was hit from behind by the shirt. Another item also flew at him from the mob, footage showed.

Barkley stood and threatened to throw his coffee cup at the crowd, prompting TNT colleagues Kenny Smith and Ernie Johnson to basically tell Barkley to cool it.

Barkley returned to his chair and Johnson cut to a commercial.

During the Warriors’ 4-games-to-1 Western Conference Finals series triumph over the Dallas Mavericks, Barkley playfully (we think) antagonized the Golden State faithful. He called the fans obnoxious, and said he hated them and wanted them to suffer in defeat. At one point in reply to their taunts, he grumbled that they sucked. He also riffed on the city’s “dirty-ass streets.”

Throwing stuff and other forms of assault, however, are inexcusable escalations.

Barkley appeared to crack a smile during the clash, but it was just one mug away from turning really ugly.