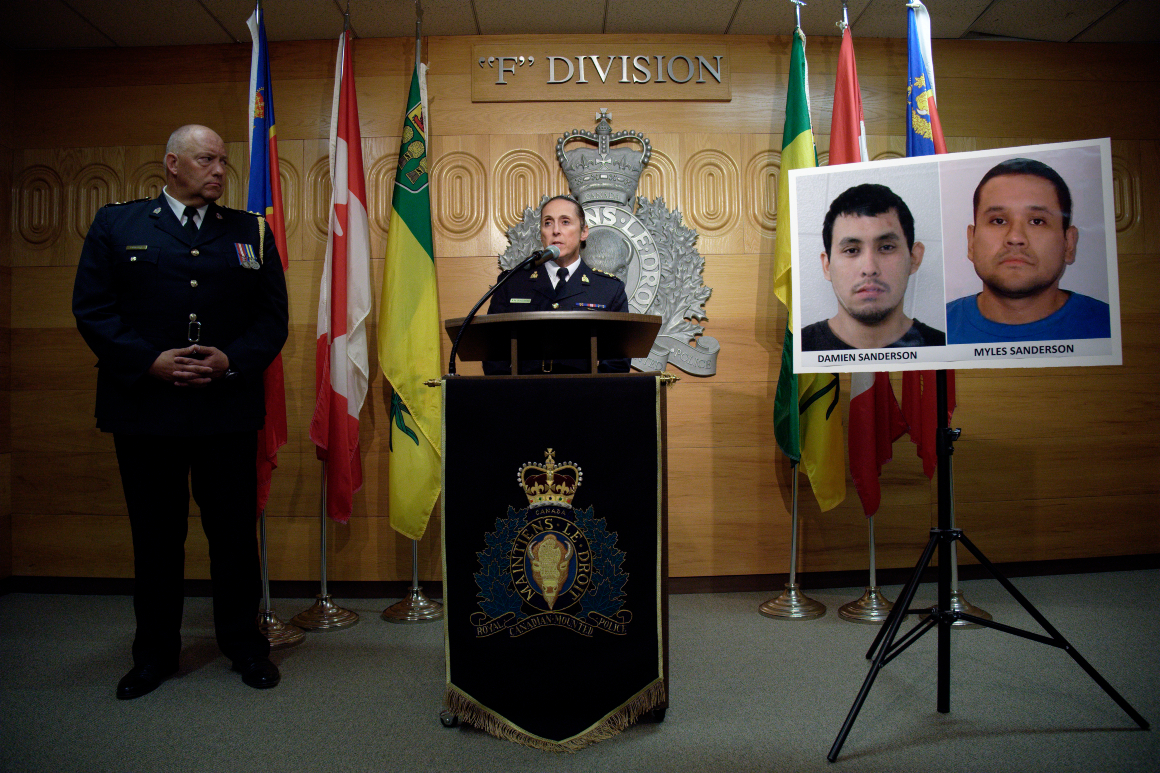 “It is horrific what has occurred in our province today,” Blackmore said.

She said there are 13 crime scenes where either deceased or injured people were found. She urged the suspects to turn themselves in.

Police said the last information they had from the public was that the suspects were sighted in Saskatchewan’s capital of Regina around lunchtime. There have been so sightings since.

“If in the Regina area, take precautions & consider sheltering in place. Do not leave a secure location. DO NOT APPROACH suspicious persons. Do not pick up hitch hikers. Report suspicious persons, emergencies or info to 9-1-1. Do not disclose police locations,” the RCMP said in a message on Twitter.

Weldon resident Diane Shier said she was in her garden Sunday morning when she noticed emergency crews a couple of blocks away.

Shier said her neighbor, a man who lived with his grandson, was killed. She did not want to identify the victim out of respect for his family.

“I am very upset because I lost a good neighbor,” she said.

The search for suspects was carried out as fans descended in Regina for a sold out annual Labor Day game between the Canadian Football League’s Saskatchewan Roughriders and Winnipeg Blue Bombers.

The Regina Police Service said in a news release that with the help of Mounties, it was working on several fronts to locate and arrest the suspects and had “deployed additional resources for public safety throughout the city, including the football game at Mosaic Stadium.″

The alert first issued by Melfort, Saskatchewan RCMP about 7 a.m. was extended hours later to cover Manitoba and Alberta, as the two suspects remained at large.

Damien Sanderson, 31, was described as five feet seven inches tall and 155 pounds, and Myles Sanderson, 30, as six-foot-one and 200 pounds. Both have black hair and brown eyes and may be driving a black Nissan Rogue.

The Saskatchewan Health Authority said multiple patients were being treated at several sites.

“A call for additional staff was issued to respond to the influx of casualties,” authority spokesperson Anne Linemann said in an email.

Mark Oddan, a spokesperson with STARS Air Ambulance, said two helicopters were dispatched from Saskatoon and another from Regina.

Oddan said due to privacy laws, he could not disclose information about their ages, genders or conditions.