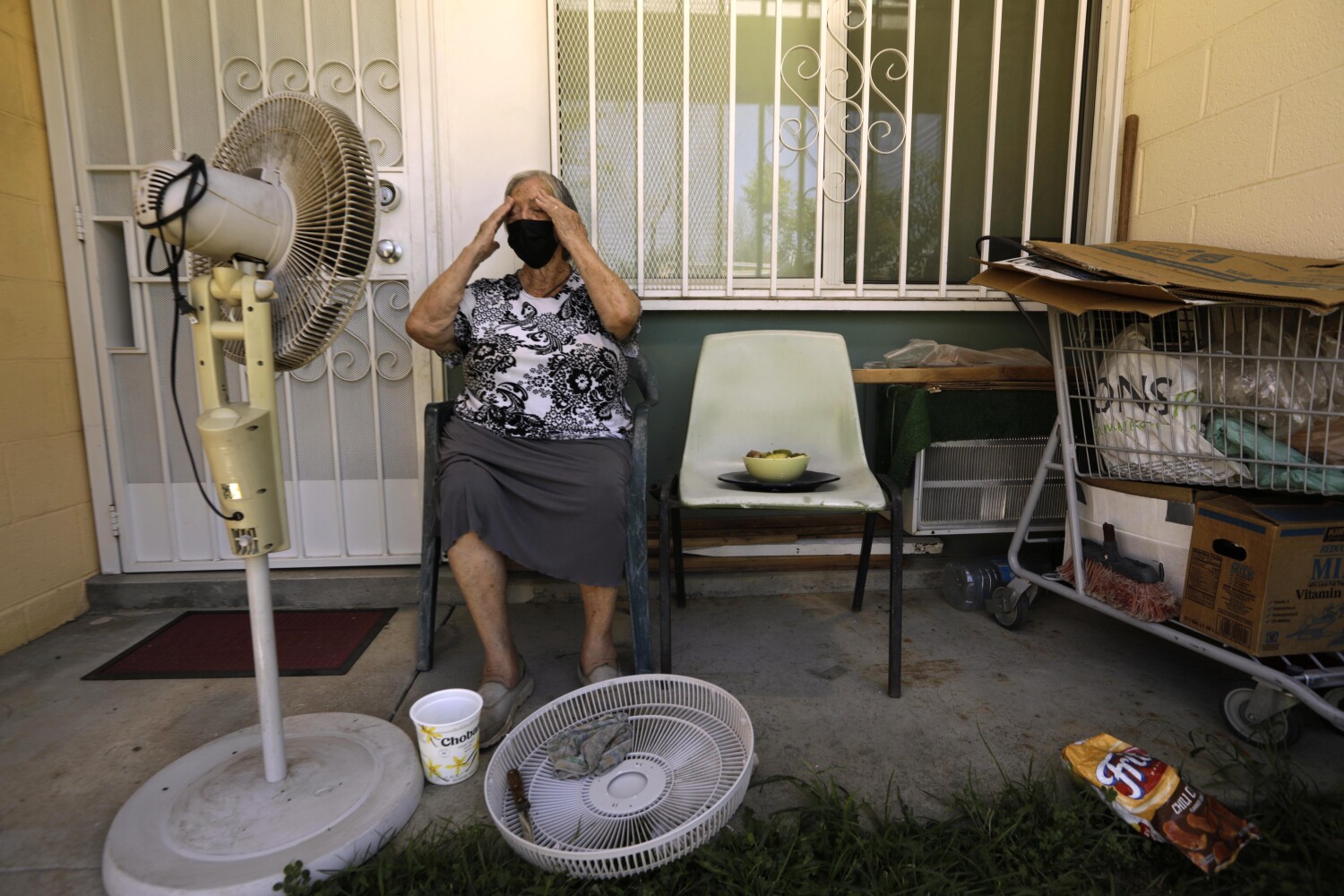 Just two months before California would face its most severe heat wave of the year, Marta Segura was named Los Angeles’ inaugural chief heat officer and given the monumental task of improving the city’s preparation and response to the growing threat of extreme temperatures.

The move was a historic one — only two other U.S. cities, Miami and Phoenix, have officials who are devoted to the crisis of rising temperatures. Already, officials say, Segura has championed better coordination, communication and urgency surrounding the city’s heat policies and resources.

But Segura acknowledges the improvements are only initial steps toward the profound changes necessary to mitigate the effects of dangerous heat events, which have only become more frequent and more lethal in recent years because of climate change.

Segura is working to finalize the city’s Heat Action Plan, which she said will focus on investments in further green infrastructure, strategies to reduce systems that exacerbate urban heat and grass-roots input to target neighborhoods most at risk from the harm of extreme heat.

Some worry that with Segura’s limited staff and budget — she has just two full-time employees and $1 million in allocated funds — her ability to implement those larger changes may be limited. They also note that her heat officer role comes on top of her other full-time position as the city’s climate emergency mobilization director.

The current heat wave is a test of promises made by both local and state officials to better protect the vulnerable from heat-related illnesses and improve what critics have called California’s insufficient investment in heat-related safety programs. Though some progress has been made, there have also been setbacks, including some proposed state legislation that has stalled. Other more concrete steps are expected to take years.

Forecasters and officials have warned of oppressive temperatures through the Labor Day weekend, with days expected to be 10 to 20 degrees above average in some areas and little relief at night.

Californians have been under daily Flex Alerts since Wednesday, and numerous firefighters have suffered heat injuries while battling a brushfire in Castaic. Gov. Gavin Newsom has declared a state of emergency to buoy energy supplies and avoid rolling blackouts. Such power shut-offs can have dangerous and potentially deadly consequences during periods of extreme heat.

A Times investigation published last year revealed that California has done a poor job of tracking the number of people who have died because of extreme heat, and has largely failed to provide adequate resources to communities most at risk.

Jonathan Parfrey, executive director of the nonprofit, Climate Resolve, has been a vocal advocate for state and local leaders to substantially change how they address extreme heat. He’s seen little improvement, despite repeated warnings.

“There is a massive failure on the part of public officials to adequately respond to the extreme heat events fueled by climate change,” Parfrey said.

A report last year by the UCLA Luskin Center for Innovation found significant gaps in California’s policies confronting the extreme heat crisis and called for a more coordinated approach.

The state has made progress in confronting extreme heat, such as the 2021 budget infusion that focused on addressing the problem, said Colleen Callahan, co-executive director at the Luskin Center. That funding is now estimated at $865 million.

But even though lawmakers kicked off this year with a package of proposed heat-related bills, only a handful of them reached the governor’s desk. They included a measure that would establish a statewide warning system for extreme heat events by 2025, similar to warnings that are issued for wildfires and hurricanes. If signed into law, it will be of the nation’s first heat-ranking systems.

Other wins this legislative session include a bill that requires the revision of the heat illness standard for outdoor workers laboring in temperatures above 105 degrees and allocating $10 million to the Department of Health to establish the real-time data monitoring of heat-related illnesses during heat waves.

In April, the state released an Extreme Heat Action Plan laying out protections for Californians from the dangers of extreme heat. Recommendations included greening school yards; increasing the number of cooling centers; better coordination and targeting of public messaging, particularly with underserved communities; and planting more trees in urban areas that lack their cooling shade.

That plan was an updated version of a 2013 strategy that included more than 40 proposals to prepare for the extreme heat crisis, the majority of which weren’t implemented, in part because of funding issues, officials told The Times. The updated Extreme Heat Action Plan has $365 million set aside from last year’s budget to carry out its proposals.

Unlike Los Angeles, the state doesn’t have a chief heat officer to advocate for and coordinate the crisis response. A plan that would have created that position failed in the Legislature for the second year in a row. Experts working on extreme heat policy say that is critical to the state’s goals against extreme heat.

“I think right now, there’s this feeling that something like extreme heat can be embedded in other policies,” said V. Kelly Turner, co-director of the Luskin Center for Innovation. More work needs to be done, experts say, and there needs to be an official role coordinating those efforts.

In Los Angeles, Segura said she is working to transform the city’s planning and messaging on extreme heat. She launched the #HeatRelief4LA campaign to raise awareness about the dangers of extreme temperatures and how to stay safe. Her office is partnering with local organizations to try to reach all Angelenos, she said.

And though Parfrey, the Climate Resolve leader, applauds forming a heat officer position in L.A., he said the reality of it falls short.

“We think that it’s a big, but insufficient, first step,” Parfrey said. Segura “already had an 80-hour-a-week job, and then they added this title onto her existing slate of activities.”

Segura said that although the additional role has been time-consuming, it was helpful having her background as the climate emergency mobilization director.

“I think since [extreme heat is] a climate hazard, it makes sense for the officer to be in the climate emergency mobilization office,” Segura said. “But I didn’t realize I was going to be the chief.”

Despite her small budget and team, Segura has partnered with other agencies to update and expand the county-wide map of air-conditioned facilities open to residents during extreme heat.

Her latest project is a city-specific “cool spot” map marking cooling centers, as well as hydration stations, shaded areas and other available shelters.

Krekorian said he’s been most excited by the “tremendous coordination” between Segura and other city departments to better prepare for this heat wave and plan for future heat mitigation.

But both Krekorian and Segura agree there’s still a lot left to do. Krekorian wants to see cooling centers expanded beyond libraries and recreation centers and utilize more natural community hubs, such as places of worship or local businesses.

Parfrey agreed there needs to be better options for those in need of relief during extreme heat. He called the cooling center system “woefully inadequate” and said that facilities are often under-utilized.

Segura said the city also needs much more green and blue infrastructure, which she described as vegetation and shade trees, and hydration stations or shade structures. And though the city has access to highly accurate and detailed mapping technology to understand which communities are hardest-hit during periods of extreme heat, L.A. still doesn’t have a real plan for how to best target and respond to these neighborhoods, whose residents tend to be low-income people of color

Segura said her office is working on improving communication mechanisms to reach those “frontline communities.” The need for L.A. and the state to better respond to extreme heat was urgent, she said, especially for those who are most susceptible.

“It’s not out of morality or charity or anything like that,” Segura said. “It’s because if we don’t serve the most vulnerable frontline communities and invest in them, then we’re not going to get to the climate solution for anyone.”