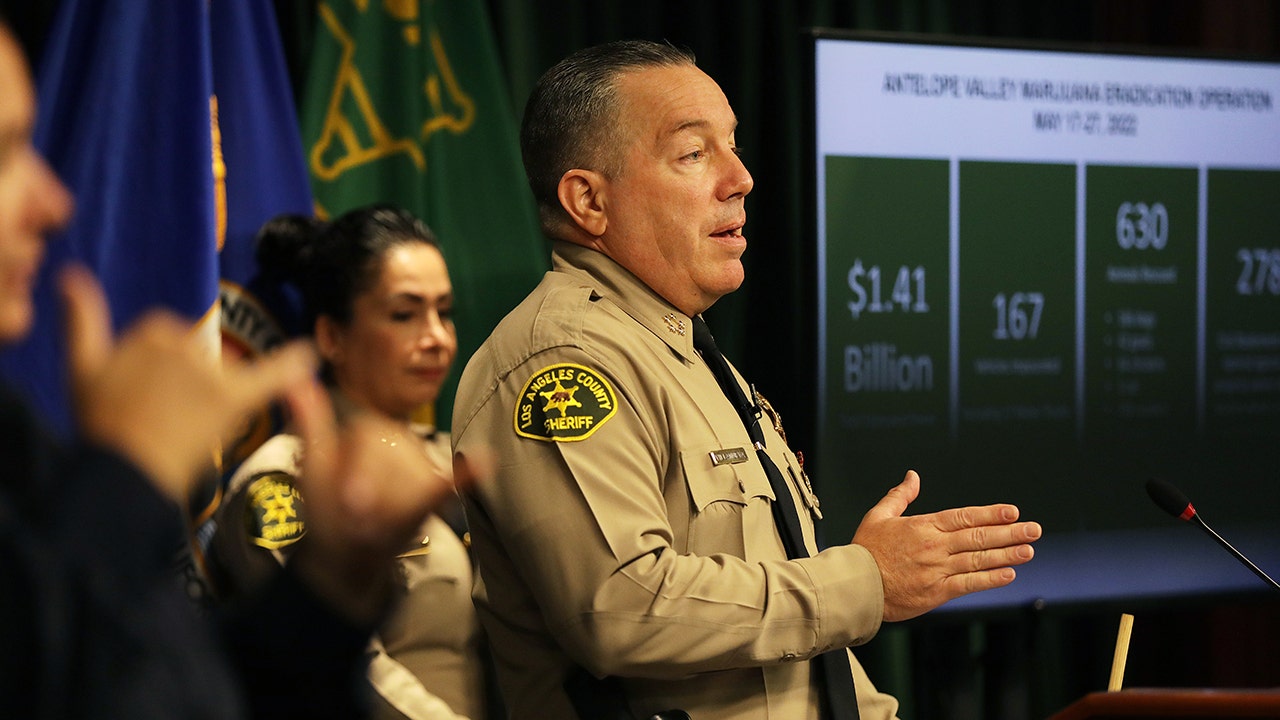 Los Angeles County Sheriff Alex Villanueva, who defied police defunders and vaccine mandates, survived Tuesday’s primary but will have to head to the primary in November to defend his re-election.

The Associated Press reported that Villanueva won 34% of the vote – shy of the 50% margin required for the incumbent sheriff to avoid a runoff election. Coming in second Tuesday was former Long Beach police Chief Robert Luna with 25%, placing the two far ahead in the nine-candidate field.

Unlike most running, Luna does not have any previous ties to the Los Angeles Sheriff’s Department.

Los Angeles County Sheriff Alex Villanueva speaks during a news conference at the Hall of Justice in downtown Los Angeles to announce the results of a recent marijuana eradication operation in the Antelope Valley.
((Christina House / Los Angeles Times via Getty Images))

Villanueva, who has described himself as one of the last remaining Democrats of the JFK and FDR vein, was elected in 2018, but since 2020 has consistently clashed with the Los Angeles County Board of Supervisors, most notably as he refused to enforce the county’s vaccine mandate that he argued would lead to the firing of 4,000 of his deputies amid a crime wave ushered in by the defund police movement.

Then Long Beach Police Chief Robert Luna speaks to members of the media as he provided an update on efforts to reduce gun violence on Friday, July 2, 2021.
((Photo by Brittany Murray/MediaNews Group/Long Beach Press-Telegram via Getty Images))

“Every single thing I campaigned on, I accomplished,” Villanueva told KABC-TV ahead of Tuesday’s primary. “So, them trying to paint me somehow as a born-again conservative, the facts don’t bear out. I’m going to do things based on what’s right for public safety outside of partisan labels.”

The board, which Villanueva noted endorsed embattled progressive Los Angeles District Attorney George Gascon, usurped the sheriff’s power to enforce the COVID-19 mandate for his department’s employees earlier this year.

Despite fighting the Inspector General’s subpoena for months, Villanueva was also ordered to testify in April about alleged gang-like groups of deputies.

The Board of Supervisors oversees the sheriff’s department’s current $3.5 billion budget.

“In law enforcement, people are supposed to look at us at the people who not only enforce the law, but we listen and cooperate with for example, oversight, subpoenas,” Luna told KABC ahead of the primary.

“If I get subpoenaed, I need to comply with that, just like every community member in L.A. County does, and for some reason, [Villanueva] stands up there and thinks he’s beyond the law,” Luna said. “This is not about us as individuals. It is about the people we serve, and we have to come up with solutions. We have to problem solve and at the end of the day, what kind of person fights and calls people names to the same individuals who control your budget?”

Danielle Wallace is a reporter for Fox News Digital covering politics, crime, police and more. Story tips can be sent to danielle[email protected] and on Twitter: @danimwallace.