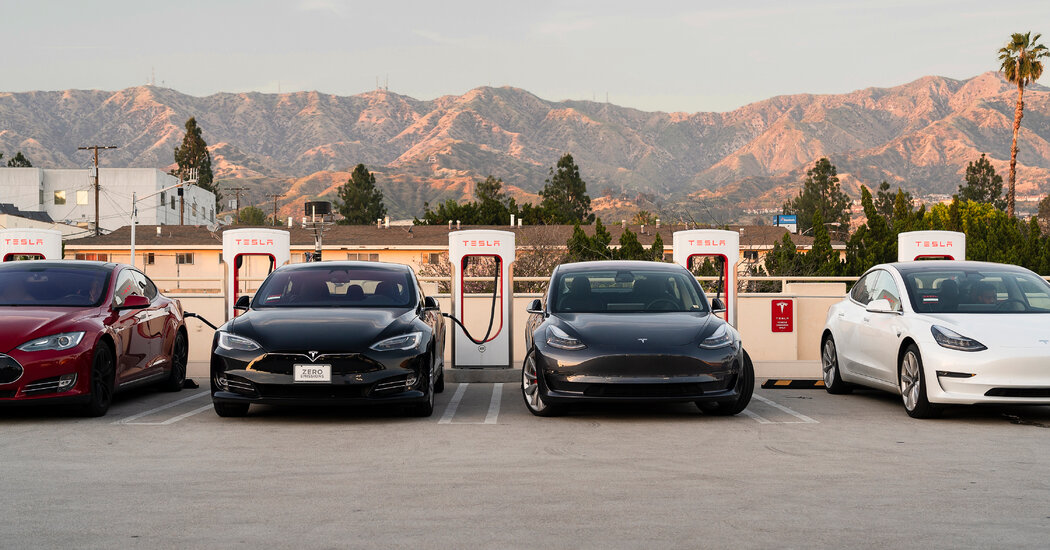 For years, as California has moved ahead with ambitious clean-air regulations, the state has had to prod the auto industry to go along. Now, in the push to electrify the nation’s car fleet, it is California that is keeping up with automakers.

Even before state regulators acted Thursday to ban sales of new internal-combustion vehicles by 2035, Detroit’s Big 3 and their international rivals were setting increasingly aggressive targets for exclusively electric product lines.

But while the goals of automakers and regulators are aligned, mass production of affordable electric cars — which requires reconceiving the supply chains and engineering developed for internal-combustion vehicles — will not be easy.

The automakers are hurrying to close deals with mining companies and other suppliers that can meet the escalating demand for battery materials. Some are teaming up with smaller companies to expedite the build-out of a nationwide charging network. And they are breaking up their own corporate structures and refashioning them to ensure that the electric vehicle transition is not held back by the conventions of making gasoline-powered products.

“To move everything to E.V.s in California doesn’t seem outlandish and unattainable right now,” said Jessica Caldwell, executive director of insights at Edmunds, an auto-market researcher. “But I’m sure each automaker will face challenges to achieve their targets, and a few may even struggle a bit.”

The 2035 mandate, adopted by the California Air Resources Board, adds to momentum for electric cars already coming from the federal government. The climate and energy package signed by President Biden this month expands tax credits available to electric-vehicle buyers, but includes made-in-America requirements for E.V. components that many manufacturers will have trouble achieving.

Daniel Sperling, a member of the California board, said he expected pushback on the regulatory change from those with different ideological views. But he said it was a crucial step in reducing carbon emissions and stemming global warming.

“This is the most important and most transformative action that CARB has ever taken,” he said. “This is good not just for the environment but for the economy.”

On the way to its ultimate goal, the California rule requires that 35 percent of new passenger vehicles sold by 2026 — and 68 percent by 2030 — produce no carbon emissions.

Including hybrids, more than one million electric vehicles have been sold in California, according to the state’s Energy Commission. About 15 percent of new cars sold there in the first half of this year were electric models, up from 9.5 percent in 2021, the California New Car Dealers Association reported.

But the state’s standards are crucial not just because of its big population. To address its longstanding air-quality problems, California is permitted by law to set tougher environmental standards for automobiles than federal regulations establish. More than a dozen states usually follow its lead, adding up to a third of the U.S. auto market. And automakers want to conform to a single playbook.

Anticipating new regulations and determined to both create and meet consumer demand, big automakers have established their own timelines for a complete shift to E.V.s. Ford Motor has said it wants electric vehicles to make up 40 percent of its sales by 2030 and aims to make two million E.V.s a year by 2026. Volkswagen plans to stop selling gasoline vehicles in Europe between 2033 and 2035, and its Audi division intends to introduce only electric models starting in 2026.

Those automakers and many others are spending tens of billions of dollars to produce dozens of electric models and build plants to assemble them and the battery packs they will need. G.M. just started production at a battery plant in Ohio and has two others under construction in Tennessee and Michigan. Ford is selling an electric version of its F-150 pickup, an electric Mustang sport utility vehicle and an electric delivery van, and is the second-largest seller of E.V.s in the United States, after Tesla.

Ford has also reorganized, splitting its automotive operations into one division that focuses on electric vehicles and rapid growth, and another that will develop gasoline models and aim to reduce costs and maximize profit as sales slow and eventually begin to fall. The company said this week that it was eliminating 3,000 white-collar jobs as a way of “redeploying resources and addressing our cost structure.”

Volkswagen started producing an electric S.U.V. at an existing plant in Chattanooga, Tenn., in July. The company is also trying to stake out supplies of raw materials. This week, Volkswagen and Mercedes-Benz announced agreements with the Canadian government to get access to lithium, nickel and other crucial metals and minerals used in batteries. Canada has abundant reserves of these materials, though most mines are still in the development stage.

One reason automakers are embracing rather than resisting the transition is that consumers have shown an appetite for electric models. In the first half of the year, more than 370,000 fully electric vehicles were sold in the United States, up 76 percent from the year before, according to Cox Automotive.

Moreover, manufacturers believe that E.V. sales will continue to accelerate and exceed sales of gasoline-powered cars and trucks before long. Ford says it has more than 200,000 reservations for the electric F-150 Lightning pickup. G.M. said it had 150,000 for an electric Chevrolet Silverado, a truck that doesn’t go into production until next year.

One key to the adoption of electric vehicles is making them affordable. The models on the market tend to be considerably pricier than comparable gasoline models. Tesla’s Model Y compact lists for more than $46,000 before any options are added. Ford’s Mustang Mach-E S.U.V. starts at just under $44,000, about $15,000 more than a similarly sized Escape.

Automakers are working on reducing costs as production ramps up. G.M.’s new battery plant in Ohio is assembling a modular battery pack that can be used for almost any electric car or truck. The company is counting on this design to create economies of scale that will enable it to price E.V.s in a range that many more consumers can manage.

“When you look at bringing everyone along in the transition to E.V.s, you’ve got to provide entry models into that space,” G.M.’s chief executive, Mary T. Barra, said in an interview this year.

The cost and availability of critical metals and other minerals used in batteries, such as lithium, cobalt and nickel, remain a concern, though. A steep rise in E.V. production could push up prices of raw materials and cause shortages.

G.M. and Ford recently struck deals with mining companies to purchase lithium and other battery materials. Ford has also decided to use two types of batteries, requiring different materials, and reached an agreement to buy battery packs from a Chinese company, CATL, the world’s largest producer.

G.M. has said it has secured access to all the battery raw materials it needs to produce one million E.V.s in North America in 2025, and Ford says it has deals to provide 70 percent of the batteries it will need to make two million E.V.s a year by the end of 2026.

But how those companies and other automakers will obtain enough materials for an all-electric lineup remains unclear.

Another concern is the availability of charging stations. In most states, stations are few and far between, and vast parts of rural areas have none at all. Home charging stations can reduce the need for commercial chargers, but they can cost an E.V. owner $1,000 or more.

Tesla has built its own network of charging stations, although it must continue to expand it as it sells more cars. G.M., Ford and other automakers are working with companies including EVgo and Electrify America to develop charging networks. California’s network is the densest in the United States, but electric vehicle owners still complain about long waits to recharge.