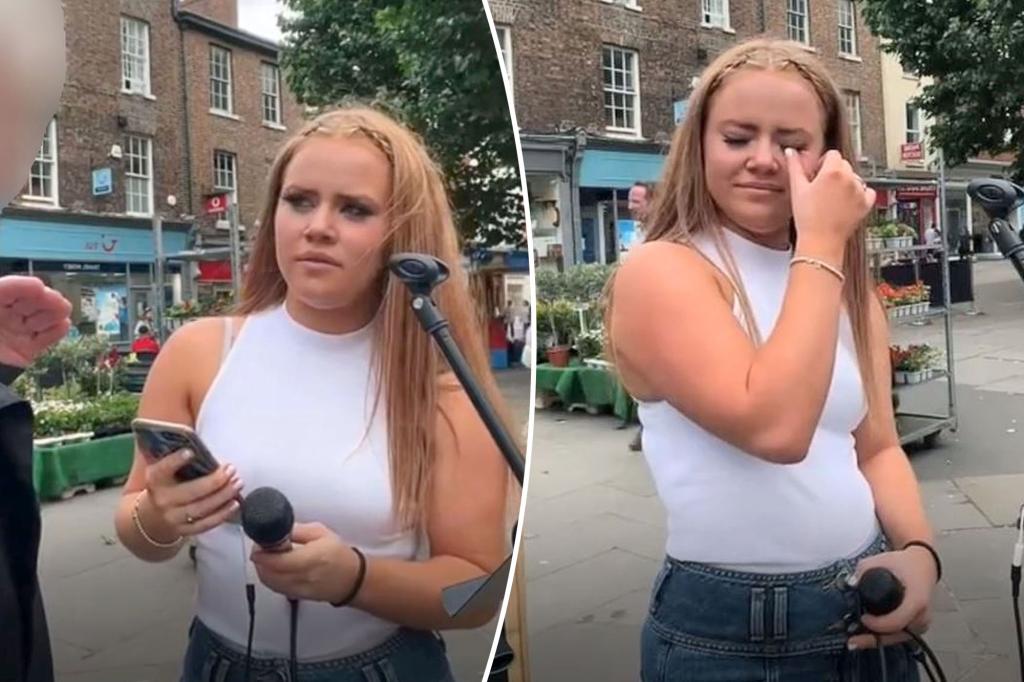 A heckler reduced a young busker to tears after he cruelly critiqued her vocal skills, saying: “Some people have it… you don’t.”

The incident occurred earlier this month in the British city of York, where aspiring songstress Mia Kirkland, 18, had set up to perform for pedestrians.

“Most of the time people aren’t mean but even when it’s that one time it gets you all worried, it makes you anxious and on edge,” the shaken teen told Kennedy News and Media.

Kirkland was live-streaming her busking session on TikTok when the heckler approached, with the entire ordeal captured on camera. The clip has subsequently gone viral, clocking up more than 3 million views.

In the video, the blond Brit can be seen taking a break after belting out Lady Gaga as the elderly male heckler walks up.

“There are some people who have it…you don’t. You need to add variations, you’re on the same plane all the time,” the man can be heard saying to a crushed Kirkland.

The teen tries to move away from the man, but he continues his critique and claims he once worked with Motown legend Diana Ross.

The footage shows the heckler eventually walking off before Kirkland is comforted by her mom, who was watching on.

But the harsh words were too much for the wannabe crooner to take, as she was seen sobbing and wiping a tear from her eye.

However, the plucky performer wasn’t going to let the heckler stop her, and she later returned to the square to sing another song.

“It was only earlier that I’d had flowers and loads of kind words, but it’s hard not to let people like that ruin your day,” Kirkland stated. “It’s just a bit presumptuous of him to think that he could get away with it because I’m a young woman on my own.”

Kirkland — who will begin studying at the London Centre of Contemporary Music next year — also told Kennedy News that she doesn’t believe the man ever worked with Diana Ross.

“I don’t think there’s any truth in him saying he worked her,” she declared. “If he did he wouldn’t come up to me and say something like that. Lots of people have said the closest he’s probably got to her is listening to her in the shower.”

The singer said the cruel critic wasn’t the first heckler she’s had while busking, stating: “I’ve had so many experiences of people being weird with me — I had to report a woman to the police for sending me hate mail.”

“When I started I didn’t think busking would be like that at all,” she added. “But now that I’ve been doing it quite a while, every time I go out I have to prepare myself for someone who doesn’t enjoy it coming up to me.”

Still, the “shy” singer says the heckler has messed with her confidence — but has been heartened by the positive feedback she’s received both on TikTok and in real life.

“I’ve only been busking once after it and I was so nervous about coming across him again or someone else saying something, but it was so lovely,” Kirkland enthused.

“I am not a confident person at all, but ever since this happened and the positive response I’ve had from lots of people has made me think, ‘People like me, that’s good!’”