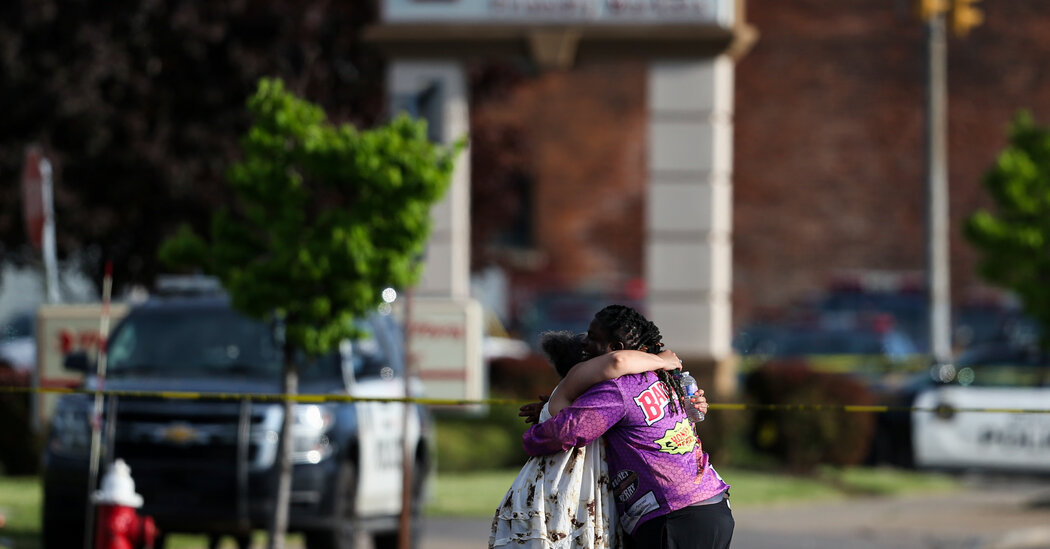 Dominique Calhoun had pulled into the parking lot of a Tops supermarket, about to treat her two daughters to ice cream, when she suddenly saw people running out of the store screaming.

By the time she had exited, 13 people had been shot, 10 of them fatally, after an 18-year-old white gunman opened fire in what has been described by police as a racist attack.

“That literally could’ve been me,” Ms. Calhoun said. “I’m just in shock. I’ve never had something like this happen so close to home.”

Ken Stephens, 68, a member of a local anti-violence group, described a grisly scene. “I came up here, and bodies were everywhere,” he said.

News of the shooting spread quickly across the city. Marilyn Hanson, 60, raced to Tops to make sure her daughter, who lived nearby, wasn’t among the victims; she was safe.

Both Ms. Hanson and her daughter shop at the store often.

“My daughter was so scared because that could’ve been me in that store,” Ms. Hanson said, adding: “If a Black man did this, he’d be dead, too,” referring to the fact that the shooter had surrendered and been taken into custody.

Daniel Love, 24, was inside his Love Barber Shop near the supermarket with his wife when he heard a noise, he said. His wife is from Iraq and immediately recognized the sound of gunfire. He told her to get down, he said. He eventually ran to the parking lot and saw the lifeless body of someone he knew.

Ulysees O. Wingo Sr., a member of the Buffalo Common Council who represents a district adjacent to the site of the shooting, said he also knew some victims. As he spoke, onlookers gathered at the site, with about 100 standing along a side street. Yellow police tape cordoned off the block surrounding the store, and at least two dozen police officers, along with several vehicles, guarded the perimeter.

Mr. Wingo said most of the shoppers at the Tops supermarket were Black, mirroring the surrounding neighborhood.

Dorothy Simmons, 64, typically spends part of her Saturdays at Tops, shopping for food to prepare for Sunday dinner. “That’s what we do in this community,” said Ms. Simmons, who has lived in East Buffalo all her life. On this Saturday, Ms. Simmons was at work in Amherst when she heard the news. She cried, she said. “This is our store — this is our store,” Ms. Simmons said.

Ms. Simmons, who is Black, said the fact that the gunman was able to surrender showed disparity.

“If that had been my son, it would have never been surrender. We never had a chance to surrender,” Ms. Simmons said. “It would never be that way.”