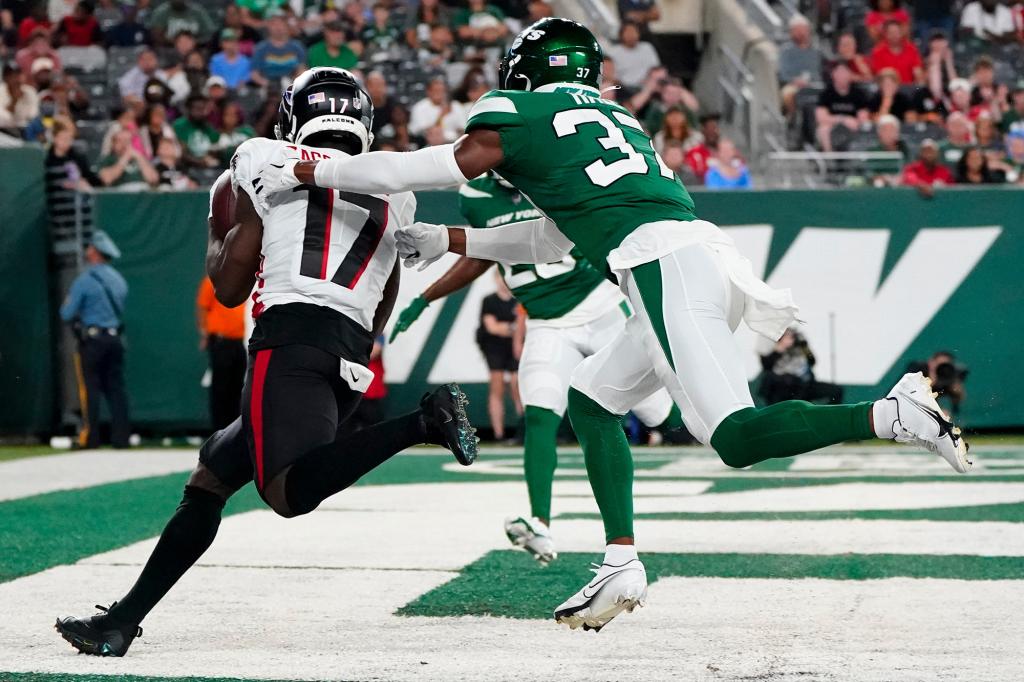 Bryce Hall, at least nominally, has been competing for a starting cornerback job for the past few weeks.

It’s fair to say, though, that competition is probably over after Monday night’s 24-16 Jets preseason victory to the Falcons at MetLife Stadium. If it wasn’t Hall’s play that gave that away, it was his mere presence on the field four drives into the game, when most of the starting defense was sitting. His play, though, didn’t help matters.

Hall was noticeable in all the wrong ways. He committed a penalty, got beat multiple times and missed a tackle, all in the span of a few drives. There wasn’t much to take from this game — even by preseason standards, it was a snoozer. But this put an end to any notion that there’s a serious competition between Sauce Gardner and Hall.

On the first drive of the game, Kyle Pitts badly beat Hall on a corner route, going 52 yards down the sideline to set the Falcons up for an eventual field goal. At least, though, that was against Pitts — the best player on an Atlanta offense that leaves a lot to be desired.

One drive later, Hall was complicit on two plays, failing to tackle KhaDarel Hodge on a short curl that eventually went for 13 yards as well as giving up a touchdown on a slant to Olamide Zaccheaus — a play on which Hall took a wrong step outside off the line and never recovered.

After that, Gardner — who had a quiet night, making one tackle — didn’t play the rest of the way. Hall still had another lowlight to go, committing a hold midway through the second quarter during a play where he still gave up a 12-yard catch to Damiere Byrd.

It always would have been surprising to see anyone but Gardner, on whom the Jets spent the No. 4 overall pick in the draft, lining up at corner in Week 1 against the Ravens. Now, it would be downright shocking.

Whether coach Robert Saleh declares the competition over or not, there is little to decide at this point. D.J. Reed, who didn’t play Monday, is a lock atop the depth chart at corner barring injury. And Gardner now looks like a clear-cut starter alongside him.

After Monday went as poorly as it did for Hall, the more relevant question might be whether he can keep the No. 3 job on the depth chart, for which Brandin Echols and Isaiah Dunn could challenge.

Hall started all 17 games for the Jets last season and acquitted himself well enough. But the writing was on the wall four months ago. Monday merely provided a visual confirmation.

“Bryce brings the same thing that he brought last year,” Saleh said early in training camp. “The guy is a relentless worker, he has gotten better in coverage obviously, he was really good last year, too, so he’s a pro’s pro. I love having him around and just his presence and the competitive nature he has is a bonus for anyone really.”

At this point, though, it seems that Hall will need to bring those qualities with less playing time.