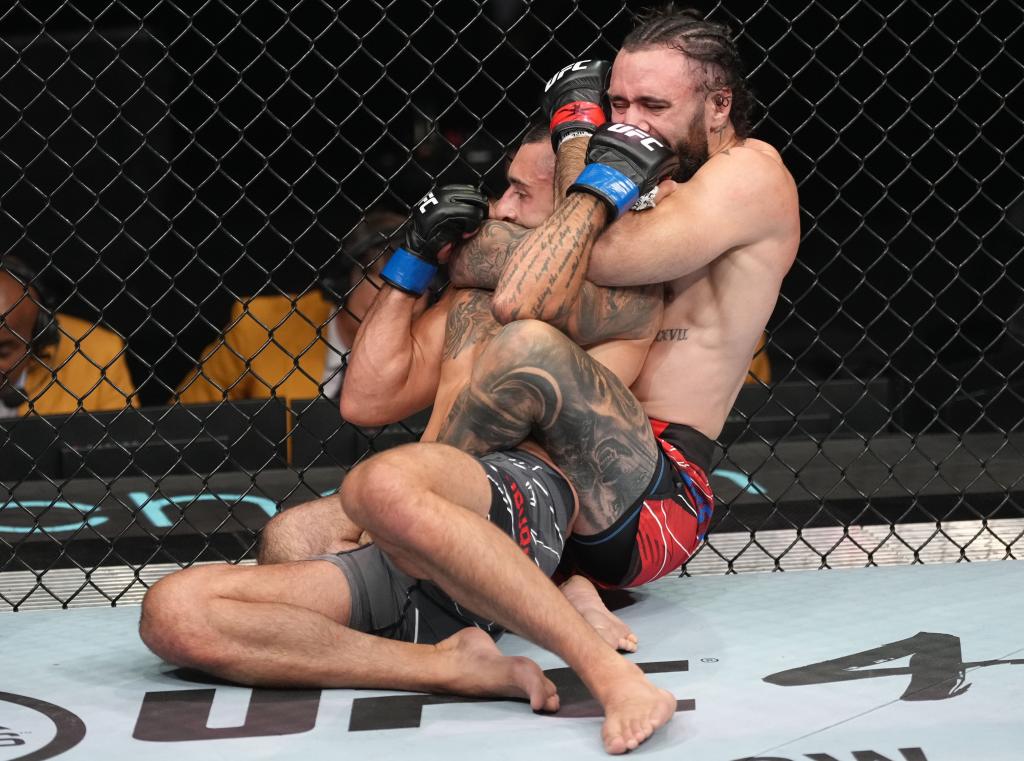 Shane Burgos’ record remains perfect in the Empire State. He can thank one hell of a chin for that.

The Bronx native, who expressed displeasure with his performance, nevertheless managed to hold on for a majority decision victory over Charles Jourdain on Saturday at UBS Arena in featherweight action during the UFC’s first Long Island event in five years. The win moved him to 7-0 in UFC bouts in his home state.

“I fought at [Madison Square Garden] three times, and that [UBS Arena crowd] was the best crowd,” Burgos, who moved to Monroe, N.Y., when he was in middle school, told reporters after the event ended. “That was wild. When they said my name, and every time I would go for the [rear-naked] choke and get it on his neck, the crowd would go crazy.”

Fans anticipated a clash of action-oriented strikers entering the main-card bout. But for two rounds, Burgos was a grappling beast and Jourdain simply couldn’t handle him. Burgos and his Tiger Schulmann’s MMA team anticipated that strategy would work.

“I knew he’d be a little bit tough on the feet, and he’s a lefty, so that always makes it a little bit interesting,” Burgos said in the octagon following the fight. “I knew I had an advantage on the ground.

In a nifty moment early on, Burgos pushed off the octagon to help secure Jourdain’s back and to attack a rear-naked choke from the body triangle in the highest spot of the first round. He took the back with a standing body triangle again the following round, keeping it longer this time.

The expected war on the feet broke out in the final round, but the battle was largely one-way traffic. Jourdain cracked Burgos often, besting the local favorite in significant strikes 84-26, per UFC Stats.

Burgos said the second body triangle tired him out in a way he had never previously experienced, in training or a fight, despite saying he wasn’t “squeezing.”

“This is just gonna be mental toughness and grit for these next five minutes,” Burgos recalled of his mindset before the third.

Lauren Murphy, an underdog to former bantamweight champion and crowd favorite Miesha Tate, battered the left side of the debuting flyweight’s face en route to an impressive victory by decision.

Murphy, competing for the first time since falling by TKO to champion Valentina Shevchenko in September, had revealed midweek that she was suffering from the effects of Clostridioides difficile, a bacterial infection of the large intestine, in the weeks leading up to the title fight.

After a slower opening frame, Murphy’s shots swelled up Tate’s left cheekbone, which appeared to impact her field of view for the rest of the bout. The Long Island crowd, vociferously cheering on Tate at the start, belted out chants for “Mur-phy” by the final frame.

Matt Schnell pulled off a wild comeback to pick up a submission finish against Su Mudaerji via second-round triangle after, as Schnell suggested in the octagon afterward, his opponent “got tired from beating on me.”

In the prelims, Dwight Grant, a middleweight raised in Brooklyn, dropped a decision to Dustin Stoltzfus after the Pennsylvania native took control of the final two rounds with his superior grappling.