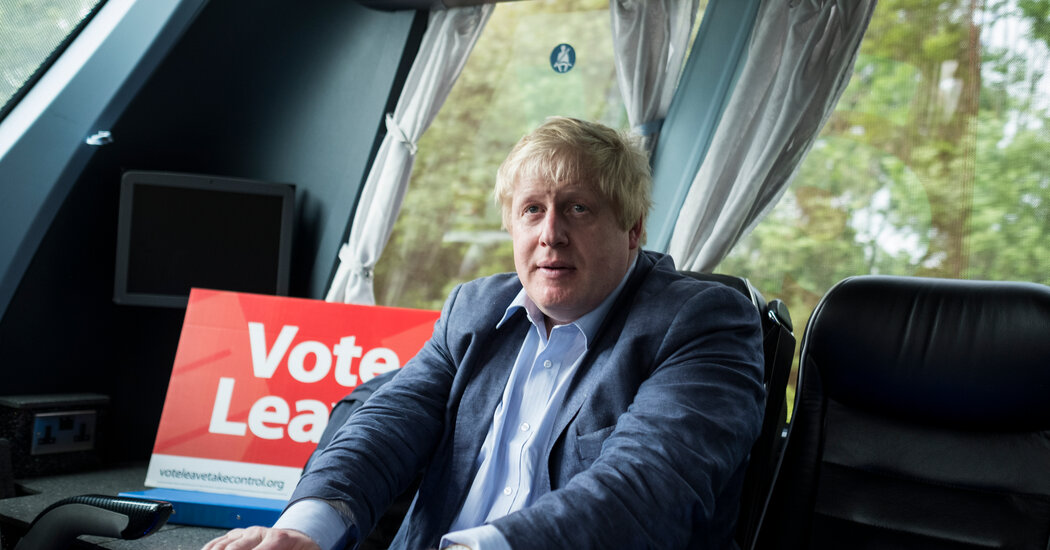 LONDON — The swift, stinging downfall of Boris Johnson this past week removes a uniquely polarizing figure from British politics. But it does not remove the divisive issues that Mr. Johnson confronted — and in many cases, exploited — as he engineered Britain’s departure from the European Union two and a half years ago.

Mr. Johnson’s legacy, and that of Brexit, are inseparable. Britons will be wrestling with the fallout from his signature project long after their flamboyant prime minister decamps Downing Street, taking with him his heedless disregard for the rules, checkered ethical history and slapdash personal style.

From Britain’s poisoned relationship with France to its clash with Brussels over trade in Northern Ireland, Brexit-related issues will loom large in the campaign to replace Mr. Johnson as leader of the Conservative Party and, hence, prime minister. They could well define the next occupant of Downing Street, the fourth prime minister since Britain voted to leave in 2016.

Narrowing the divide between Britain’s wealthy south and poorer north — Mr. Johnson’s marquee post-Brexit initiative — is major unfinished business. Even broader economic problems, like surging inflation and a looming recession, have a Brexit component, insofar as Britain’s divorce from Brussels has aggravated its woes.

Beyond that, Mr. Johnson’s successor will have to reckon with the corrosive effect that Brexit has had on British politics, whether in the charged debates over social and cultural issues, or in the strains on institutions like Parliament and the Civil Service. Mr. Johnson, with his populist instincts, stoked those sentiments. Throwing out his playbook would not be easy for any future Conservative leader.

“What Boris Johnson did was show how the system can be exploited,” said Anand Menon, a professor of European politics at King’s College London. “Given the nature of the Conservative Party, I assume there’s not going to be much softening of its position on many of these issues.”

Even Jeremy Hunt, a middle-of-the-road figure who is likely to run for party leader, said recently he would favor ripping up parts of Britain’s agreement with the European Union that sets trade regulations in Northern Ireland. Mr. Johnson’s threat to do that provoked outrage in Brussels, which accused him of violating international law.

Mr. Hunt, who challenged Mr. Johnson for the leadership unsuccessfully in 2019, voted for Britain to stay in the European Union. But like Mr. Johnson, his fortunes will depend in part on support from the Conservative Party’s right flank, which pushed relentlessly for the most uncompromising form of Brexit.

Another likely candidate, Liz Truss, Mr. Johnson’s foreign secretary, is spearheading the aggressive approach on Northern Ireland. She is reported to have recruited an influential group of Brexiteers to vet legislation that would allow Britain to renege on parts of the agreement with Brussels before introducing it in Parliament.

The Fall of Boris Johnson, Explained

Turmoil at Downing Street. Britain’s prime minister Boris Johnson said he would step down less than three years after his landslide election victory, following a series of scandals that have ensnared his government. Here’s what led to this:

The Pincher case. Mr. Johnson’s downfall is connected with the resignation of Chris Pincher, a Conservative deputy chief whip, after he admitted to having groped two men. Outrage grew as it was revealed that Mr. Johnson was aware of prior sexual misconduct allegations against him when he appointed him; the prime minister had previously denied knowing about the accusations.

Nor will the leadership campaign lack for culture warriors. Suella Braverman, who currently serves as attorney general, declared herself a candidate on ITV last week by vowing to crack down on migrants illegally crossing the English Channel, one of several positions that echo those of Mr. Johnson.

“We need to get rid of all of this woke rubbish,” Ms. Braverman added, “and actually get back to a country, where describing a man and a woman in terms of biology does not mean that you are going to lose your job.”

The political forces that fueled Brexit — voter disengagement, economic grievances, distrust of politicians — predated Mr. Johnson, much as similar forces predated Donald J. Trump in the United States. How much each leader was a catalyst for events or merely a symptom of them will be long debated in both countries.

And just as the United States is still dealing with the charged issues that catapulted Mr. Trump into office, analysts said British politics would continue to be dominated by hot-button topics — from immigration to economic equity between England’s north and south — that were litigated in the Brexit debate.

“We are still in the relatively early stages of living with the consequences of Brexit,” said Simon Fraser, a former head of Britain’s Foreign and Commonwealth Office. “Brexit is going to continue to devour its children.”

Those running to replace Mr. Johnson, Mr. Fraser said, have little incentive to soften his hard-line positions on Brexit-related issues because they will be selected by the Conservative Party’s lawmakers and rank-and-file members, for whom Mr. Johnson’s Brexit policy was perhaps the greatest success of his tenure.

Mr. Johnson stitched together a potent but unwieldy coalition to win a landslide general election victory in 2019. It consisted of traditional Tory voters in the country’s south, as well as working-class voters in the industrial north, who had historically voted for the Labour Party but defected to the Conservatives in part because of Mr. Johnson’s vow to “Get Brexit Done.”

“Boris Johnson was able to move into that space, partly by dint of personality, partly by his complete absence of a political philosophy,” Mr. Menon said. Without Mr. Johnson’s protean appeal to those voters, he added, social and cultural issues are “the only glue that holds it together.”

With Mr. Johnson vowing to stay in Downing Street until the Conservatives select a new leader — a process that could take until the early fall — it is too soon to judge whether he will have a lingering impact on British politics after he is no longer prime minister. Some of that will depend on whether he opts to stay in Parliament, where he could easily vex his successor from the backbenches.

Jonathan Powell, who served as chief of staff to Prime Minister Tony Blair, used an analogy to “long Covid,” the prolonged aftereffects of Covid-19.

“In the United States, you’re suffering from Long Trump,” he said. “The question is, are we in Britain going to suffer from Long Boris?”

Mr. Powell said he was cautiously optimistic that Britons would be able to move on from Mr. Johnson more readily than Americans from Mr. Trump because their institutions have, by and large, proven resilient in the face of his tactics.

After some dithering, for example, Conservative Party lawmakers rallied themselves to stand up to a leader in whom they had lost confidence. The Republican Party, by contrast, remains almost wholly in thrall to Mr. Trump.

Read More on the Political Situation in Britain

For all his precedent-shattering, norm-busting ways, Mr. Johnson’s denouement was oddly in keeping with custom, if with a typically dramatic flourish. His cabinet abandoned him, much as members of Prime Minister Margaret Thatcher’s cabinet abandoned her in November 1990, forcing her to yield to the inevitable and step down.

None of this is to diminish Mr. Johnson’s place in history, which even his harshest critics say will be consequential.

Still, he said Mr. Johnson would not play a king-making role after leaving office because he does not command a Brexit Brigade anything like Mr. Trump’s “Make America Great Again” movement.

“The Conservatives selected him quite coolly, quite calculatingly, because they thought he was a winner,” Professor Garton Ash said. Once the campaign is over, and the candidates have finished offering red meat to the Tory base, he predicted that “the Conservatives will return to their more centrist positions.”

Other experts, however, argue that the cost-of-living crisis in Britain will make it hard for Mr. Johnson’s successor to chart a more conciliatory path with Europe.

The prime minister’s promises that Brexit would unleash a new era of growth in Britain have not been borne out. In fact, it has lagged the European Union, a fact that would not surprise economic forecasters or the government itself, which predicted that Brexit would hurt the British economy.

To remedy that, most candidates to succeed him are expected to call for some combination of lower taxes and less regulation.

“None of them is going to acknowledge the downsides of Brexit,” said Mujtaba Rahman, an analyst at the political risk consultancy, Eurasia Group. “They’ll frame it as part of new Brexit opportunities.”

But cutting taxes and easing regulations would only widen the divergence between Britain and the European Union. That would aggravate the existing impasse over trade in Northern Ireland, which has long angered France and the Republic of Ireland, and recently drew a strong rebuke from the German government.

“It’s not clear to me at all that the Brexit conversation is going to end, and it may actually dominate the campaign,” Mr. Rahman said. “Europe remains an itch that the Conservative Party cannot stop scratching.”