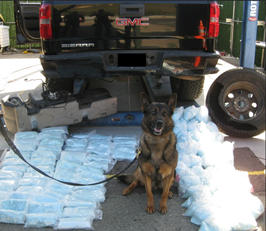 Border Patrol agents made an arrest in California early Monday morning after they pulled over a driver attempting to smuggle around 250 pounds of fentanyl.

A 2015 Black GMC was stopped on an interstate near Campo, California, at around 3:00 a.m., and a Border Patrol K-9 conducted a sniff and alerted agents to the vehicle.

Agents then searched the vehicle and discovered multiple bundles concealed within the automobile’s spare tire and gas tank. A combined total of around 250 pounds of pills that tested positive for fentanyl were found in the bundles.

This amount of fentanyl has an estimated street value of more than $3,600,000, according to CBP.

A combined total of around 250 pounds of pills that tested positive for fentanyl was found in the vehicle.
(CBP)

The amount of fentanyl seized has an estimated street value of more than $3,600,000. (Drug Enforcement Administration via AP, File)

The driver was only described by CBP as an adult male.

“Our agents prevented these dangerous narcotics from reaching our communities,” Chief Patrol Agent Aaron Heitke said in a statement. “I am proud to say that our Border Patrol agents here in San Diego Sector are responsible for over 50% of all the fentanyl seized by the U.S. Border Patrol this fiscal year.”

The drugs were handed over to the Drug Enforcement Administration and the vehicle was seized by CBP.