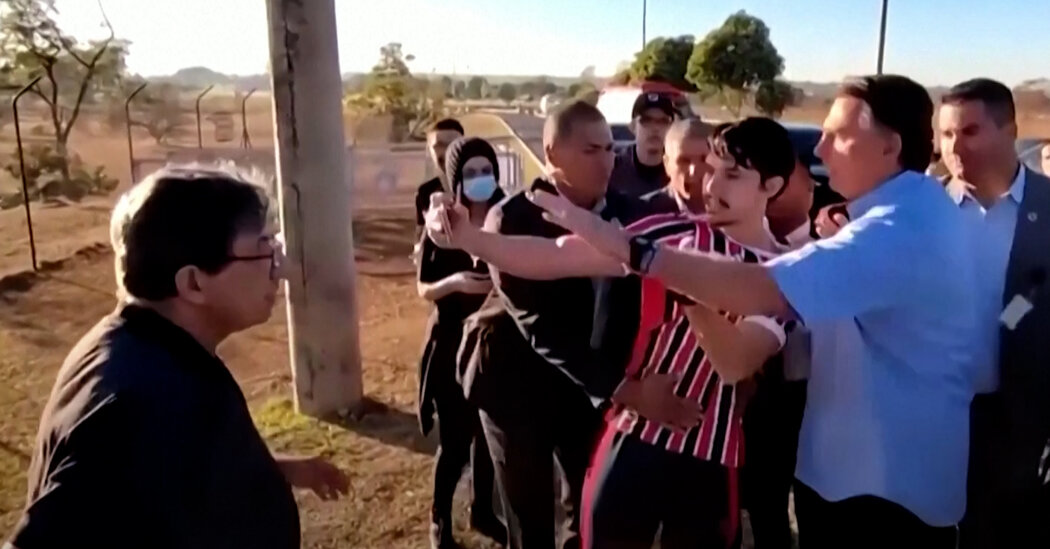 RIO DE JANEIRO — A motorcade of black vehicles approached Brazil’s presidential palace on Thursday afternoon and then, surprisingly, stopped. To the delight of a crowd gathered under the afternoon sun, out of one of the cars stepped President Jair Bolsonaro.

About two-dozen selfie-seekers swarmed the president, who smiled and posed for photos. It was one of the impromptu meet-and-greets that Mr. Bolsonaro has become known for during his campaign for re-election.

Then the cheerful vibe broke. One man in the crowd began shouting, demanding answers about one of Mr. Bolsonaro’s policies. Mr. Bolsonaro got back into his vehicle.

“I’m here every day, Bolsonaro. I want to see you be brave enough to come talk to me,” shouted the protester, Wilker Leão, as he recorded himself on his phone. Repeatedly, he hurled an insult at the president that roughly translates to “the pork-barrelers’ little lap dog,” though a bit more vulgar.

Suddenly the president exited the vehicle, grabbed Mr. Leão’s shirt and tried to snatch his phone. “Come here,” Mr. Bolsonaro said, gripping Mr. Leão’s arm as he tried to get away. “I want to talk to you.”

It was a surprising scene, even by the standards of a president who has rewritten Brazil’s standards for how the leader of Latin America’s largest nation should act. (Think vulgar attacks on his rivals, a stream of false statements and a refusal to admit whether he has been vaccinated.) Video of the incident rocketed around the Brazilian internet — a president scuffling with a constituent just six weeks ahead of national elections.

What remains to be seen is the incident’s effect on the moderate voters who will effectively decide the election. Mr. Bolsonaro has consistently trailed former President Luiz Inácio Lula da Silva in opinion surveys, though he has recently gained ground, buoyed by Brazil’s improving economy. If no one receives a majority of the votes in the Oct. 2 election, there will be a runoff on Oct. 30.

After Mr. Bolsonaro grabbed Mr. Leão, the president’s security team quickly pushed the man away, as seen in footage captured by a journalist for the Brazilian news organization G1, as well as by Mr. Leão’s own video. The president’s team then told people to stop filming. The G1 journalist continued to film. Mr. Bolsonaro posed for more photos.

Eventually Mr. Leão walked back over, surrounded by the president’s security detail.

“Why so aggressive?” Mr. Bolsonaro asked.

“Because when I tried to come here, I was forbidden from coming in and talking to you,” Mr. Leão replied.

The two men debated Brazilian politics for about five minutes before Mr. Bolsonaro got back into his vehicle and left.

Mr. Bolsonaro’s representatives did not respond to a request for comment.

Mr. Leão, 26, is a social-media personality with nearly 50,000 followers on both YouTube and Instagram. He told The Times that he is also a lawyer and had gone to the entrance of the presidential residence every day for more than 50 days to question the president on camera.

“The main goal was to discuss the mistakes of his government, and his reaction I found quite absurd,” he said. “He likes to raise the flag of freedom of expression, but where is that freedom for the other side who questions him?”

Beyond the bizarre sight of the president scuffling with a YouTuber, the insult that Mr. Leão repeatedly shouted at Mr. Bolsonaro has now taken on a life of its own, quickly inspiring memes and parody songs and even being projected onto the side of a building. Critics of Mr. Bolsonaro have quickly latched onto the insult, which is cutting, playful and slightly vulgar all at the same time, as a new label for the polarizing president.

The insult — “tchutchuca do centrão” — has posed a particular challenge for foreign correspondents trying to translate it for their audiences. The translation is particularly tricky because both words, “tchutchuca” and “centrão,” are deeply Brazilian and have complicated backgrounds.

The “centrão” is the powerful centrist coalition of political parties that effectively controls Congress and has long been criticized for cutting back-room deals to benefit its members and lobbyists. Translators, linguists and others with a deep knowledge of both Brazilian Portuguese and English said it could be translated as “pork barrelers,” “the political establishment” or perhaps “the Big Center.”

“Tchutchuca,” pronounced choo-CHOO-kah, is even trickier. Believed to have roots in Angolan and the Indigenous Tupi language, and linked to words that mean “a little crazy” and “jumping around,” a version of it eventually became a sort of term of endearment in Brazil.

Then, in 2001, a hit Brazilian funk song gave tchutchuca new life, with a chorus that went: “Come, come, tchutchuca / Come here to your tiger / I’m going to throw you on the bed.” Over time, tchutchuca came to mean a submissive woman.

In 2019, the word entered the world of politics when a congressman called Brazil’s economic minister a tchutchuca to the banks.

The translators and linguists said that in the context of Mr. Leão’s insult, it could be translated as the centrão’s lap dog or errand boy, or as an epithet referring to a female dog. The Associated Press settled on “darling.” Tom Phillips, the Guardian’s longtime correspondent in Brazil, considered “the establishment’s bimbo” or “pork-barrel tootsie.”

Flora Thomson-DeVeaux, an American who has lived in Brazil on and off for more than a decade and who translates books from Portuguese to English, said any English translation of the Brazilian left’s new nickname for Mr. Bolsonaro fails to capture both the quirky sound and the biting, nuanced meaning.

“Tchutchuca was innocent and then there was a naughty twist on it. So something like ‘pussycat’ would fit,” she said. “But pussycat is too common parlance in English, so I was thinking something that almost echoed the sound of ‘tchutchuca.’”

Her answer? “If it were a novel, I might try to translate tchutchuca as pussy-wussy.”