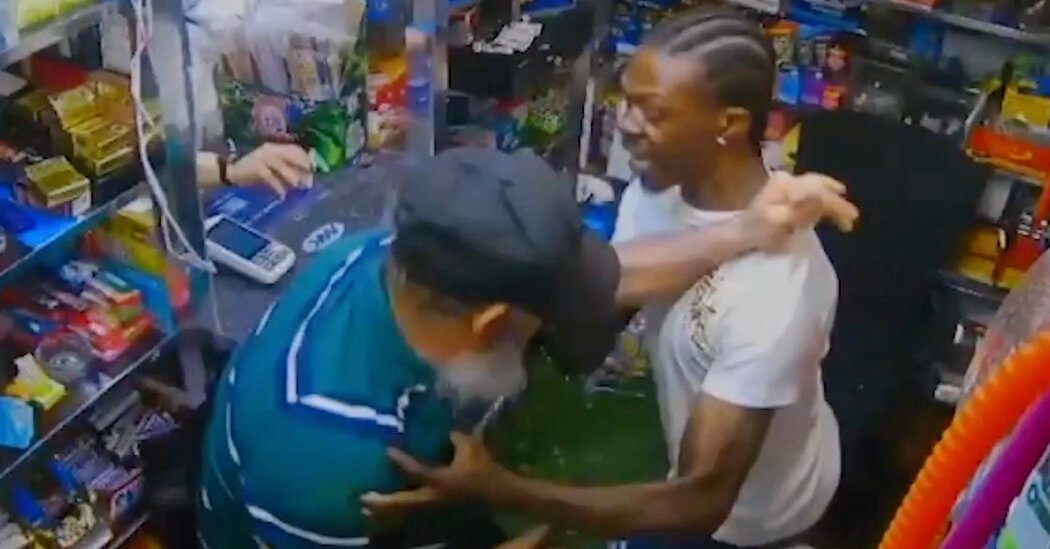 After weeks of mounting pressure, the Manhattan district attorney on Tuesday morning dropped a murder charge against a bodega clerk who fatally stabbed an attacker.

Jose Alba, 61, killed Austin Simon, 35, on July 1. Mr. Simon had gone behind the counter at the Harlem bodega and shoved Mr. Alba after he had argued with Mr. Simon’s girlfriend over paying for snacks for her 10-year-old daughter. Police investigators said that Mr. Simon was not armed.

Mr. Bragg and his office were criticized for initially requesting a $500,000 bail, which prosecutors said they asked for because Mr. Alba had been planning to leave the country. But Mr. Alba’s supporters said that he was defending himself from a younger man who was the aggressor and should not face charges.

In a motion to dismiss the case filed Tuesday morning, the district attorney’s office said that it would be unable to “prove beyond a reasonable doubt that the defendant was not justified in his use of deadly physical force.” The case will not be presented to a grand jury.

“We are all clearly disappointed and can’t understand how it’s OK to take an unarmed man’s life,” said Mr. Simon’s cousin Candra Simon. “This decision sets a dangerous precedent.”

But Mayor Adams signaled his approval: “The D.A. in my opinion made the right decision,” he said Tuesday.

Mr. Alba’s attorneys at the Neighborhood Defender Service of Harlem asked for privacy and said that he “looks forward to moving about freely and spending time with his family.” Mr. Alba, a father and grandfather, emigrated from the Dominican Republic in search of better opportunities 35 years ago and became a U.S. citizen 18 years ago, working in bodegas to support his family.

Mr. Bragg was criticized for weeks in tabloid columns and by bodega associations, and the controversy escalated as clips of the fatal encounter began to emerge. The reaction was something of a reversal: The district attorney has been targeted for being too lenient on defendants, an argument that public defenders say is not borne out by facts. In the case of Mr. Alba, the district attorney was blasted for being too punitive.

Mr. Adams said Mr. Alba was an example of how “innocent New Yorkers” should be able to work or go to school in peace without the threat of crime. The mayor on July 7 went to the site of the stabbing and held a news conference strongly supporting Mr. Alba.

Though the mayor and the district attorney have rarely clashed publicly, there is tension between their policies. Mr. Adams, a former police captain, has often called for harsher prosecutions, while Mr. Bragg has pushed for more lenient responses to some lesser crimes. Early in his tenure, Mr. Bragg ran afoul of Mr. Adams’s police commissioner, Keechant Sewell, who wrote a letter to all officers saying that the district attorney’s policies could threaten public safety. (The two later met to discuss “issues of mutual concern.”)

The swift dismissal of the charge against Mr. Alba was not particularly unusual, veterans of the office said. Karen Friedman Agnifilo, a deputy to Mr. Bragg’s predecessor, Cyrus R. Vance Jr., said that the investigation appeared to have been conducted “quite fast.”

Joan Illuzzi, a veteran prosecutor who led the office’s trial division before leaving this year, said that dropping the charge was the right decision.

“That certainly did look like self-defense to me,” she said. “The minute you reach the back of the counter area, it becomes a burglary. And as the proprietor of the store, you’re certainly allowed to defend yourself.”

Mr. Alba’s case was called after noon at a Lower Manhattan courthouse; he was not present as the judge, Laurie Peterson, said that the complaint against him would be dismissed and sealed.

According to prosecutors, the argument that led to Mr. Simon’s death started around 11 p.m. when Mr. Simon’s girlfriend, who has not been named, entered the Blue Moon convenience store at West 139th Street and Broadway to buy snacks for her daughter.

The card the woman used to pay for the transaction was declined and Mr. Alba used both hands to take the snacks back from the girl, touching the girl’s hands.

Mr. Simon’s girlfriend saw Mr. Alba grab the snacks and became upset, knocking the items off the counter and yelling at Mr. Alba that she was going to get someone to beat him up.

Mr. Simon came to the store and called for Mr. Alba to come out from behind the counter.

“I don’t want a problem, papa,” Mr. Alba was heard saying, according to the video.

Mr. Simon pushed behind the counter and asked Mr. Alba why he had snatched the item from the girl’s hands. Mr. Simon then shoved him into a wall of shelving.

“You’re going to say sorry to my daughter,” Mr. Simon said, according to a witness and Mr. Alba’s own account to investigators.

Mr. Simon did not have a weapon in his hand but a box cutter was clipped inside his shorts. Both the video and Mr. Alba’s statements confirm that Mr. Simon never displayed the weapon. Prosecutors say there is no evidence that Mr. Simon mentioned the weapon or that Mr. Alba was aware of the box cutter.

As Mr. Simon struggled to drag Mr. Alba from behind the counter, Mr. Alba grabbed a knife and began repeatedly stabbing Mr. Simon. According to prosecutors, Mr. Simon was stabbed in the heart, lung and jugular vein. Any single wound could have killed him, according to the medical examiner.

During the 30-second struggle, Mr. Simon’s girlfriend reached in and tried to pull Mr. Alba’s arm away but he would not stop stabbing Mr. Simon. The woman reached into her purse, grabbed a knife and stabbed Mr. Alba in the arm.

Mr. Simon’s family has said that he should not have confronted Mr. Alba. But after watching the video, they believe that Mr. Simon did not deserve to die over the altercation. The family is also disappointed that Mr. Adams inserted himself into the case.

“A.J., as we called him, was flawed but he was a father, a cousin and a brother,” Ms. Simon said. “He wasn’t a monster, and his life mattered.”