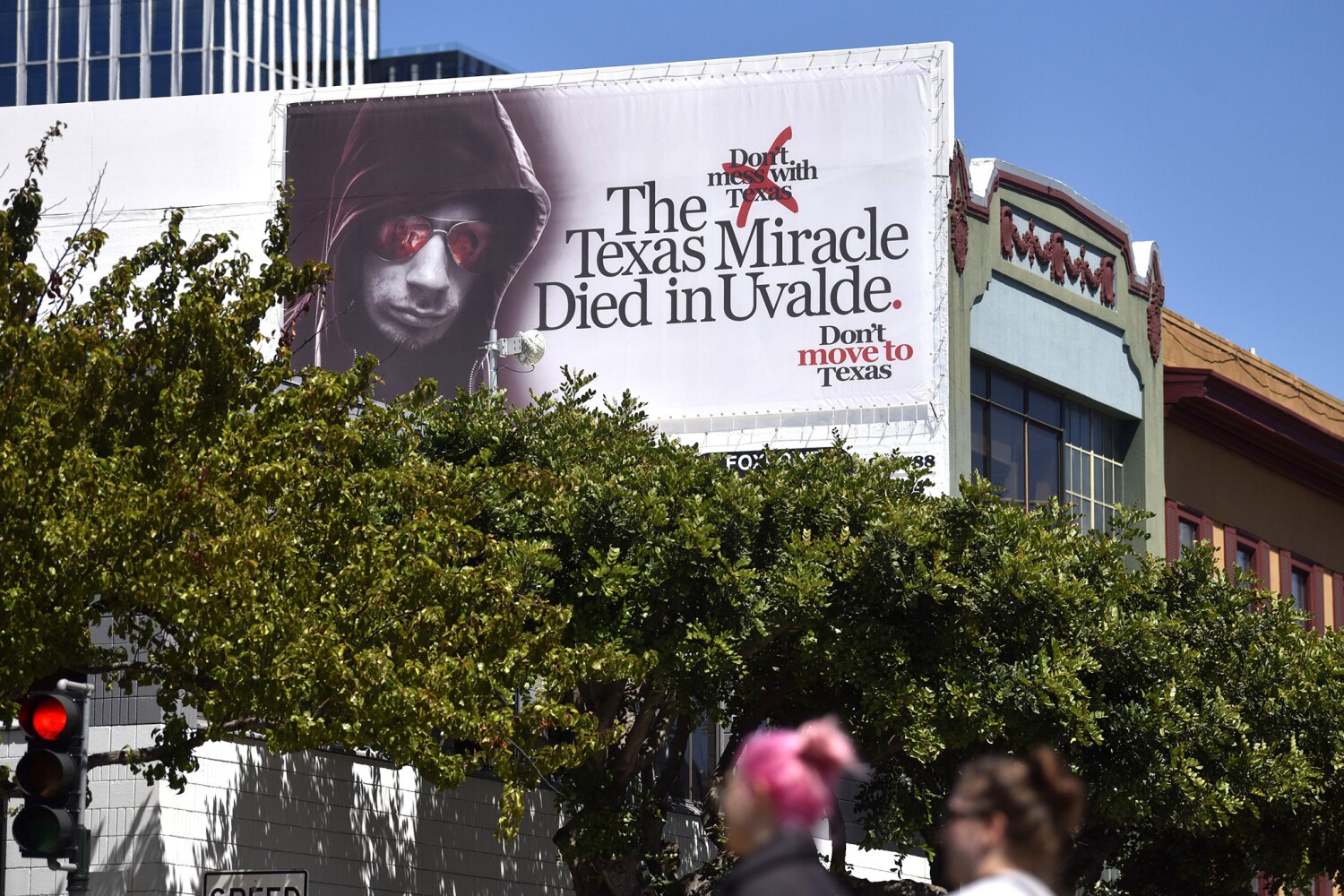 Don’t mess with Texas. In fact, just don’t even move there.

An ominous and contentious billboard greeted Los Angeles and San Francisco residents this week with a strong warning: “Don’t move to Texas.”

“The Texas Miracle died in Uvalde. Don’t move to Texas,” the billboard reads, paired next to a dark, eerie image of a hooded man wearing sunglasses and the famous Texas catchphrase, “Don’t mess with Texas,” crossed out in red.

“The Texas Miracle” is a term coined by then-Texas Gov. Rick Perry in 2011 following his claim that the state’s economy managed to survive the country’s Great Recession. “Don’t mess with Texas” was coined by the Texas Department of Transportation as an anti-littering campaign, but has become a popular and prideful slogan for residents of the Lone Star State.

A photo of the billboard was uploaded to Reddit on Thursday, with many commenters in the various California and Texas subreddit threads questioning who was behind the billboard and what message the advertiser is trying to send.

While the billboard shows no obvious political affiliation or sponsor, some Redditors speculated that the billboard is trying to send a message, possibly coming from strongly conservative Texans who are trying to stop the proliferation of liberal Californians moving to Texas, especially with the looming gubernatorial elections in November. Others speculate that the billboard came from Californians who are attempting to slow the mass exodus of residents packing up and leaving for Texas.

The Los Angeles billboard is located at the intersection of Barham and Cahuenga boulevards, overlooking the 101 Freeway. The San Francisco billboard, located near the intersection of Folsom Street and 7th Street, is leased to advertisers by FoxPoint Media, a billboard advertising company based out of Chicago.

A request for comment from FoxPoint Media was not immediately answered.

According to data from the U.S. Census Bureau, along with the Texas Relocation Bureau, Texas ranked second in the nation for relocations, with the highest number of new residents coming from California and Florida, respectively. California ranked first for the number of residents moving out of state.

Some Redditors expressed anger over the use of the Uvalde school shooting tragedy — which claimed the lives of 22 people, including 19 children, in May. One Redditor called the billboard “vile,” and another said it was “Pretty f—king disgusting.”

The long-standing turf war between Texas and California has been perpetuated by California Gov. Gavin Newsom and Texas Gov. Greg Abbott, with Newsom running full-page ads earlier this year criticizing the conservative governor in three of the state’s largest newspapers, including the Houston Chronicle, El Paso Times and Austin-American Statesman.