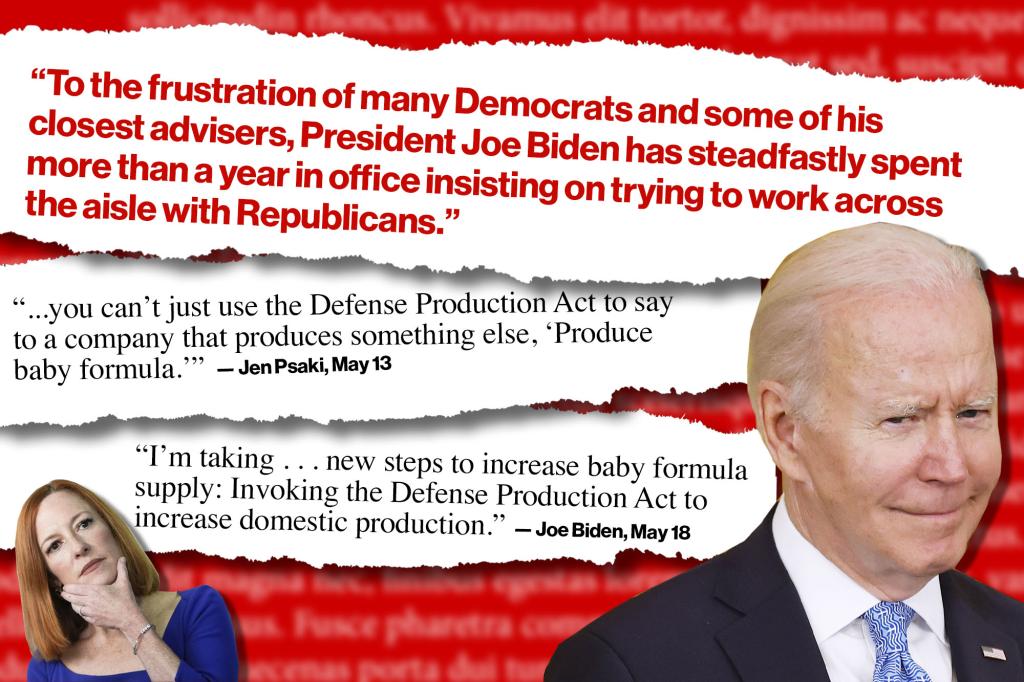 “To the frustration of many Democrats and some of his closest advisers, President Joe Biden has steadfastly spent more than a year in office insisting on trying to work across the aisle with Republicans.”

We say: Good grief. Does Politico — let alone Democrats — really believe the pabulum it’s peddling? Biden actually bragged about passing the $1.9 trillion stimulus bill that helped fuel inflation “without a single, solitary Republican vote.” And how was he “trying to work” with the GOP when he scoffed, “What are Republicans for? What are they for? Name me one thing they’re for.”

We say: White House Press Secretary Jen Psaki said President Biden couldn’t visit Waukesha, Wis., last year after a racist Black Lives Matter supporter drove his SUV into a Christmas parade, killing six and injuring dozens, because “any president going to visit a community requires a lot of assets.” But Biden had no problem finding “assets” to visit Buffalo after a white supremacist shot up a supermarket in a black neighborhood, killing 10. Wonder why.

We say: Where to begin? The court stenographers over at the Gray Lady did get one thing right in their story on Disinformation Governance Board head Nina Jankowicz’s resignation: She is indeed “an authority on disinformation.” The Biden flunky supported suppressing The Post’s Hunter Biden laptop reporting before the 2020 election, implying it was Russian disinformation, and boosted Christopher Steele long after even the Justice Department admitted his dossier was garbage. The Post and other pubs simply pointed these things out — and the left calls that “disinformation.”

“[B]aby formula is so specialized and so specific that you can’t just use the Defense Production Act to say to a company that produces something else, ‘Produce baby formula.’”

We say: Whiplash! Not for the first time, Team Biden’s left hand doesn’t know what the right hand is doing. And remember: The baby-formula shortage has been building for months now. Yet the White House still can’t get its messaging act together — let alone actually do something helpful to alleviate the crisis.