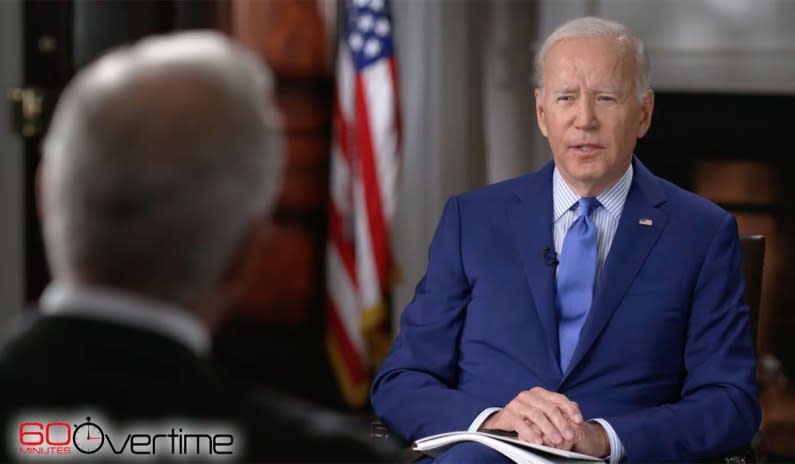 Biden told 60 Minutes that he has not been briefed on the sensitive documents that FBI agents recovered from Trump’s Mar-a-Lago residence in August and that he has not spoken to anyone about whether important national security secrets were revealed.

“I have not personally spoken to anyone on that — in that regard. I’m sure my administration is aware of all of that, and so is the National Security Council. But I have not,” Biden said.

Host Scott Pelley asked Biden about a photo released by the Justice Department included in a court filing last month showing secret and top secret documents spread out on the floor of Mar-a-Lago.

“When you saw the photograph of the top-secret documents laid out on the floor at Mar-a-Lago, what did you think to yourself? Looking at that image,” the host asked.

“How that could possibly happen. How one — anyone could be that irresponsible,” Biden said. “And I thought what data was in there that may compromise sources and methods? By that I mean names of people who helped… And it just — totally irresponsible.”

“I have not asked for the specifics of those documents because I don’t want to get myself in the middle of whether or not the Justice Department should move or not move on certain actions they could take,” Biden added.

The Department of Justice is investigating Trump for removal or destruction of records, obstruction of an investigation, and violating the Espionage Act, according to the search warrant for Trump’s residence at Mar-a-Lago.

Meanwhile, a list of items removed from the property shows the FBI recovered eleven sets of classified documents during the search, including some top-secret documents that should only have been available in special government facilities.

A federal judge recently granted Trump’s petition for an independent special master to review the documents seized from Mar-a-Lago.

Trump arguing a third-party review is necessary because the FBI raid, which occurred just months before the 2022 midterm elections, “involved political calculations aimed at diminishing the leading voice in the Republican Party, President Trump.”