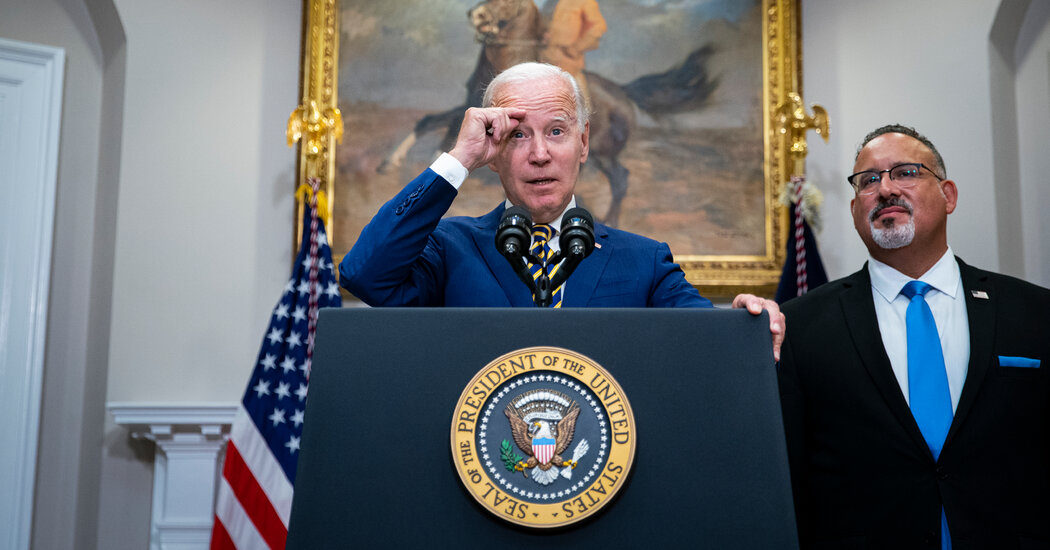 WASHINGTON — President Biden and Senator Chuck Schumer of New York, the majority leader, boarded Air Force One on May 17 in Buffalo after visiting with the families of 10 people gunned down in a supermarket. The emotions from the mass shooting were raw, but Mr. Schumer had something else on his mind, too.

Sitting alone with the president in his private cabin, the Senate’s top Democrat spent much of the 58-minute flight back to Washington urging Mr. Biden to wipe away hundreds of billions of dollars in student debt owed to the federal government. It was a promise the president had made as a candidate, Mr. Schumer argued, and it would help millions of low- and middle-income Americans.

Mr. Biden would prove to be a hard sell.

The president had been agonizing for months about the decision. At a CNN town hall a month after taking office, he had flatly rejected forgiving $50,000 in student debt like Mr. Schumer wanted, saying it was too costly and could be seen as unfair to those who paid off their loans. “I will not make that happen,” he said. He even seemed unconvinced that debt cancellation was a good idea at all, suggesting it might benefit “people who have gone to Harvard and Yale and Penn.”

During the flight in May, Mr. Schumer persisted, according to an account of the discussion he provided this week.

Over lunch, he appealed to the president’s emotions, describing a young woman who had approached him with tears in her eyes, saying the crushing burden of her loan payments made it difficult to live. The senator also sought to soothe the president’s fear that erasing some debt would be a boon for rich white students, telling him that “the vast majority are poor people and people of color.”

On Wednesday, Mr. Biden agreed, announcing that he would wipe out significant amounts of student debt for tens of millions of Americans. With less than three months until midterm elections that will determine who controls Congress, Mr. Biden bowed to months of lobbying and overcame his own deep reservations, and those of aides, about the policy and the political implications of an enormous exercise of presidential power.

Key to convincing the president, aides said: making sure debt relief would target much of the money to lower-income and minority students.

He signed off on a plan that went further than even some of his closest aides had expected — canceling $10,000 in debt for those earning less than $125,000 per year and $20,000 for those with Pell grants for low-income students. His plan also reduces payments for all federal student borrowers for years to come.

“Some think it’s too much,” Mr. Biden said when he announced his decision, noting the outrage from Republicans and some Democrats. “Some think it’s too little. But I believe my plan is responsible and fair. It focuses the benefit on middle-class and working families, it helps both current and future borrowers, and it will fix a badly broken system.”

The long-delayed move has drawn fierce criticism from Republicans, who describe it as a costly giveaway to many who do not deserve it, including families making as much as $250,000 a year. It has also ignited an intense debate about the economic consequences, with Lawrence H. Summers, the Treasury secretary under President Bill Clinton, warning that it will “contribute to inflation,” and Jason Furman, an Obama economic adviser, calling it a “reckless” idea that will add a “half-trillion dollars of gasoline on the inflationary fire that is already burning.”

The White House and some outside economists, including analysts from Goldman Sachs, say the debt relief will have almost no effect on inflation because it will coincide with the resumption of loan payments for all borrowers, after a nearly three-year pause for the pandemic.

Mr. Biden’s deliberations on the student loan issue underscored his reluctance to fully embrace the progressive agenda of his Democratic rivals during the 2020 presidential primaries. But they also revealed his willingness to change his mind and his desire to be seen as an advocate of the middle class.

As he finished making the announcement on Wednesday, Mr. Biden was asked by a reporter whether it was fair to those who had already paid back their student loans.

“Is it fair to people who in fact do not own a multibillion-dollar business if they see one of these guys give them all a tax break?” Mr. Biden snapped back, referring to Republican tax cuts in 2017. “Is that fair?”

Janet L. Yellen, the Treasury secretary and former Federal Reserve chair, was one of the chief skeptics among Mr. Biden’s inner circle of top advisers.

She, like others, worried that the economic effects of a giant giveaway could be profound, especially as the Federal Reserve struggled to keep inflation at bay, according to several officials. Her message was echoed by top Democratic economists, who peppered the White House with concerns about the potential effects.

Mr. Biden began hearing concerns from some of his economic advisers as early the spring of 2021. What had been seen by some as an urgent item was delayed again and again as Mr. Biden mulled the options.

On Dec. 15, the White House hosted a call with advocates of student loan forgiveness, but delivered a message the activists did not want to hear: The president had still not decided to cancel any student debt. In fact, because the economy was rebounding, borrowers needed to prepare for the end of the moratorium on payments, which had been extended regularly since the pandemic began.

In senior staff meetings this spring, as Mr. Biden continued deliberating, advisers offered different takes. Ron Klain, the White House chief of staff, argued that student loan cancellation could galvanize the support of younger voters, many of whom had grown frustrated with the administration.

Others, like Mike Donilon, one of the president’s closest political advisers, showed Mr. Biden polling data indicating that support among Americans for cancellation was split. Whatever its effect on those with debt, the move could alienate older Americans who saved money to pay off tuition for themselves or their children, he told the president. The plan could be seen as unfair.

Those who expressed concern were feeding the president’s own uncertainty, according to people familiar with his thinking.

The first lady was uncomfortable too, people close to her said. A college professor, Jill Biden had been vocal about her husband’s call for free community college. But she did not publicly endorse forgiving student debt.

The debate continued, slowly, throughout the summer. Mr. Biden’s senior aides would gather for a meeting to discuss the issue only to be told by the president to return again, with more data on whom forgiveness would benefit.

“You’re not going to be able to just go in there and tell him anything,” said Cedric Richmond, a former senior adviser for Mr. Biden. “You’re going to have to have an analysis, some proof.”

In the West Wing, Vice President Kamala Harris was one of the most persistent promoters of canceling student debt.

During Valentine’s Day week, Ms. Harris had her staff members draft a memo listing the president’s concerns, along with talking points intended to address them one by one, an administration official said. On his concern that debt cancellation would benefit “private elite schools,” they recommended in the memo that she counter by saying that “only 0.3 percent of federal loan borrowers attended Ivy League schools.” In response to his worry that loans should be forgiven by an act of Congress, the memo urged her to say that similar executive authority was already being used to enact the loan payment pause.

When the president met in April with members of the Congressional Hispanic Caucus, who were eager for the president to cancel more than $10,000 in debt, it was clear he had still not made up his mind.

Should debt relief be applied to borrowers of both public and private colleges? he asked. It was an indication to some attendees that Mr. Biden was struggling with how much debt to forgive and who should benefit.

The lobbying effort continued throughout the summer.

At the White House in May, Mr. Schumer and Senators Elizabeth Warren, Democrat of Massachusetts, and Raphael Warnock, Democrat of Georgia, presented data to Mr. Biden showing that debt cancellation would benefit borrowers who failed to obtain a degree, according to a person familiar with the meeting.

The three senators had been among the most enthusiastic backers of student debt cancellation. Ms. Warren had made it a central plank in her presidential bid. Mr. Warnock and Mr. Schumer both favored going bigger than the $10,000 in relief Mr. Biden promised during the campaign. (Ms. Warren also used Air Force One as a lobbying venue, bending Mr. Biden’s ear during a presidential flight to a wind farm in Massachusetts.)

The data the trio handed Mr. Biden during the May meeting was intended to confront what they knew was one of his hangups: the notion that debt cancellation would be a giveaway to the privileged.

When it became clear Mr. Biden was unwilling to erase more than $10,000 in debt for all borrowers, the lawmakers switched gears, lobbying instead for the president to offer increased relief for those who had Pell grants, a program already targeted to low-income students.

Outside groups continued to hammer the president as well. Ten days after the president’s flight from Buffalo with Mr. Schumer, Derrick Johnson, the president of the N.A.A.C.P., delivered a blunt message to Mr. Biden in a tweet.

“Canceling $10,000 in student loan debt is like pouring a bucket of ice water on a forest fire,” he wrote.

In recent weeks, as it became clear that Mr. Biden was nearing a decision, advocates stepped up their efforts. Senators Schumer, Warren and Warnock spoke with Mr. Klain and Brian Deese, the president’s top economic adviser, on Friday. Mr. Schumer followed up with a call to the president on Tuesday. Mr. Johnson called senior White House officials on Monday and again on Wednesday morning, just hours before the announcement.

For a move so long in coming and so deeply debated, it seemed unusually rushed after Mr. Biden made his choice.

The announcement came before the Education Department could fully design how the program would work, and before White House economists could estimate its full cost. The lack of a revenue estimate forced administration officials into a tortured attempt to explain how the plan would be “fully paid for,” as Mr. Biden has insisted for all his proposals.

“Everyone’s calling us, but we don’t have answers,” said an official at one servicer.

Late Thursday night, Karine Jean-Pierre, the White House press secretary, said a portion of the program would cost $24 billion a year if 75 percent of those eligible requested cancellation. On Friday, Bharat Ramamurti, the deputy director of the National Economic Council, said more precise estimates would not come for weeks, at least.