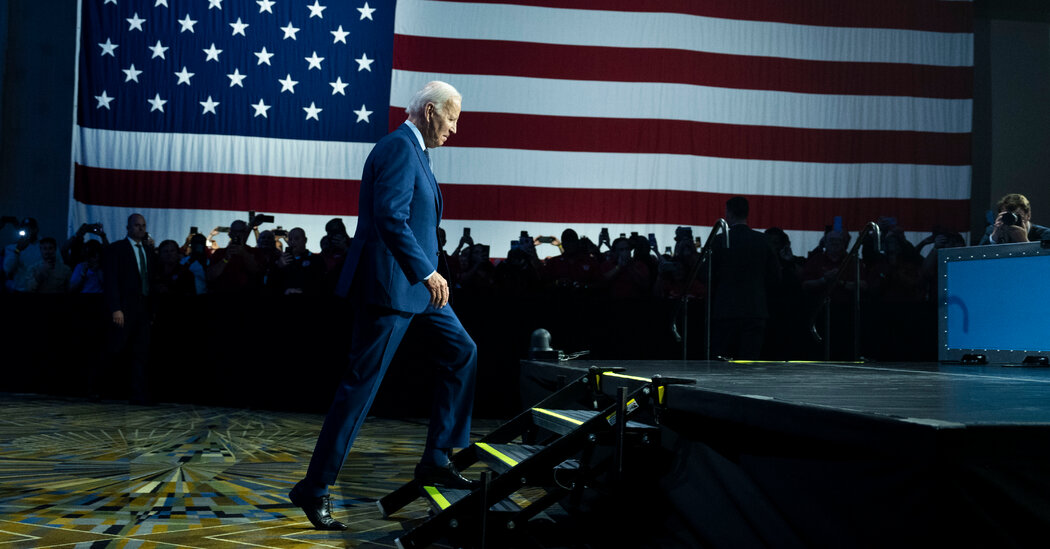 WASHINGTON — President Biden said in an interview aired on Sunday evening that former President Donald J. Trump had been “totally irresponsible” for keeping top-secret documents at his residence and private club in Florida, but he said he had not asked for specifics about the documents in order to stay out of the Justice Department’s potential decision to charge Mr. Trump criminally.

Speaking to Scott Pelley of CBS’s “60 Minutes,” in interviews taped from Washington and from Mr. Biden’s trip last week to the North American International Auto Show in Detroit, the president also declared the Covid-19 pandemic “over” and said the country seemed to be in good shape.

“The pandemic is over,” Mr. Biden said, speaking on the floor of the auto show, which he visited to champion his administration’s efforts to bolster electric vehicle production in the United States.

“We still have a problem with Covid,” he said, according to a transcript provided by “60 Minutes.” “We’re still doing a lot of work on it. But the pandemic is over. If you notice, no one’s wearing masks. Everybody seems to be in pretty good shape. And so I think it’s changing. And I think this is a perfect example of it.”

Mr. Biden’s pronouncement was rosier than the head of the World Health Organization, Tedros Adhanom Ghebreyesus, who said last week that “we have never been in a better position to end the pandemic” but that the world is “not there yet.”

More on the Trump Documents Inquiry

In the interview, Mr. Biden expressed optimism over inflation, which hit a 40-year high this summer. The president stressed falling gasoline prices and focused on the monthly rate of price increases, which slowed in July and August, even though annual inflation continues to top 8 percent.

Asked if he was telling Americans that “inflation is going to continue to decline,” Mr. Biden said no, then highlighted measures on health care and energy that he signed into law last month.

Mr. Biden similarly expressed confidence that the country could avoid a recession even as the Federal Reserve raises interest rates aggressively to slow consumer demand and bring down inflation. But he acknowledged that the economy dodged potential catastrophe last week when negotiations hosted by Labor Secretary Martin J. Walsh yielded a tentative agreement between freight rail companies and labor unions to avert a nationwide rail strike. Union members must still ratify the deal.

“If, in fact, they’d gone on a strike, the supply chains in this country would’ve come to a screeching halt,” Mr. Biden said. “We would’ve seen a real economic crisis.”

Mr. Pelley asked Mr. Biden what he thought when he saw a photograph, released by the F.B.I., of the seized documents laid out by agents on the floor of Mar-a-Lago.

“How that could possibly happen?” Mr. Biden replied. “How one — anyone could be that irresponsible. And I thought, ‘What data was in there that may compromise sources and methods?’”

Mr. Biden said he had not asked for specifics of the documents’ contents “because I don’t want to get myself in the middle of whether or not the Justice Department should move or not move on certain actions they could take. I agreed I would not tell them what to do and not, in fact, engage in telling them how to prosecute or not.”

On foreign policy, Mr. Biden said Ukraine was “defeating Russia” by making gains in repelling its invading army, but he stopped short of saying Ukrainians were “winning the war.”

“Russia’s turning out not to be as competent and capable as many people thought they were going to be,” he said. “But winning the war? The damage it’s doing, and the citizens, and the innocent people are being killed, it’s awful hard to count that as winning.”

The president also said that American forces would defend Taiwan if it were attacked by China but insisted there was no change to U.S. policy on the island. It was not the first time this year that he made that vow, a seeming break from a long tradition of the United States refraining from taking a posture. And after the president’s interview, White House officials told CBS that the government continues not to take a public position on the issue of committing troops.

Mr. Biden told Mr. Pelley that he had not made a “firm decision” on whether to seek a second term in the White House, though he said it remained his intention. Asked whether, as the nation’s oldest president, he was fit for the job, Mr. Biden replied, “Watch me.”

“If you think I don’t have the energy level or the mental acuity, then — then, you know, that’s one thing,” Mr. Biden said. He added: “I respect the fact that people would say, you know, ‘You’re old.’ But I think it relates to how much energy you have and whether or not the job you’re doing is one consistent with what any person of any age would be able to do.”

“How would you say your mental focus is?” Mr. Pelley asked.

“Oh, it’s focused,” Mr. Biden said, adding, “I have trouble even mentioning, even saying to myself, my own head, the number of years.”

“There’s not things I don’t do now that I did before,” he added, “whether it’s physical or mental or anything else.”