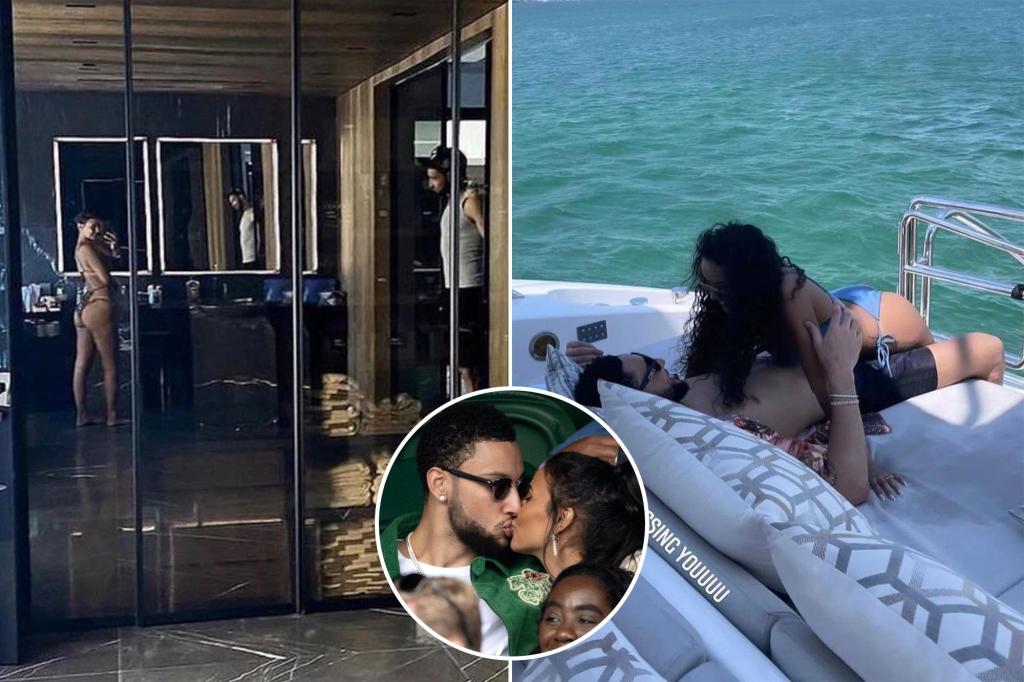 According to Sideaction.com, Jama — who is a British TV star — recently took to her Instagram Story to share a few sultry snaps of the couple, who quietly got engaged over the holidays in 2021.

“Missing youuuu,” Jama, 27, wrote with a teary-eyed emoji over a PDA photo with 25-year-old Simmons.

The couple was pictured on a boat, where Jama lounged on top of Simmons in a blue bikini. They smiled at each other, while the three-time NBA All-Star held onto his fiancée’s arm.

In a separate photo, Jama posed in the reflection of a window in a cheeky, dark bikini. Simmons, meanwhile, was captured off to the side in a white tank top, gazing at his future wife.

Simmons is currently in stateside rehabbing after he underwent “successful” surgery in Los Angeles on May 5 to address a herniated L-4 disk in his lower back. The Nets said Simmons is expected to “make a full recovery prior to the start of next season’s training camp,” which is scheduled to begin in September.

Simmons — whom the Nets acquired from the 76ers in February for James Harden — sat out the entire past season, including Brooklyn’s short-lived playoff run. The Nets got swept by the Celtics in the first round of the NBA playoffs.

The Australian star cited mental health issues in Philadelphia as a reason for not suiting up, and after taking time to ramp up into playing shape for the Nets, his back issues ultimately kept him sidelined.

Nets general manager Sean Marks said earlier this month that the team is committed to “doing everything we possibly can” to get Simmons “around our group” in order to continue building the culture in Brooklyn.

“We will work together with the Nets on a summer plan,” a source close to Simmons told The Post. “Everyone is confident.”

Simmons and his agent Rich Paul recently sat down with Marks to discuss what the team could do to help facilitate his return to the court.

“From the communications I’ve had with him multiple times since the surgery, he’s feeling relief already and feeling great. He knows that, it goes back to that five months, he has a big buildup to get ready and contribute,” Marks said.

“Regarding Ben post-surgery, I don’t want to speak for him, but I can sense there’s a relief. There’s a new lease on life, so to speak. When you are able to take a problem and say that should be fixed and move that out of here and now it’s on to the rest.”