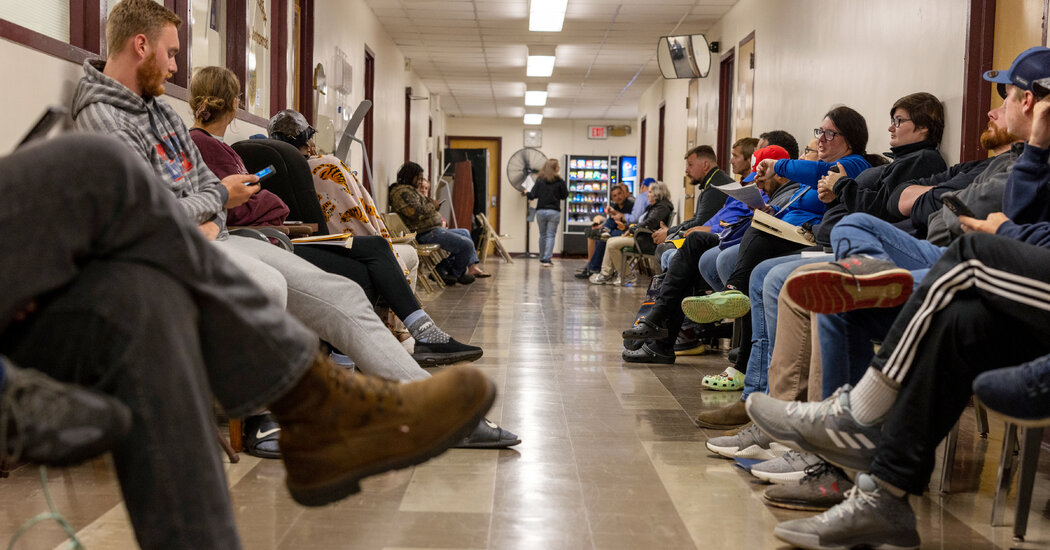 By the time the Niagara County Courthouse opened on Wednesday morning, 150 people were lined up to apply for permits that would let them carry concealed handguns in public. Nearly 100 had camped out overnight, some staying awake in folding chairs and taking regular walks to keep warm.

The crowd represented an impulse that has become visible in much of New York as hundreds attempt to avoid hours of training and paperwork required by a new gun law, many provisions of which go into effect on Thursday.

The state passed the measure in an effort to continue closely regulating weapons after the U.S. Supreme Court in June struck down a century-old law that had strictly limited carrying handguns in public, holding that citizens have a broad right to self protection outside the home.

Since then, New York City has seen a 54 percent increase in concealed-carry permit applications. Oswego County assigned two additional employees to process permits full time. Niagara courthouse officials, who had to divide Wednesday’s crowd into three lines, have handled 150 applications every day this week. And a certified firearms trainer in Suffolk County said that he was fielding as many as 50 phone calls a day from people eager for permits.

“People now are just scrambling to get their applications in,” said the trainer, Matthew D. Seifer. He added that those who had not received a new permit by Thursday — which given a monthslong backlog in much of the state would include many who lined up — would still have to heed the new requirements for concealed carry, including 16 hours of training, as well as providing character references and a list of former and current social media accounts.

Those hurdles may have encouraged the new applicants to try to beat the deadline. But they may not be permanent: They could be scrutinized by the Supreme Court, which is expected to further redefine its already-expanded view of the Second Amendment. Indeed, the new law has already been challenged in federal court, and may eventually be heard in Washington.

In a news conference Wednesday, Gov. Kathy Hochul acknowledged the rise in applications but said she did not expect an immediate increase in concealed weapons, given the time to process applications; the wait could take as long as a year, she said.

But eventually, demand for firearms will harm safety, Ms. Hochul added, noting that under its old law, New York had the fifth-lowest per capita death rate from guns. She called the Supreme Court’s decision “negligent and reprehensible.”

“We’ve been working very, very hard, removing thousands of guns that have been coming into our streets illegally from other states,” she said. “We don’t need guns on our streets.”

People who apply for permits must provide fingerprints to the New York State Division of Criminal Justice Services for a background check. In the nine weeks since the Supreme Court decision, the agency has received an average of 1,719 submissions a week, compared with 845 during the same period last year. In the past three weeks, that average has climbed to 2,452. While not all of those submissions indicate a permit application, let alone a successful one, they help illustrate demand.

Kevin Dix, a retired sheriff’s deputy who has worked as a firearms instructor in central New York for over 20 years, said interest in his class has reached an all-time high.

“I see the whole parking lot filled up with cars,” he said. “I got to the point where I told people to bring their own lawn chairs.”

In most counties, those who already have permits can recertify them with the state police in a straightforward process that can be completed online. That has led officials to believe that the lines upstate consist mostly of new applicants.

In New York City, and Suffolk, Nassau and Westchester counties, licenses must be renewed every three years, a far more burdensome process that will require permit holders to meet the same requirements as new applicants.

The rush of submissions was unsurprising to experts. “Anything that implies that it’s going to be harder to get a gun tomorrow than it is today leads to a lot of people going out and trying to get guns,” said Jonathan Metzl, the director of the Department of Medicine, Health and Society at Vanderbilt University, whose research focuses on guns in America.

The new rules — which also bar the carrying of guns in a large number of “sensitive locations” including mass transit, parks, and playgrounds — have rankled some gun sellers. Bill McGuire, 73, the owner of Interlaken Guns & Ammo on the Finger Lakes town’s Main Street, said the new law was unconstitutional.

“The people with pistol permits are some of the most honest people in the whole state,” said Mr. McGuire, who was wearing a holstered Kahr P40 semiautomatic pistol, one of 16 handguns he owns. “Why? Because if they violate the law, they’re going to have their permit taken away from them, and they don’t want to lose it.”

The new law, which also makes carrying guns illegal in private businesses unless they signal otherwise, has set off the opposite concerns downstate. For many people, the idea of guns in public represent what Carmen De La Rosa, a city councilwoman who represents neighborhoods in Upper Manhattan, called a “culture shift.”

“I don’t want to imagine a New York City where people are just willy-nilly carrying around firearms,” she said. “It’s a scary prospect.”

At the news conference with Gov. Hochul, Mayor Eric Adams of New York City noted that the police had recovered about 4,700 illegal guns so far this year and that there had been more than 1,200 shooting victims in the city through the end of August.

“The Supreme Court has taken dead aim at New Yorkers,” Mr. Adams said. “They have placed us in the line of fire.”

Mr. Seifer, the firearms trainer in Suffolk County, said that the new law may discourage those who would carry guns into New York City. He said that he was advising clients to keep their weapons locked in their cars when they visited. Given the density of sensitive locations in the city, he said, and the rules about private property, they could be courting trouble.