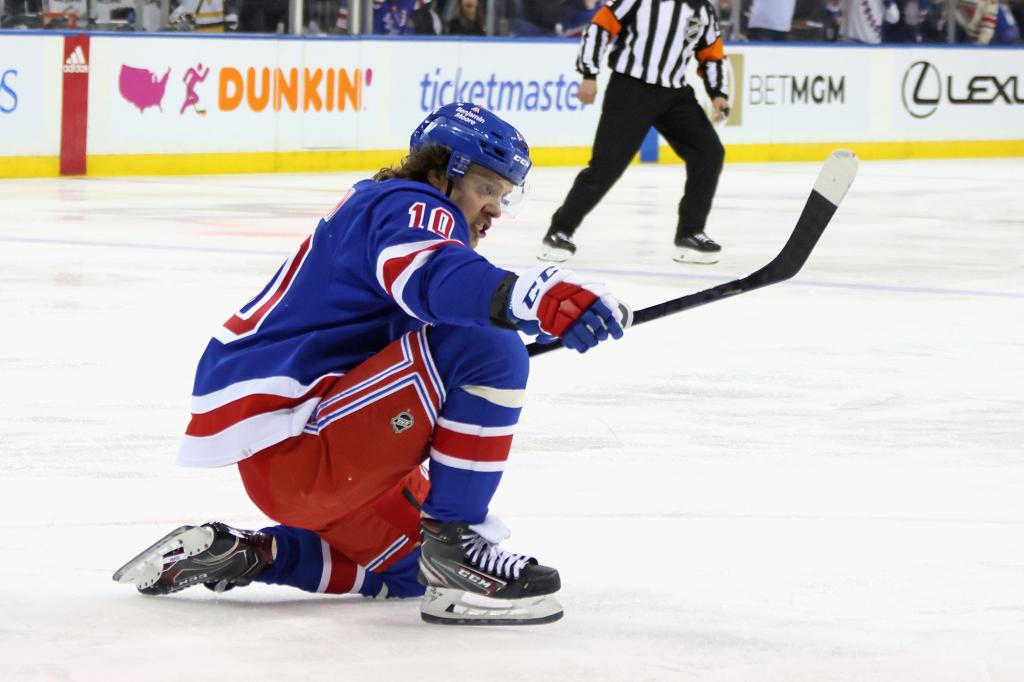 When the Rangers were headed into overtime of Game 7 against the Penguins on Sunday night at Madison Square Garden, head coach Gerard Gallant said he knew who was going to score the game-winning goal for his team if it was going to happen.

Artemi Panarin proved his coach right when he whipped the puck from the top of the right faceoff circle and past Penguins goalie Tristan Jarry to secure a 4-3 OT win for the Rangers, who now have a date with the Hurricanes in the second round.

When asked what he saw on his game-winner, Panarin held his hand up in front of his eyes and said, without the help of a translator, “black picture.” The curly-headed Russian had a big smile on his face, of course.

“Overall, honestly, they’ve been letting me shoot since the first game,” he continued through a translator. “Kind of my bad, I haven’t really been making those shots. But maybe I should listen to everyone’s advice and actually get out there and take shots.”

Despite recording three goals and four assists in the series, Panarin hadn’t been his usual dynamic self. In Game 7 in particular, the star winger struggled and had a couple of forced passes turn into turnovers.

Still, Panarin made an impact on this series and was the Rangers’ hero in the biggest moment.

Post Sports+ members, sign up to have Mollie Walker text you the latest word on the Rangers and reply with your thoughts and questions. Not a Sports+ member yet? Try it now.

“It was a really stressful game,” he said through the translator. “There wasn’t that much room on the ice.”

Gallant pointed out that the ice was in rough shape after the Garden hosted a concert Saturday night and the puck was extremely bouncy which, the coach said, affects Panarin’s game more than other players. But Panarin looked like he felt that game-winning shot all the way through.

“It’s just who he is,” Jacob Trouba said. “I think a little quirky, but I kind of get the same feeling listening to what he’s going to say. Thinking you don’t know what Bread’s going to say or what he’s going to do and what he’s capable of. He does it all, especially for this group. For being such a high-skilled, talented player, he doesn’t act like it.

“He’s just another guy, another player on the team and that’s a pretty cool thing for a guy of that level. Happy to have him.”

The Rangers won their first playoff series since the first round in 2017 against the Canadiens and notched their 54th all-time series win. While improving to 3-5 against Pittsburgh all-time in playoff series, the Blueshirts also are now 10-6 (.625) all time in Game 7s and 8-1 (.888) at home in Game 7s.